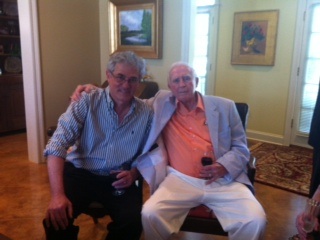 (Yours truly and Bill Minor together at his 90th birthday party)

An array of friends, family, activists, journalists, judges and politicians gathered Sunday to celebrate the 90th birthday of the “dean” of Mississippi journalists, Bill Minor, who continues to pummel the antics of political neanderthals in his syndicated column across Mississippi.

It was an event that truly celebrated the life a journalist who has suffered far more than his share of slings and arrows over the years, a righteous believer in social justice who has always seen his profession as a calling and a mission in a state where many of the nation’s most egregious assaults on justice have taken place.

With his wife Gloria by his side, Minor recalled his days in the U.S. Navy during World War II and joked about the many political enemies across the state who probably would like to “drop a bomb” on the birthday proceedings. It was a party filled with lots of good laughter, memories and awareness of the battles and wars still to be fought in Mississippi.

An especially poignant moment in the celebration came when Minor received a call from his son Paul, who is serving an eight-year prison sentence on judicial corruption convictions, a case fraught with political implications given Paul Minor’s previous role as a major contributor to the Democrat Party and one of the trial lawyers who helped bring about a multi-billion-dollar settlement with Big Tobacco in 1997. Paul Minor gave his father a wonderful tribute, comparing him to a fine wine that grows better with age.

A Louisiana native, Bill Minor covered one of the South’s most colorful characters and politicians, “Uncle” Earl Long, in the Pelican state but found his true calling when he set up shop as the New Orleans Times-Picayune correspondent in neighboring Mississippi in 1947. His first story at the bureau was the funeral of Mississippi’s notoriously racist U.S. Sen. and former governor Theodore Bilbo.

Over the next six decades, Minor covered every conceivable story in a state that made headlines throughout much of the civil rights movement. He covered the rise of the Dixiecrats in the 1948 presidential election, the trial of J.W. Milam and Roy Bryant for the murder of 14-year-old black youth Emmett Till in 1955, James Meredith’s enrollment as the first black student at the University of Mississippi in 1962, the murder of activist Medgar Evers in 1963, the “long, hot summer” of 1964 when three civil rights activists were murdered in Neshoba County, Mississippi.

Even when “the network crews, big city reporters, and photographers” no longer roamed “the state in packs” after the last of the bloody excesses of Mississippi’s response to the civil rights movement, Minor stayed put rather than move on to a big city newspaper up North. He covered the rise of the Republican Party in Mississippi and the South, the so-called “Sunbelt” era, and the eventual Republican rise to dominance that has once again put the squeeze on minorities through anti-immigrant demagoguery and “Voter ID” bills.

Fifteen years ago, as the first recipient of the John Chancellor Award for Excellence, Minor wrote, “there is respect for longevity and continuity in reporting from the same outpost, through good times and bad.”

Indeed. No parachute journalist here. Just a good man who made a commitment and stuck with it, much like the muckraking journalists of a century ago, the Steffens and Tarbells who didn’t walk away from a story until they had told all of it.

I’ve been an admirer of Bill Minor ever since I first arrived in this state in the early 1980s. I remember how he inspired me by reminding me that “this is the frontier,” and in so many ways it still is. I recall my pleasure when learning that Minor had once crossed paths with another journalist I’ve always admired, A.J. Liebling.

As recalled in his classic book, The Press, Liebling was shocked to read Minor’s story in the Times-Picayune in the late 1940s about Mississippi’s reaction to a bus drivers’ strike by creating a state Bureau of Investigation, the MBI, a “secret special force … to have the right to arrest without warrant any person whom they suspected of intent to interfere with a bus line, and to search him.” Liebling called Minor a “straightforward reporter” and praised him for reporting a story that should have been reported across the country.

Given the federal government’s own recent record of arrests and imprisonment without trials and, in some cases, even formal charges, perhaps Mississippi was ahead of its time. I’ve got a feeling Bill Minor sensed that could be the case, and that’s one reason he stayed in Mississippi.