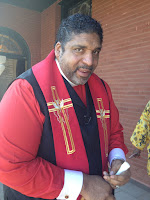 (The Rev. William Barber II in Selma in May 2015. Photo by Joe Atkins)

I met the Rev. William Barber II in Selma, Alabama, back in 2015. He’d come there from his home in North Carolina to commemorate the 50th anniversary of the bloody march by civil rights advocates across Edmund Pettus Bridge.

“We’re here to honor the memory of the sacrifice,” Barber told me. “The very things they marched about have been gutted.”

Launched with a mule-cart procession in tiny Marks, Mississippi, King’s campaign was totally in sync with his efforts to help the striking sanitation workers in Memphis that year because the campaign’s goals were economic: a basic income that’s guaranteed, capital availability for minority and small businesses; and full employment.

“The duty of the living is not simply to recall the martyrs of the movement but to continue their work,” New Yorker magazine quoted Barber saying in a recent profile by writer Jelani Cobb.

Indeed, even many Trump supporters, Wall Street Republicans, and Tea Partyers pay homage to past civil rights gains, and the pages of their media organs offer praise for King on his government-designated day each year. As for the economic justice he sought in his last years, however, the silence is deafening.

In addition to his many other roles, Barber, 54, is also pastor of Greenleaf Christian Church in Goldsboro, North Carolina, one of the poorest cities in that state and not far from where this Labor South correspondent grew up.  Goldsboro is the fifth poorest city in the United States with 25 percent of its population mired in poverty, with estimates ranging from 40 to 65 percent of its children poor.

The powers that be on Wall Street, in Washington, D.C., and in state capitals across the land talk a lot about diversity, jobs, freedom. Talk. Big corporations like Nissan compromise organizations like the national office of Barber’s own NAACP with big handouts to keep them from the nitty gritty issues of fairness and equity at the workplace.

Barber, arguably the most dynamic civil rights leader in America today, sees through all that, however, and he’s committed to making others see through it, too.