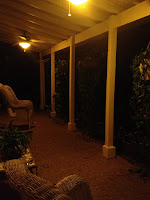 (To the right, my front porch. It's dark in Mississippi.)

This column, which appeared recently in the Jackson Free Press, in Jackson, Miss., is a follow-up to an earlier Labor South posting in which I republished the original 2011 column cited below. Here I take a look at Mississippi and my native North Carolina, both the heart of darkness in their politics these days.

Yes, I did. It was way back in November 2011 when the Republicans took over the Mississippi Legislature as well as the state’s Governor’s Mansion.

At the time, I was telling you about relatives coming to visit me and one of them remarking how “it sure is dark in Mississippi.” She was referring to the long, unlit roads and highways they traveled during the night to get here. “It’s about to get a lot darker,” I told her.

And then I told you, my column readers, this:

“Better roads and highways? Not on this watch. Better public transportation? Education? Health care? Mental health services? Social services? Are you kidding? It’s going to be Tea Party heaven down here. People finally get to see what it will be like in a Tea Party world.”

Thank you, Mississippi Gov. Phil Bryant, Lt. Gov. Tate Reeves and state House Speaker Philip Gunn for proving what a prophet Joe Atkins is. I always knew it. Now the world does!

In the poorest, most woe-begotten state in the United States, the Mississippi Troika and their loyal minions have managed to cut even deeper into woefully underfunded state education, health care, mental health care, roads and highways maintenance. As they slashed away at agency budgets like machete-wielding tribesmen clear-cutting a scraggly forest to make way for more desert, they even found they had overestimated revenue projections by $56.8 million!

And this is the state government that wants to take over the Jackson, Miss., airport. One of the minions at the state Capitol has even proposed that the state take over all of Jackson, that black-run state capital that’s wont to challenge the Tea Party revolution from time to time. State Rep. Mark Baker, a Republican from Brandon, came up with that brilliance. Should we call it “Revenge of the Suburbanites”?

As they slashed budgets and services, however, the Troika and its minions did manage to find the wherewithal to give $274 million plus lots of juicy tax breaks to Continental Tire the Americas and Edison Chouest of Louisiana, two more companies promising jobs and Nirvana in exchange for big taxpayer-funded handouts. They both saw the $363 million handout poor ol’ Mississippi gave Nissan back in 2000 and the $356 million it gave Toyota a few years later, and they wanted their share.

At the time of the Toyota deal, the state wouldn’t even fund a burn center and had to send burn victims to Memphis.

The state’s pols also managed to kill efforts to limit themselves in how they spend their campaign money, making them the envy of politicians across the country who face jail terms for doing what Mississippi politicians can do with impunity.

Something else they did during the past legislative session, of course, was make discrimination legal and call it the “Protecting Freedom of Conscience from Government Discrimination Act”.

When I first arrived in Mississippi back in the early 1980s, many folks told me how much they admired my home state of North Carolina. They talked about the beautiful mountains and beaches. Many talked with a degree of envy about North Carolina’s longheld commitment to public education and wished Mississippi were more so inclined.

Well, here we are more than three decades later, and we find Mississippi politicians actually are looking at North Carolina as a model. Trouble is, North Carolina today is a Jesse Helms dream come true—and that’s not a good thing.

The Tarheel state’s so-called HB2 legislation, known as the “bathroom bill”, preceded Mississippi’s HB 1523 (now the Protecting Freedom of Conscience from Government Discrimination Act) in putting state authorities on bathroom detail. North Carolina leaders took it a step further, however, by also making it illegal for troublesome cities such as Charlotte (where the whole bathroom controversy began) to adopt regulations contrary to what state rulers prefer. This includes raising the minimum wage, an issue far removed from gender identity.

So both North Carolina and Mississippi share something besides a strong connection to Joe Atkins. Their leaders are the kind of hypocrites my Pentecostal Holiness preaching Uncle Eb would’ve raked over the coals in his Sunday sermons. They talk of the sanctity of local government when it comes to defying federal mandates, but they’re quick to impose state rule over municipalities, whether it’s a minimum wage hike in Charlotte or airport control in Jackson.

Don’t let anyone pull the wool over your eyes. It’s already dark enough in Mississippi.

Posted by Joseph B. Atkins at 3:10 PM No comments: