The peasants and workers in Maxo Vanka's murals still haunt us 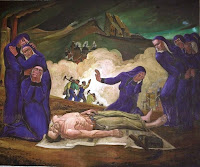 With the G-20 world economic summit and national conventions of the AFL-CIO and International Labor Communciations Association taking place in Pittsburgh in September, I thought I'd post a column I wrote from Pittsburgh during the Working Class Studies Association Conference this past June. It deals with the striking Depression-era murals of Croatian artist Maxo Vanka in the St. Nicholas Croatian Catholic Church in Pittsburgh.

PITTSBURGH, Pa. – Entering the St. Nicholas Croatian Catholic Church is not for the faint of heart. The church interior is dark, and its walls covered with murals featuring the large-eyed Slavic faces of the Balkan peasants who came to this area a century or more ago to do the back-breaking work that steel mills and coal mines demanded.

As parishioner and preservationist Diane Novosel says, “It’s not your typical pretty church.” St. Nicholas is beautiful, haunting, provocative, but hardly pretty. There’s too much suffering—Mary at the feet of the crucified Jesus, the Croatian mother weeping for her dead son as her other three sons march off to their deaths in the coal mines, the soldier’s mother mourning over her son’s coffin.

The walls of St. Nicholas, a hilltop church in the community of Millvale, bear stark witness to the evils of the world outside—the fire-breathing mills that consumed the hopes and dreams of the immigrants who worked in them, the wars that sent their sons off to die in foreign lands, the greed-filled capitalist dining alone with his stock reports, his servant, and the beggar at his feet.

The 26 murals of St. Nicholas are the work of Croatian artist Maxo Vanka, who painted most of them in a brief frenzy of inspiration during the height of the Great Depression, and, for me, seeing them was a signature moment in my recent visit to this city, which for so long was the embodiment of America’s industrial might.

Once a city of smokestacks, polluted air, and foul rivers, Pittsburgh has reinvented itself into a “green” center whose major industries today are medicine, education, and banking. Downtown sparkles with shiny skyscrapers and bustling streets. Yet, with a population of 300,000, it remains only half its former size, and local folks lament that many of its young are still forced to leave to find jobs the new industries don’t provide.

The monuments to its most-famous industrialists, Andrew Carnegie and Andrew Mellon, seem to be on every corner—universities, libraries, parks, the large, imposing structures that testify to the might of capital. Harder to find are the monuments to the laborers martyred by the brutal excesses of capital and its demands for a workforce willing to work long, hard, mind-numbing hours for near-starvation wages.

I went to the site of U.S. Steel’s old Homestead Works, a 300-acre operation that produced over 200 million tons of steel in its 105-year history and employed at one time 20,000 workers. Silenced since 1986, Homestead was also the site of one of the great labor battles in U.S. history, the 1892 conflict that pitted union steelworkers against an anti-union Carnegie and his armies of Pinkerton agents and state militia. Ten died, many more were wounded, and the workers, despite beating back the Pinkertons, lost.

Today the Pump House where the killing took place is an historical landmark, a modest brick building overshadowed by U.S. Steel’s nearby research and development center.

Near downtown Pittsburgh is an historical marker on a lonely traffic island at the 28th Street crossing, where a militia from Philadelphia fired into a gathering of citizens during a railroad strike in 1877 and killed 20 people. The crowd was protesting wage cuts.

Preservationists fought long and hard for that marker and to keep the Pump House from the wrecking ball.

The artist who created the murals of St. Nicholas was an angry man filled with the kind of righteous indignation that one finds in the great prophets of the Old Testament, the bearded ancients railing against the mighty who, as Jeremiah said, “builds his house on wrong, his terraces on injustice, works his neighbor without pay, and gives him no wages.”

Today, more than a century after the Homestead battle, the history is largely forgotten—or suppressed, yet the mighty still swagger about the land, and the workers are suffering wage cuts and job losses in a faltering economy whose failures they did nothing to cause. Where is the anger of Maxo Vanka? Who’s gathering in the streets to protest the injustice brought about by the rank greed of a few? The streets sometimes seem as empty and forlorn as the little traffic island at the 28th Street crossing.

Maybe they’ll fill on Sept. 24 and 25, when Pittsburgh hosts the G-20 world economic summit. Leaders of the world’s industrial nations will gather to discuss the fate of the global economy. Maybe the spirit of the martyrs of the Pump House or the 28th Street crossing and the anger of Maxo Vanka will be awakened. If so, it won’t be an occasion for the faint of heart.
Posted by Joseph B. Atkins at 5:06 AM No comments:

Let's take a quick look at some of the recent labor activities and debates around the South and beyond.

Big news came out of Savannah, Georgia, this week when the U.S. Chemical Safety Board issued a report putting the blame squarely on the Imperial Sugar Co. and a foot-dragging U.S. Occupational and Health Administration for the Feb. 7, 2008, explosions and resulting fires that killed 14 and injured dozens of others.

The report said the tragedy was caused by the combustible sugar dust allowed to accumulate at the plant. OSHA waited until this year to finally pass new rules to prevent such hazards. The Savannah Morning News, which has been covering the incident closely, quoted Evan Yeats of the United Food and Commercial Workers International Union as saying OSHA's long-delayed action was merely a "public relations maneuver" and that regulations will have no teeth for years to come unless the agency approves an emergency rule in the case.

The killings of union leaders and other crimes and human rights abuses in the South American nation of Colombia have raised questions about the role of the Birmingham, Ala., coal company, Drummond Co. In fact, this past week the United Steelworkers Union called on Secretary of State Hillary Clinton to investigate illegal activities at Drummond's Colombian coal mine.

Labor organizers risk their lives everyday in violence-torn Colombia. Some 400 union members were killed there between 2002 and 2008. Officials and friends of the U.S.-backed Uribe government in Colombia are under investigation for possible connections to some of the killings. Drummond's own role in this murky story has yet to be determined, but a Colombian labor union sued the company in 2002 after three union leaders at its plant were tortured and murdered.

Alabama Power and other companies serving customers in Georgia, Florida, and Mississippi get coal from Drummond.

My good friend Stephen Jackson, associate editor of the Latin American Post in Bogota and a professor of journalism at Stillman College in Tuscaloosa, has been following this case and was even subjected to a gag order issued by a federal judge in a related international tort trial in Birmingham in 2004.

In Memphis, Tenn., this month, a trash buildup led city public works director Dwan Gilliom to accuse AFSCME Local 1733 members of conducting a work slowdown in protest of recent new additions to their workload. Local 1733 President Ruth Davis deferred comment until she talked with all the members. The city's sanitation workers became part of labor lore in 1968 when they led a strike that brought the Rev. Martin Luther King Jr. to Memphis in a show of support. King was assassinated during that visit.

My old radical friend in New York City, labor writer and activist Martin Fishgold, editor of The Unionist, AFSCME Local 371,
maintains a healthy skepticism, however. He says any real change in direction by the nation's largest labor organization won't come until it recognizes the need for a renewed sense of militancy in the labor movement and more grassroots involvement by labor leaders themselves in the real lives and challenges of working people.

The crisis in the movement "has been facing organized labor for years, at least since the CIO kicked out the most militant unions in the early 1950s to prove what good Americans we union members all are," Fishgold wrote in a recent exchange on the "labor_communicators@googlegroups.com" listserv in New York. "Corporate unionists are still trying to prove it, to our detriment."
Posted by Joseph B. Atkins at 2:52 PM No comments: