From Justinian's day through the "Black Death" of 14th century Europe, Shakespeare's locked-down London, "Yellow Jack" in Memphis, and today, pandemics and epidemics have been part of our human history, one that hits the poor the hardest as the princes of the world escape to their castles 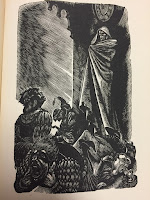 (To the right, artist Fritz Eichenberg's wood engraving for Poe's The Masque of the Red Death)

Fun-loving Prince Prospero wanted to have a party. Sure, the Red Death had killed half the population of his princedom, and the pestilence threatened to kill the other half with a horrid grip that forced streams of blood through their very pores. Leave the peasants to deal with it, the prince said as he invited a thousand of his fellow nobles to a masked ball at his castle.

Thus begins The Masque of the Red Death that writer Edgar Allan Poe published in 1842, a scant 11 years after a cholera epidemic had devastated Baltimore, the city where he himself would die in 1849, and much of the rest of the world. As the story unfolds, Prince Prospero learns that even he and the landed gentry at his party could not escape the pestilence. Among the masqueraders was a “tall and gaunt” figure “shrouded from head to foot in the habiliments of the grave.” And so it was. The Red Death had come to the prince’s ball, and soon the prince and all his friends would lay at its feet, as dead as all those peasants beyond the moat of his castle.

As the world today wrestles with the Covid-19 pandemic that has taken hundreds of thousands of lives and sickened millions more, a look through human history and accompanying body of literature reveals that such events, whether pandemics or epidemics, have always been part of the human experience.

Here in the U.S. South, one of the most horrific examples—detailed in an earlier Labor South post--took place in Memphis, Tennessee, in 1878. A yellow fever epidemic, known as “Yellow Jack” and spread by mosquitoes that had traveled up the Mississippi River from New Orleans and which likely was brought to the Americas by the African slave trade, nearly destroyed the city of Memphis. Among the 20,000 left after a mass evacuation, 17,000 got sick and 5,000 died. A disease that produced “black vomit” as it destroyed internal organs, Yellow Jack left a city of “rotten wood pavements … dead animals, putrifying human bodies and the half-buried dead,” in the words of one physician who had been in the city.

The high-living Prosperos among the wealthy cotton moguls who ruled Memphis may have loved their mint juleps at the Peabody Hotel, but they had provided scant services for the city, allowing sewage to run through the streets and garbage to go uncollected. When the pestilence came, they blamed the poor Irish workers who populated the crude shanties along the river. Those Irish would be among the first to die.

History records pandemics in ancient Rome and Constantinople, where the Emperor Justinian himself in 542 A.D. became a victim of the bubonic plague—spread by rat fleas. It didn’t kill him, but it did countless of his subjects.  The plague would return many times to Europe and Asia. Called the “Black Death”, it wiped out one third of Europe’s population between 1347 and 1351.

As described recently in a New Yorker piece by Elizabeth Kolbert, war and protest and even revolution have often contributed to or resulted from the spread and devastation of epidemics. People took to the streets of St. Petersburg, Russia, in 1831, to protest the government handling of the cholera epidemic there. Toward the end of the century, riots after another cholera outbreak would spread from St. Petersburg to the Ukraine, planting a seed in the revolution that was to come.

Spanish explorers brought smallpox to the New World in the early16th century, devastating the indigenous population and helping to inspire the toppling of statues of Christopher Columbus today. 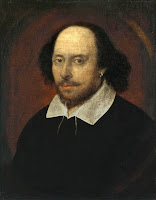 The literature of pandemics is rich and informative. On April 23, 1564, Willliam Shakespeare was born into an English town that would lose a fifth of its population to the bubonic plague before his first birthday. The plague would leave and then return many times over the course of his life, closing down his Globe Theatre and other London theatres, too, as all but the city-bound poor fled. Shakespeare wrote Macbeth during his own quarantine, and the play’s description of a “poor country, almost afraid to know itself … our grave” may have referred to Macbeth’s Scotland but is imbued with the writer’s experience of the plague.

In fact, the plague contributed to Romeo and Juliet’s suicide. Fear of it prevented the message getting to Romeo that the potion Juliet took did not poison her but only put her to sleep. And we all know how that ended. 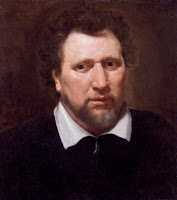 Shakespeare’s contemporary, Ben Jonson, sets his play The Alchemist in plague-ridden London around 1610 where “the sickness hot, a master quit, for fear, his house in town, and left one servant there.” Yep, the master’s left town. Let the servant deal with the plague.

The history of pandemics and epidemics—including the deadly 1918 flu pandemic--reveals certain threads that weave their way through the entire record of human existence. Often first to die are the poor, as the landed gentry escape to safer confines. Political failure to provide the people with the necessary means to combat the pestilence stretches across the centuries. And, yes, the Prince Prosperos of the world are still among us.