Russian dissident journalist and rock music pioneer Artemy Troitsky at the University of Mississippi weighing in on Putin, Ukraine, and rock music in Russia 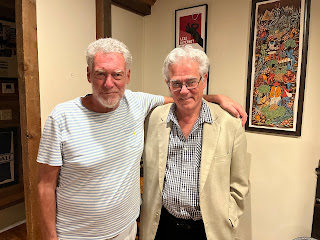 Vladimir Putin’s Russia is “getting similar to the Stalinist period” in Russia’s history, and “the Stalinist period was a nightmare,” dissident Russian journalist and pioneer rock music writer and promoter Artemy Troitsky told students at the University of Mississippi this week.

The 67-year-old Troitsky, a sharp critic of the Putin regime whose views have forced him into exile in Tallinn, Estonia, came to Oxford, Mississippi, to visit friends and spoke at my Media History class at Farley Hall on the University of Mississippi campus Thursday, August 25.

The war in Ukraine that began this February “is a huge catastrophe to Ukraine but also for Russia,” Troitsky told students and faculty. “Russia has become a pariah state. In the Soviet Union we had several phases—Lenin, Stalin, Brezhnev, Gorbachev. During the Cold War, there was at least a degree of respect (for the Soviet Union as a nation), an enemy, yes, but not a stray dog, a bandit.” 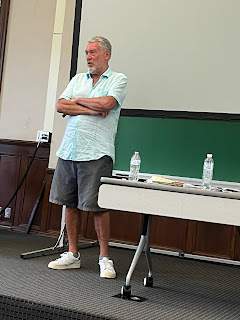 (Artmy Troitsky lecturing at the University of Mississippi)

Troitsky is a legendary writer and commentator whose efforts to promote rock music in the 1970s made him Russia’s premier music writer and promoter. He led discos at Moscow State University in the early 1970s, played guitar with the rock ban Zvuki Mu, co-founded the label General Records. Over the years he has interviewed musicians such as Mick Jagger, Paul McCartney, and David Bowie.

Known worldwide for his political views as well as his music writing, he is the author of the classic Back in the USSR: The True Story of Rock in Russia (1988) and other books.

Early on, authorities largely ignored rock music as merely Western decadence. Later, as it grew in popularity in Russia, it became more controversial and under the watchful eyes of the powerful.

However, it is mostly Troitsky’s political views that have gotten him into trouble. After several lawsuits were filed against him in 2011, musicians helped organize a benefit concert. Twenty-three musicians joined to record an album titled For Troitsky in his honor.

Today, he lectures in Estonia, Finland, England, and other countries, and has a music program on Radio Liberty as well as a videoblog.

“I’m absolutely sure Ukraine is going to win the war,” he said. “They are hugely motivated. The question is what will happen afterward. Russia cannot win against the whole free world.” However, he added, “Russia will not be occupied.”

In my discussions with Troitsky, I told him my own views of the war and the complicity of the United States and NATO in starting the war—the expansion of NATO to Russia’s very borders, the U.S. role in the 2014 coup d’état in Ukraine that ultimately led to the pro-Western leadership of Volodymyr Zelensky, Zelensky’s failure to abide by the Minsk Agreement that would have allowed autonomy in the Donbas region of eastern Ukraine and eased Russian concerns about an anti-Russian military buildup there. Furthermore, I don't believe Ukraine will win this war. There needs to be a negotiated peace.

As Labor South readers know, I’m also concerned about Zelensky’s corruption, the right-wing elements in his regime that recently gutted worker rights in Ukraine. I have no illusions about Putin, however. Putin has gutted press freedom in his country and silenced or jailed his political critics. In the first eight years of his two-decade rule, some 13 journalists were murdered in Russia under mysterious circumstances. These include the crusading Putin critic Anna Politkovskaya, a former colleague of Troitsky’s at the Novaya Gazeta.

Troitsky looked at me with a silent nod, and we shook hands.

Posted by Joseph B. Atkins at 3:48 PM No comments:

I. F. Stone would have told the truths about the war in Ukraine that mainstream corporate media won't tell 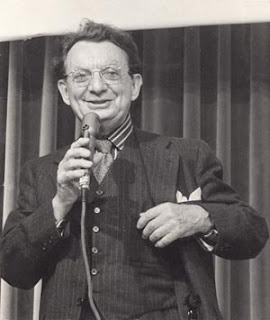 I.F. Stone, the crusading underground journalist who got rejected from the National Press Club for telling truths that mainstream journalists wouldn’t tell, once had this to say about the corrupting influence of close ties between media and government:

“You’ve really got to wear a chastity belt to preserve your journalistic virginity. Once the Secretary of State invites you to lunch and asks your opinion, you’re sunk.” It’s those private lunches and meetings where “highly confidential (and one-sided) information is ladled out to a flattered elite.”

For this reason, Stone, who died at the age of 81 in 1989, eschewed press conferences as “brain washings” and power lunches with the powerful. “All governments lie, but disaster lies in wait for countries whose officials smoke the same hashish they give out.”

Too bad Stone isn’t around any more to prove the lie to much of what is being reported these days about the war in Ukraine. Not since the days of U.S.-led NATO’s invasion of Serbia in the late 1990s has there been such jingoistic reporting from “a flattered elite” ladled with one-sided information.

Though the U.S. and European public rarely, if ever, gets a complete, multi-sided view of the war in Ukraine from mainstream media, whether it’s the New York Times, Washington Post, CNN, MSNBC, CBS, Fox, or the BBC in England, the Ukrainian people themselves know what’s going on. A recent poll showed that 82 percent of Ukrainians, of course, blame Russia for the war, but more interestingly 58 percent of them believe the United States bears responsibility as well. NATO fares little better with 55 percent of Ukrainians blaming it in some measure for the war.

Those are not the kind of poll statistics you’ll read about in corporate mainstream media. One has to turn instead to news outlets like FAIR (Fairness & Accuracy In Reporting) and its newsletter EXTRA!, Consortium News, or to YouTube to see the Jimmy Dore Show or Breaking Points.  Reporters Glenn Greenwald, Matt Taibbi, Robert Scheer, and Chris Hedges keep the I.F. Stone tradition alive. Not the New York Times or Washington Post, and certainly not MSNBC or Russophobe reporters like Rachel Maddow. Ironically, one of the few mainstream journalists who has truly probed the causes and truths of the war in Ukraine is conservative Fox commentator Tucker Carlson.

Let’s have some examples.

(To the right, Volodymyr Zelensky) 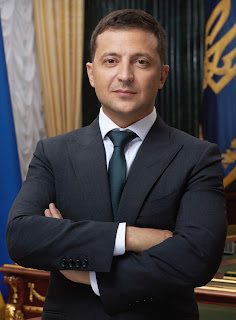 Ukrainian President Volodymyr Zelensky’s ruling Servant of the People party has pushed through legislation in the nation’s parliament that will gut workers’ rights, using the war with Russia as an excuse but continuing the deterioration of those rights that has been a feature of Zelensky’s rule. Not a word about this in U.S. mainstream media. To get that story a reader has to go to a news outlet called OpenDemocracy.

OpenDemocracy reporters Thomas Rowley and Serhiy Guz quote the party’s official line that “extreme over-regulation of employment contradicts the principles of market self-regulation (and) modern personnel management.” Furthermore, the change in labor laws is needed to allow “the self-realisation (sic) of employees and for raising the competitiveness of employers.”

This is also the party line of the International Monetary Fund, World Bank, and European Union, where “austerity” is preached and the taking down of government safety-net programs is demanded when countries, like Greece in recent years, get into economic trouble and need assistance.

Where are the ace reporters of the elite media of the United States and Europe when the issue is corruption in Ukraine or the fate of the billions in Western military arms that have been sent into what has been the most corrupt country in Europe? Chronicles journalist Pedro Gonzales has reported at some length on Zelensky’s off-shore financial holdings and his relationship with Ukrainian oligarch/kingmaker Ihor Kolomoisky. Gonzales’ sources included the so-called “Pandora Papers” compiled by the International Consortium of Investigative Journalists.

Zelensky’s nationalization of TV news and restriction of opposition parties also received only passing coverage in American media as if such coverage is reserved for the Russian side of the war.

FAIR recently published a study that showed the slanted coverage the New York Times has given the war in Ukraine compared to the U.S. invasion of Iraq. The Ukraine invasion received nearly twice the front-page, mostly top-of-the-fold coverage that the Iraq invasion received in the first months of the two wars.

Of course, what’s also missing in the mainstream coverage is a sense of history about what is going on in Ukraine, a detailed explanation of the 2014 coup that forced a Russia-leaning president out of office and replaced him with Western-leaning heads of state and eventually Zelensky. Little attention has been given to broken promises to Russia by NATO not to expand eastward, its betrayal of its supposedly defensive identity in the invasions and wars in Serbia, Syria, and Libya. Remember U.S. threats of war when the old Soviet Union wanted to put missiles in Cuba back in 1962? Of course, it’s a different story when it’s Russia’s reaction to NATO’s threats to arm Ukraine on the Russian border.

Mainstream corporate-owned media in the United States are part of the same “Deep State” that has dominated both Democratic and Republican administrations for decades. Their reporters and editors wine and dine with the same Deep State operatives that give marching orders to members of Congress and presidents. The failures of the Deep State in Vietnam, Iraq, Afghanistan, and Libya in the name of preserving U.S. hegemony matter little so long as the weapons industry is kept happy and prosperous and the dream is kept alive that the United States will remain a shining capitalist citadel that oversees the world.