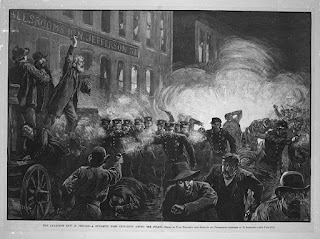 
It's May 1, the true Labor Day, and plenty of working folks around the world are protesting, marching, waving banners and signs, publicly acknowledging and supporting the long struggle that has gone on and still continues for their rights. They need to be loud and united because that's the only way politicians and the corporate media will pay attention.

Otherwise, it's not on their agenda.

Working people are the agenda of Labor South, however. I will be posting a piece this week about Walmart and its shenanigans in Latin America, as exposed in the recent investigative piece by the New York Times (okay, some corporate media still produce good investigative work!). Another story coming soon will deal with the scandal of student college loan debt.

May is, of course, a month rich in symbolism for workers. It was during a post-May Day labor gathering at Haymarket Square in Chicago in 1886 that a bomb was thrown, killing 11 people and leading to a severe crackdown on labor activity and the turning of public opinion against unions. The press had a lot to do with that, pointing an accusing finger at union organizers with scant regard for evidence. Eight men were convicted in the bombing, only two of whom were even present during the protest and none of whom was directly linked to it. Four of the eight were eventually hung, and a fifth committed suicide in jail.

The Haymarket Affair prompted a global reaction with protests in England, Holland, Russia, Italy and Spain. Six of the eight convicted men were German immigrants, prompting German Chancellor Otto von Bismarck to ban public meetings for fear of an outbreak of violence.

At the trial of the Haymarket Eight, the state attorney told the jurors that "these men ... are no more guilty than the thousands who follow them." However, he said, "convict these men, make examples of them, hang them and you save our institutions, our society." Check William J. Adelman's Haymarket Revisited for the full story.

What were the labor protests at Haymarket Square all about? The eight-hour day. Yes, workers wanted an eight-hour workday, rather than a 12 or 14 or 16-hour workday.

And now in the Jackson Free Press ... By the way, my columns will soon appear in the Jackson Free Press in Jackson, Miss., along with the other publications that often run them, such as the Institute for Southern Studies' Facing South in North Carolina and The Progressive Populist in Texas. The Jackson Free Press is Mississippi's premier alternative newspaper, a feisty weekly committed to old-style crusades for social justice in a state crying out for just that. I'll be proud to have my writings in those pages, as I am in the other publications. They all believe in good journalism, something else this state and this nation desperately need.
Posted by Joseph B. Atkins at 1:41 PM