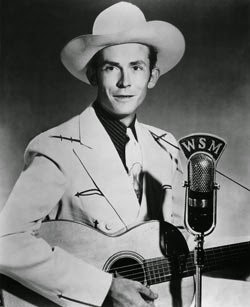 (To the right, Hank Williams)

During my recent travels through south-central Mississippi and Alabama en route to Selma for the 50th commemoration of the 1965 march, I encountered a lot of interesting folks—writer and sociologist Al Price (also known as “Chester Rebel”) and his group of activist Tennesseans who invited us to join them in Selma (see my postings on this event) plus Terry Faust at the Hank Williams Museum in Montgomery, Ala.

It has been a busy March with lots happening during and since that trip. Here’s a Labor South roundup of March encounters and events:

Hank would’ve wanted it this way

The South may be poor but it has always been rich with storytellers, and I met one of the best in Terry Faust at the Hank Williams Museum in downtown Montgomery, Ala. Terry is a musician and songwriter who helps out at the museum, and he’s also a special friend of the Williams family because of another job he holds: tending Hank Williams’ grave. 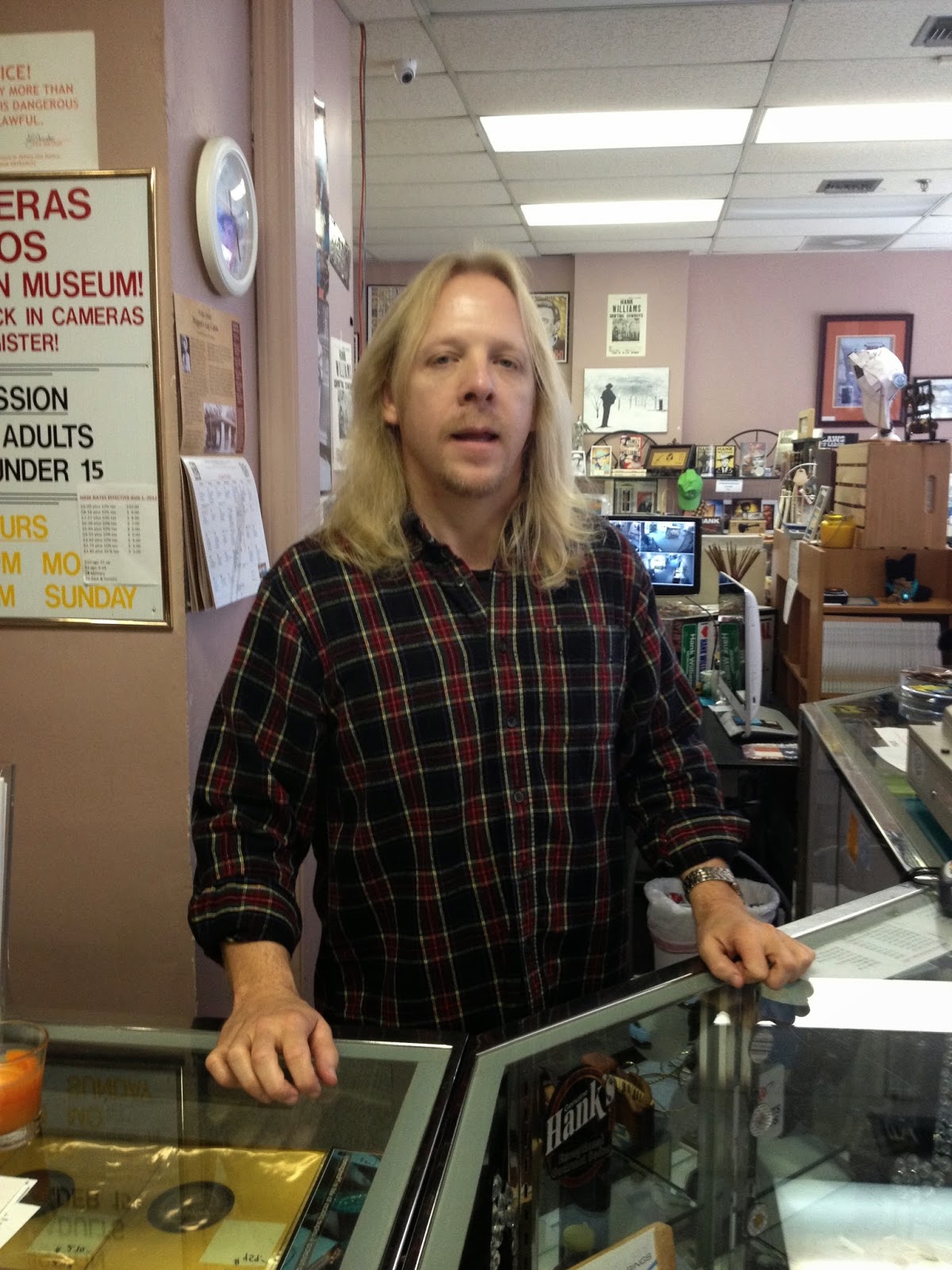 (Terry Faust at the Hank Williams Museum in Montgomery, Ala.)

I bought Terry’s CD of great, personally penned tunes, Terry Faust, the Grave Tender, along with several Hank CD’s at the museum store while Terry entertained me with one story after another about the Hank legend and his own encounters with country music greats like Jamey Johnson, also from Montgomery. He told of meeting the late Little Jimmie Dickens at the Grand Ole Opry. When Little Jimmie found out Terry tended Hank’s grave in Montgomery, he put his arm around him and told him what a good thing he was doing. Then he started reminiscing about the Hank he knew more than 60 years ago. “We talked about Hank Williams two solid hours,” Terry recalled.

Speaking of Southern storytellers, was anyone better than Hank Williams himself, a working-class hero if there ever was one? Whether he was “Ramblin’ Man” Hank or his alter-ego Luke the Drifter, the country music genius won me over the first time I heard “I’m So Lonesome I Could Cry” and “Long Gone Lonesome Blues” way back in the 1960s. In later years, I was drawn to his lesser-known tunes like “Weary Blues From Waitin’” and “Alone & Forsaken”.
At Terry’s suggestion, my wife Suzanne and I later went and ate lunch at Chris’ Hot Dogs, a nearly 100-year-old eatery in downtown where Hank himself used to hang out. It was wonderful, and I kept an eye on the back booth, where Terry said Hank liked to sit.

Claude Sitton, the greatest of the civil rights reporters, dies in Atlanta

I was saddened to hear of the death of Claude Sitton at 89 in Atlanta during my visit to Montgomery this month. Sitton was the greatest of the civil rights-era reporters, filing dispatch after dispatch to the New York Times from the front lines across the South. It is said that Sitton and Newsweek reporter Karl Fleming created the modern-day long, thin reporter’s notebook so they could hide it in their coat pockets.

Sitton possessed a “physical and mental toughness,” former Atlanta Journal-Constitution managing editor and author Hank Klibanoff told the Times. “He was not going to be intimidated.” Klibanoff and former Philadelphia Inquirer editor Gene Roberts authored The Race Beat, a Pulitzer Prize-winning account of the journalists who covered the Civil Rights Movement.

I got first-hand experience with that “physical and mental toughness” when Sitton interviewed me for a job at the old Raleigh Times in Raleigh, North Carolina, in the late 1970s. Sitton was chief editor of the morning paper, the News & Observer. Both papers were then owned by the Daniels family. I remember sweating under those intense eyes as Sitton probed me about my views on reporting and writing. I wasn’t sure how I handled his questions, but maybe I did all right. I got the job.

Striking oil workers in Louisiana, Texas, Kentucky, California and Washington scored a victory earlier this month with a tentative agreement on a contract between the United Steelworkers and Shell Oil Co., which served as representative for ExxonMobile, Chevron and other companies.

Nearly 4,000 workers began striking February 1, and they were later joined by another 3,000 at workplaces across the country to demand better working conditions, wages and benefits, and to protest the hiring of temporary workers.

Also joining the strike were environmental groups such as the Louisiana Bucket Brigade and the Sierra Club, whose members expressed strong concern about the environmental impact of oil refineries lacking proper safety standards.

According to Paul Garver of Talking Union, the USW believes the tentative contract promises better safety standards and a review of workplace practices and hiring as well as wage increases.

Tennessee legislator blasts Volkswagen for its openness to unions

Tennessee politicians just can’t get over the German company Volkswagen’s willingness to allow the United Auto Workers to address worker concerns with the company’s management at its Chattanooga facility. Although an election last year failed to give the UAW official collective bargaining rights at the plant, the company has okayed the union’s unofficial presence in discussions over workplace issues.

During a recent meeting of the state Senate Commerce Committee about, among other issues, a proposed $166 million incentives package to Volkswagen, state Sen. Bo Watson, R-Hixson, whose district includes the VW plant, fired a volley of criticism at Volkswagen America general counsel David Geanacopoulos for the company’s role “as a magnet for organized labor.”

Other Tennessee politicians such as Gov. Bill Haslam and U.S. Sen. Bob Corker, both Republicans like Watson, bitterly fought the UAW in last year’s election, warning of dire consequences if the union scored a victory.

Posted by Joseph B. Atkins at 5:37 PM No comments: 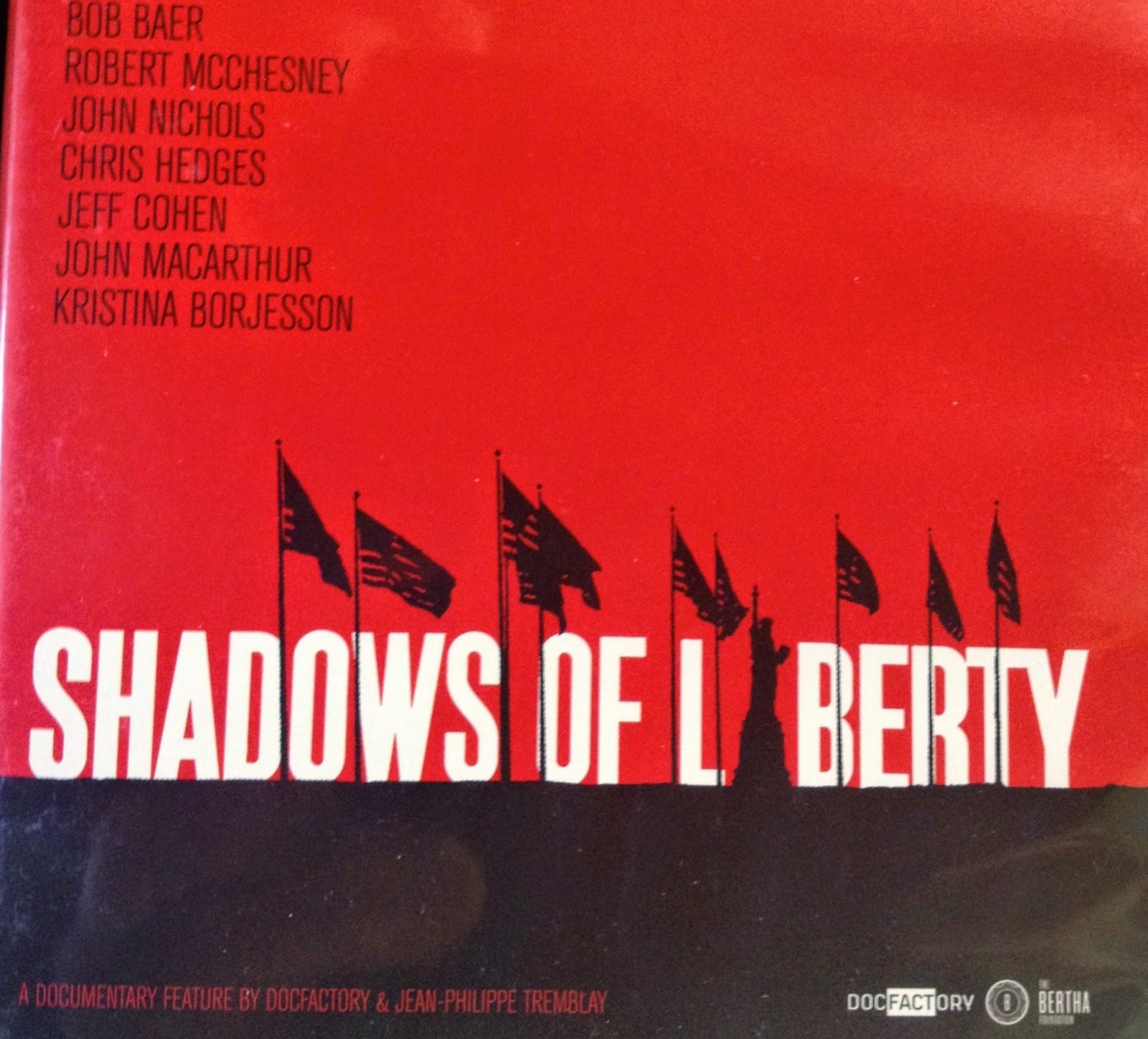 Filmmaker Jean-Philippe Tremblay knows the powerful forces aligned against democracy and a free press today, but he also knows that a revolution is underway to fight those forces.

“I think there is an uprising now,” says the maker of the amazing film documentary Shadows of Liberty, which details the dismal failure of mainstream media to live up to the legacy of Thomas Paine and other journalists who risked their lives to give people truth and freedom. “We have to react. This is a real time of change.”

A special screening of Shadows of Liberty was presented at Off-Square Books in Oxford, Miss., Saturday (Feb. 28) evening with yours truly, Joe Atkins, serving as moderator of a discussion with the audience after the screening.

The documentary features a series of stories showing how major mainstream media worked hand-in-glove with corporate America and the U.S. government to either kill or distort stories that threatened Wall Street or the military-industrial complex Dwight D. Eisenhower warned us about so many years ago.

Noted activists, journalists and authors like Julian Assange, Amy Goodman, Norman Solomon, Robert McChesney, Danny Glover, Daniel Ellsberg and Chris Hedges “give insider accounts of a broken media system,” according to a press release announcing the screening. The screening was sponsored by Square Books, the Unitarian Universalist Congregation of Oxford, and DocFactory.

“Controversial news reports are suppressed, people are censored for speaking out, and lives are shattered as the arena for public expression is turned into a private profit zone,” the release said.

Inspired by the writings of veteran journalist Ben Bagdikian on media consolidation, Tremblay assembles a compelling narrative that includes a much-needed retelling of the story of Gary Webb, the San Jose Mercury News reporter who scooped the national media with his “Dark Alliance” stories in the 1990s showing how the CIA was complicit with the Nicaraguan Contras in creating the crack epidemic in the United States.

Even though a subsequent government report validated Webb’s reportage, he was viciously attacked by the mainstream media, which essentially colluded with the government to try to deny the story and ridicule Webb. Webb ultimately committed suicide.

The documentary shows how Democrat Bill Clinton worked with Republican Newt Gingrich in securing passage of the 1996 Telecommunications Act that handed much of the nation’s media on a silver platter to mega-corporations to consolidate and ultimately devour.

The film issues a strong warning that the Internet with all its democratic promise faces a possible similar fate in the “Net Neutrality” debate.

A validation of Tremblay’s statement that “there is an uprising now” came just this past week as the Federal Communications Commission ruled in favor of net neutrality and put the lie to Republican opponents’ effort to brand the issue as “Obamacare for the Internet.”

The FCC ruling, which prevents major corporate providers from taking complete control of content and the cost of content on their networks, came after a strong endorsement of net neutrality by President Obama, itself a result of intense public pressure across the country against the corporate takeover. That pressure was the work of grassroots civic organizations that proved corporate lobbying doesn’t always win.

Tremblay’s documentary is in the grand tradition of the revolutionary journalism that Thomas Paine, Ida B. Wells, Lincoln Steffens, Ida Tarbell, Dorothy Day, George Seldes and I.F Stone practiced. Labor South puts itself in that tradition. In fact, Shadows of Liberty makes a nice companion to the landmark 1997 documentary Tell the Truth and Run by filmmaker Rick Goldsmith about Seldes’ amazing career as a journalist and press critic.

Students in my Media Ethics course at the University of Mississippi are going to see Shadows of Liberty. It’s news worth spreading.

Posted by Joseph B. Atkins at 7:52 AM No comments: