The Holy Family: Migrants in a hostile land

JACKSON, Miss. - Mariachi guitarist Johnny Mora’s bout with drugs was years in his past, but the legacy of jail time it led to is as much a companion as his guitar when he travels to perform in clubs and restaurants around Mississippi.

“I was afflicted, and by the grace of God I am here today,” Mora said at the recent “Crimmigration: The Tragic Consequences of U.S. Drug Policies on Families and Youth” conference in Jackson sponsored by the Mississippi Immigrants Rights Alliance and Southern Christian Leadership Conference. “It wasn’t because of the jail system.”

Mora was one of several speakers who talked of a painful past that included incarceration in what has become the world’s largest gulag: the U.S. prison system, which holds 25 percent of all prisoners around the globe. After losing his insurance business in California, Mora turned to music and moved to Mississippi to find work.

Kevin Elders is another Mississippian with a jail record because of a past drug conviction. “It was difficult for me to get a job,” said Elders, son of former U.S. Surgeon General Jocelyn Elders. “So many doors slammed in my face.”

An estimated 65 million people in this country have a criminal record, more than one out of every four adult Americans. One out of every three black males now in their early teens will spend time in jail, according to the Justice Department. For Latino males, it’s one of out of every five.

Not even Cuba, China or Russia put as many people behind bars as the United States.

Mora picked one of the worst states in the country for a man with a record to start a new life. Mississippi ranks second in the nation in incarceration—behind Louisiana, a state once described in the New York Times as “the world’s prison capital”—with more than 26,000 inmates behind bars or in custody at a cost of $339 million to taxpayers.

Fueling incarceration rates in Mississippi and around the country is the private prison industry—an “immorality” in the words of Father Jeremy Tobin, a Catholic priest who gave the invocation at the “Crimmigration” conference. Close to 50 percent of all immigrant inmates are in for-profit prisons or facilities. The nation’s two largest private detention companies—Corrections Corporation of America and The GEO Group—spent $25 million lobbying politicians and contributing to their campaigns over the past decade.

“They want to keep an indentured class,” Tobin said. “This country was built on slavery. They (immigrants) were asked to come and do the jobs nobody wanted to do, and they came and did it, and now we want to screw them. Think of all the African Americans out there who can’t vote (because of criminal records).”

For a state with as ugly a record on criminalization and racial prejudice as Mississippi, you’d think political leaders would think twice before turning to profiteering private companies with a vested interest in crime and punishment to handle what is morally a state responsibility.

Yet their failure is why the Mississippi prison system today is as bad as it was a century ago when racist demagogue Gov. James K. Vardaman got so frustrated he compared it to the Spanish Inquisition.

Here are a few examples:

- In May of this year, Mother Jones magazine listed the Walnut Grove Correctional Facility in Leake County, when run by the GEO Group, as one of “America’s 10 Worst Prisons,” a “cesspool” in the words of a federal judge where young children were subjected to sexual abuse and solitary confinement for long periods of time.

- In late July 2012, a riot broke out in the Hinds County Detention Center after an inmate protested his 11 months behind bars without an indictment on a marijuana possession charge.

- In May 2012, the undocumented migrant workers imprisoned in the privately run Adams County Correctional Facility got so sick and tired of conditions that they rioted, leaving one guard dead and 19 injured.

- Two years ago, the state Penitentiary at Parchman shut down its Unit 32, which housed death row inmates, as a result of lawsuits decrying conditions that allowed several killings and a suicide.

The first step Mississippi should take to rid itself of the “immorality” in its prison system is to get rid of private prisons. “If you’re getting paid per head, you want to keep ‘em coming in there,” Kevin Elders said about them.

The next step is to decriminalize minor drug offenses and migrant work.

Like usual, Father Jeremy was right. It’s a question of morals. Either you have them, or you don’t.

(This column recently appeared in the Jackson Free Press in Jackson, Miss.)
Posted by Joseph B. Atkins at 7:37 AM No comments: 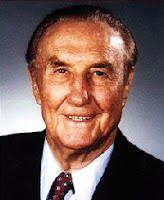 Way back in 1988, I sat across from Strom Thurmond in his Capitol Hill office in Washington, D.C., and listened as he explained his opposition to federal anti-lynching laws and any other federal encroachment on states’ rights during his long career.

“I felt it was dangerous to shift it all to Washington,” the then-85-year-old U.S. senator and former Dixiecrat presidential candidate from South Carolina told me.  “Lynching was nothing but murder. All states had laws against murder. … I’ve never had any feelings against minorities.”

Never mind that Thurmond, who died at 101 in 2003, led the Dixiecrat revolt out of the Democratic Party in 1948 and into the Republican Party in the 1960s largely as a reaction against civil rights legislation. Never mind that he was a segregationist superstar during much of the civil rights movement.

Thurmond’s disdain for the federal government that provided him a paycheck through much of his life was in classic Southern tradition. As far back as the 1830s, another South Carolinian, John C. Calhoun, led the so-called “nullification” effort to allow states to “nullify” federal laws on tariffs and other issues. It took a fellow Southerner, President Andrew Jackson, to put the lid on that campaign after sending troops down to Charleston.

The tradition is going strong today. Southern conservatives in Congress deserve much of the blame for the recent federal government shutdown that cost the economy $24 billion. In the U.S. House vote to re-open government, 73 Southern Republicans voted “No” and only 18 voted “Yes,” according to Zack Beauchamp in ThinkProgress. The much-talked-about Tea Party leading the charge against government speaks with a decidedly Southern accent.

Yet who have these Southern leaders represented through the years? Calhoun and his fellow nullifiers risked civil war in large part to defend planters worried that higher tariffs would cost them British customers for their cotton. Three decades later, hundreds of thousands of Southern farm boys went to war to defend the right of those same planters to own slaves.

When Thurmond and his vice-presidential candidate, Fielding Wright of Mississippi, led the Dixiecrat ticket in 1948, a major plank in their platform was opposition to organized labor. Like their predecessors, their hot-button issue may have been race, but they were also determined to protect the interests of the Southern business and political elite.

Today, the Tea Party rank and file rants against the federal government, but just try to take their Social Security and Medicare away from them. Thanks to the demonization of not only Uncle Sam but also labor unions by Fox News and its counterparts here in Mississippi and elsewhere, the progeny of those same Southern farm boys who fought for slavery think they now have to fight for the rights of business owners and corporate CEOs to enrich themselves at the expense of a docile and voiceless workforce.

A South African delegation led by Cedric Gina, president of the National Union of Metal Workers of South Africa, visited the Jackson, Miss., area recently and was shocked at the uphill fight Nissan workers in Canton, Miss., have to wage just to exercise their legal right to a union election. “We think this is not supposed to be happening in a so-called First World country, a so-called bastion of democracy,” Gina told me in a telephone interview. “To be so fearful, the workers, with no intervention. This is not supposed to be happening.”

Workers at the Nissan plant in Canton say they have been subjected to repeated meetings with managers who threaten a plant closure and lost jobs if they opt to join the United Auto Workers. Although well paid by Mississippi’s low standards, most of them have gone years without a pay raise and are subjected to arbitrary decisions by management on health and pension benefit changes, work hours, and working conditions.

Mississippi Gov. Phil Bryant has gone on record saying he supports outside groups that help keep unions out of his state.  He’s probably happy now that the Virginia-based National Right to Work Legal Defense Foundation has issued a special notice to Nissan workers in Canton warning them of the horrors of joining together and speaking with a united voice.

After a majority of workers at the Volkswagen plant in Chattanooga, Tenn., indicated their support for a company-and-union-backed, German-style works council at the plant, the same foundation filed charges with the National Labor Relations Board alleging UAW coercion. The UAW says the claims are ridiculous.

A thread that runs through Southern history even stronger than race is class. The ruling class in the South doesn’t tolerate challenges to its rule well—whether that challenge comes from united black people or from united working people.

(This column ran earlier in the Jackson Free Press in Jackson, Miss.)

Posted by Joseph B. Atkins at 6:58 AM No comments:

A "Crimmigration" conference, Walmart on the dole in Mississippi, and Kellogg locks out Memphis workers

It has been a busy week for yours truly. Ed “Flash” Ferenc of WERE-AM 1490 in Cleveland, Ohio, interviewed me Wednesday, Sept. 25, about the United Auto Workers campaign at the Nissan plant in Canton, Miss. WERE-AM is “The People’s Station”, a radio station devoted to talking about labor issues and telling the stories of working class people, and it’s living proof that corporate media haven’t quite yet shut down the discussion on those stories or on labor issues in general.

On Ferenc’s “America’s Work Force” show, we discussed the labor movement in the South, its obstacles, how the image of the union-hostile, low-wage, low-benefits, environmentally lax South lamentably has become a model for the rest of the nation. The UAW’s success at the Volkswagen plant in Chattanooga, Tenn., also came up. The union says it has enough signed cards from workers for a German-style works council to be set up at the plant. Check out the show at: http://awfradio.com/todays-show-9-25-13/

The UAW’s turn to the South is also the subject of a lengthy piece I just completed for upcoming edition of the New Labor Forum in New York. The NLF is arguably the finest journal devoted to labor issues in the country today, and I was proud to write for them.

The South indeed is again a battleground, and the outcome will affect the entire nation. Workers need a united voice. That’s the only way to counter the Republican-backed corporate juggernaut. I shouldn’t let Democrats off the hook here. A lot of them spend too much time acting like Republicans. Working people have to look past party lines to see who their real friends are.

Teachers are protesting in North Carolina. They ought to protest. They’re the lowest-paid teachers in the nation, according to one recent report. Fast food workers have had it with sub-minimum wages and disrespect at the workplace. Auto workers get better pay than most folks in the South wearing a blue collar these days, but they know it isn’t only about the pay. It’s about respect. The United Auto Workers and other unions realize that, and it’s why their message is getting heard in Dixie. Let it ring loud and clear!
Posted by Joseph B. Atkins at 2:10 PM No comments: 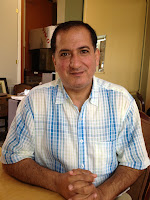