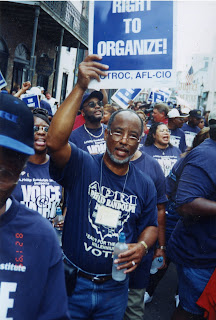 With this "Labor South" blog I plan to put a spotlight on some of the labor activity in the U.S. South you don't read about elsewhere, always keeping it in context with what is going on nationally and internationally as well. This blog will also provide an historical and cultural (including music, literature, and art) perspective that takes into account the long, hard, and often bloody struggle workers have always had to wage whenever they tried to organize in this region.

What are my credentials for doing this? I am a veteran journalist who has written about working class people since I began my career in the mid-1970s. I worked for newspapers in North Carolina and Mississippi and I covered Congress and the South as a reporter before coming to the University of Mississippi to teach (and still practice) journalism. I am a textile worker's son who grew up in North Carolina and worked in tobacco fields and textile plants as a young man. My German mother made sure I always saw things in a broader context than my immediate surroundings, and in both of the two books I've published I try to show how the story of the South is part of a larger story vitally connected to, not separate from, the world.

My most recent book, "Covering for the Bosses: Labor and the Southern Press" (University Press of Mississippi, July 2008), looks at the labor movement in the South both today and yesterday and assesses the powerful alliance of business, political, and media interests that have kept the South the nation's least unionized region. I traveled from the Carolinas to Louisiana to gather information for chapters that probe the Charleston, S.C., longshoremen's strike in 2000, the collapse of the textile industry, Wal-Mart, Latino immigration, "Detroit South", the Sunbelt South, and labor's role in the civil rights movement. The book, which includes a foreword by noted author and activist Stanley Aronowitz, also looks back to the sharecroppers' and textile workers' strikes in the 1930s and to the region's unsung labor heroes. I continue this work in the columns and articles I write (often with the byline Joe Atkins) for Mississippi's largest newspapers and other publications.

Legendary labor leader Sidney Hillman once called the Southern labor movement a "venture into unplowed fields." Yet the nation's labor movement will never reach its true potential without a harvest of those fertile fields.

A lot is happening down here that never has and never will get covered in the nation's mainstream media. It's a void too big for this little blog, but maybe this is a start.
Posted by Joseph B. Atkins at 5:01 PM No comments:

Labor unions in this country are developing the global strategies they're going to need to fight for worker rights in a global economy. That became clear to me during one of the best panels I attended at the recent "Class Matters" conference of the Working Class Studies Association in Pittsburgh.

Let's look at the fight against North Carolina General Statute 95-98, a relic of the old segregationist, anti-union 1950s that saw late rabid right-winger and later U.S. Senator Jesse Helms first step onto the public stage, A right-to-work state with traditionally the lowest rate of unionization in the country--and my native state, by the way--North Carolina with this law effectively denied state and local government workers the right to collective bargaining that Franklin Roosevelt guaranteed other workers during the Great Depression. Virginia is the only other state with such a law.

Workers in North Carolina, particularly black and other minority workers,have protested this statute for years. Among the groups waging war against it is the United Electrical, Radio and Machine Workers of America, better known as UE, a legendary "rank-and-file" union that has been fighting for working people since the 1930s.

During the panel titled "Labor Strategies in a Globalized Economy" at the Pittsburgh conference, Robin Alexander of the UE told how her union and other activist groups are using international law to discredit NC General Statute 95-98. "The state is acting illegally," she said. The UE joined with unions in Mexico, Quebec, and Japan to show some international solidarity with sanitation workers and groups in North Carolina like the Black Workers For Justice in the fight against the statute. The fact that these international unions come from countries that trade with North Carolina has been an important factor in getting state pols' attention. Formal complaints have been filed with the governor, and legislation has been proposed for repeal of the statute. "We have built an amazing coalition," Alexander said.

Here's wishing them success. As you may recall, UE Local 1110 won a big victory last December after a six-day, 1930s-style sit-in and occupation of the Republic Windows and Doors factory in Chicago. An agreement by Republic, its lenders, and the union promised eight weeks' pay, vacation pay, and extended health care benefits to workers who had protested a sudden shutdown of the plant with only three days' notice.

By the way, if you'd like to know more about UE's interesting history, check out "Them and Us: Struggles of a Rank-and-File Union" by early UE leader James J. Matles and writer James Higgins. Loving the title, I picked up the book at the Townsend Booksellers book store in Pittsburgh. It's a great account of UE's role in the nascent CIO and its battle with the staid old leaders of the AFL as well as with corporate bosses.
Posted by Joseph B. Atkins at 12:39 PM No comments:

Labor South is on the rise!

This is my first entry on my new blog "Labor South", and I'm looking forward to making it a part of the labor media scene down here, and to reading your input.
Posted by Joseph B. Atkins at 2:36 PM 3 comments: