No Evil Foods in Asheville, North Carolina, may make good El Zapatista but Emiliano would be very unhappy with the way it treats its workers 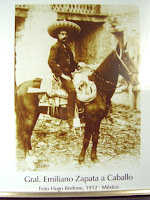 (Emiliano Zapata would not be happy with No Evil Foods)

No Evil Foods on the outskirts of Asheville, North Carolina, takes pride in being a very cool and hip company.  On its web site, it proclaims the following: “No Evil Foods makes meat from nothin’ but plants. We are makers driven to help hungry mouths everywhere recognize the connection between food, kindness to self and others, and environmental impact.”

This is a company with a leftist schtick. Among its vegan meat products are Comrade Cluck and the chorizo-like El Zapatista. Its owners like to call themselves “revolutionary leaders”.

Well, comrades, Emiliano would not be very happy with No Evil Foods if he were around today. With the coronavirus/COVID-19 pandemic threatening its dozens of employees much like it’s threatening all of us, No Evil Foods has insisted that, as a food operation, it is an essential service to its paying customers, and its workers must continue producing. This came despite a “Shelter in Place” order from the city of Asheville. When workers complained about safety conditions, they got an ultimatum.

“We could continue working for No Evil Foods and get a `temporary’ $1.50 raise after 90 days of perfect attendance, we could quit with the option to possibly return at a later date, or we could quit with a severance package of 3-weeks pay (after signing a gag order) with no option to ever return,” a worker at the company wrote Labor South in a lengthy, detailed letter recently. Labor South has decided to protect the worker’s anonymity.

A group of workers at the company issued a statement that was published in local media. “No Evil Foods has publicly created an image of being an ally to socialists, leftists, and workers around the country,” the statement said. With the outbreak of the virus, “we were told to wash our hands more. We were reassured that common areas would be sanitized more frequently. But as the number of infections continued rising, so did our concerns. With +60 of us working together between two shifts in a confined production area, we knew that proper handwashing and increased sanitizing of surfaces wouldn’t be enough.”

This is the same company that fought tooth and nail against a unionization effort by its employees back in February. It hired one of those union-busting law & consultant firms that companies and corporations pay big bucks to procure in the South, Constangy, Brooks, Smith and Prophete, a firm that sends its 200 lawyers across the South and beyond at an estimated cost of $2,500 per day to destroy union drives. Required employee meetings decrying the union, fear-mongering posters, and the usual litany of threats and other propaganda succeeded in defeating the union by a vote of 43 no’s to 15 yes’s.

On its Facebook page, No Evil Foods insists that “the safety of our team members, our customers, and our products is our #1 priority, and we take very seriously our shared responsibility to the country to maintain the food supply in this time of uncertainty. Our team is working hard to make sure everyone continues to have access to healthy, plant-based foods. Here’s what that means for how we do business: Starting March 16th, all employees who can perform their work from home are doing so. To ensure the safety of employees whose jobs require they be on site, we’ve amped up our already rigorous sanitation practices and capped production rooms to 10 individuals to maintain appropriate social distance, whenever possible.”

Still, as worker protests grew against how managers at No  Evil Foods “do business”, and media attention grew along with it, the company decided last week to offer its workforce “hazard pay”, a $2.25 raise. The action came just as workers were organizing a petition to demand hazard pay instead of the company’s earlier offer of a $1.50 raise with 90 days perfect attendance. “Word got back to management that this petition had a majority of signatures on it and was about to be turned in, so management jumped ahead of the game and ‘randomly’ decided that we should have hazard pay,” said the No Evil Foods worker in a second letter to Labor South.

Labor South telephoned No Evil Foods for comments on this story, and a return call was promised but never received.

Workers, however, consider the hazard pay offer a victory. “It was a pretty big win for all of us and it showed that if we have solidarity and a collective voice, we can get the things we want. We’re all thinking our next move might be to pass around another petition and try to make that pay increase permanent!”

Now, that’s something that would make old Emiliano happy.