A U.S. Army veteran of both the Vietnam and Afghanistan wars is feeling a strong sense of deja vu these days 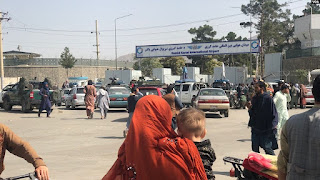 (Civilians and Taliban fighters at the Kabul airport)

My old Army buddy Bob Mayton of Albemarle, North Carolina, is getting a strong sense of déjà vu these days. Every time he turns on the television and sees the thousands of desperate Afghans at the Kabul airport struggling to get out of their country, he remembers what happened in Saigon 46 years ago.

Just as Afghans risk their lives clinging to U.S. airplanes as they lift off, Vietnamese who’d worked with the U.S. military did the same as U.S. helicopters flew out of Saigon for the last time in April 1975.

“We have learned from history that we don’t learn from history,” Bob told me during a recent phone call. “Americans particularly.” 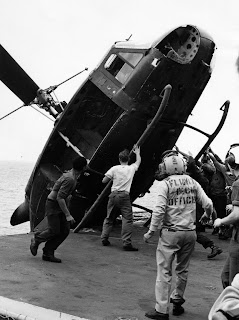 (To the right, junking a South Vietnamese helicopter in the scramble to leave Vietnam in April 1975)

Bob, a teacher and historian, has the unique perspective of someone who served as a soldier both in Vietnam and

Afghanistan, two long and losing wars that bookended a career that began in March 1971 and ended in December 2010. His service included both active duty and also years in the National Guard and Army Reserves and as both noncommissioned officer and officer.

He was in Afghanistan from June 2009 to May 2010, training Afghan infantry soldiers in logistics nd infantry tactics for the National Military Academy Afghanistan. He served in Vietnam from August 1971 to March 1973. He and I were in the same Army outfit in Plantation, Vietnam, in 1971 and part of 1972. 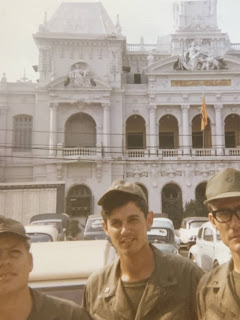 (Bob Mayton, this writer, and our Army buddy Preston Parker in Saigon circa 1971)

“When I left (Afghanistan) in 2010 I thought we were going down the tubes. I am amazed it lasted as long as it did. I saw the Afghan military wasn’t very motivated. It really wasn’t the military’s fault. … They knew about the corruption. They knew what was going on. They were involved in it, too.”

Over the 20 years of the U.S. involvement in Afghanistan, the U.S. government spent billions of taxpayer dollars on equipment, training, and the waging of a futile war, The equipment will now benefit the Taliban as it takes over the reins of government. War profiteers in the United States grew fat and happy as they do in all wars, and that’s why the “Deep State” they occupy is now so angry at President Joe Biden for finally bringing an end to those once-swollen rivers of cash flow.

“That is the ugly, ugly truth about the whole thing,” Bob said. “The military-industrial complex ran amuck. … The U.S. gave Afghans $50 million for spare parts, and we tried to teach them to requisition equipment. They get the $50 million to order spare parts and they wouldn’t do it. That money went somewhere. Into the pockets of officials. Some of that went on in Vietnam.”

As in Afghanistan, the years of U.S. investment in training South Vietnamese soldiers went to naught once the U.S. pulled out and the Communist North Vietnamese swept into Saigon.

However, Afghanistan is a much different country. In fact, it’s hardly a country at all.

“There are nine major tribes or ethnic groups in Afghanistan. It is not really a nation. It is a collection of tribes. Each tribe wants to do it their way. I don’t think the people as a whole are interested in a united Afghanistan.

“I was teaching infantry tactics, advanced individual training. The people came and went as they pleased. Guys would come in and find out they were going to Kandahar and go home, sell their uniforms and equipment. They’d wait a month or so and come back and go through it again. They didn’t want to go to Kandahar. That was where the Taliban was, and troops were getting with the program.

“The Afghan people I met on the surface were nice people, and they appreciated what we were doing, but their heart wasn’t in it (the war).”

Bob feels the U.S. withdrawal could have been handled better, but “I think there is probably some truth in what Biden said about not tipping off the Taliban with an earlier withdrawal. I like Biden, but I think it could have been better planned.”

Bob worries about the Afghans left behind and particularly Afghan women, who now face the religious zealotry of the Taliban. “I worry that the schools for women are going to be gone.” 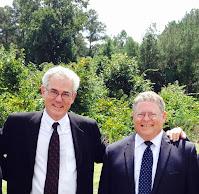 (This writer and Bob Mayton in North Carolina in 2014)

What’s also worrisome is the fact that this could all happen again.

“I’d like to say no but hell no, but I think it will happen again.”

And when it does, perhaps some young soldier who served alongside Bob in Afghanistan will serve in that future war as well, and he, too, will be experiencing the same sense of déjà vu that Bob is feeling today.

Four-time Louisiana Governor Edwin Edwards, RIP, silver-tongued and flamboyant but a true populist in the progressive tradition of that word 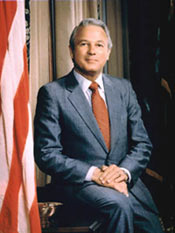 On the night of October 24, 1987, I wrapped up a 17-hour day covering the Louisiana governor’s race in New Orleans and finally left the Hyatt-Regency Hotel campaign headquarters where half-hearted Republican candidate Bob Livingston seemed so happy to have lost that he pulled out a harmonica and rock ‘n’ rolled on the stage with an Elvis impersonator. You’d have never known from the jubilation in the crowd that Livingston had lost.

As soon as I returned to my more modest hotel, I remembered something fellow team reporter John Hill had told me. Be sure to catch Edwin Edwards’ concession speech, he said. I turned on the television.

Indeed, the silver-tongued populist Democrat was on the screen and about to concede his first-ever political loss, this time to conservative Democrat-and-future Republican Buddy Roemer. Edwards walked solemnly to the stage that had been prepared at the Hotel Monteleone on the edge of New Orleans’ French Quarter.

Admitting that he had lost the race, Edwards vowed his continued commitment to the people of Louisiana. “Tears come to my eyes at night for the poor people and the elderly,” Edwards said, a finger—as I recall—touching his cheek. “No one will ever know.”

Ah, populism—the real kind! You’ve got to love it! Edwards, who’d go on to serve a fourth term as governor after defeating former Ku Klux Klan leader David Duke in what was called the “Race from Hell” in 1991, died last month at the age of 93 after a long career in the public eye that included an eight-year stint in prison for influence peddling in connection with casino licenses. An irony is that Edwards never smoked or drank, but he loved to gamble.

“All this fun has to end at some point,” he reportedly said as his life ebbed away.

Edwards was a blast for this old political reporter to cover back in the 1980s and 1990s. I remember a Democratic Party political event on the Mississippi Gulf Coast in 1992 in which Edwards and former Mississippi governors Bill Allain and William Winter were the featured speakers. All three gave great speeches, but Edwards had the crowd laughing with a risqué joke about a rogue Catholic priest.

Turning to a priest who shared the stage with him, Edwards said, “Sorry, Father. That was another parish.” Edward grew up near Marksville, Louisiana, the son of a sharecropper-turned-merchant who was an anti-Catholic Protestant and a French Cajun mother who was Catholic. He and his brother Marion attended Nazarene services.

As Edwards spoke, I noticed two beautiful and buxom young women sitting at a table near the stage with a couple of muscle-bound guys who looked like Mafia hit men. I turned to a fellow correspondent from Louisiana at my table and asked about the blondes and the hit men. “They (the women) are for Edward after the speech tonight.”

Edwards was a bit of a rascal, three times married, the last time to 32-year-old Trina Grimes when he was a ripe old 83 and newly freed from prison. Of course, his most famous quote may be something he said in 1983, asserting that the only way he could lose an election would be to be caught in bed "with a dead girl or a live boy."

Investigated and indicted in the past but never successfully prosecuted until that last time, he cut a swashbuckling path through always colorful Louisiana politics, pushing the same kind of progressive agenda that predecessors Huey Long and his brother Earl had done before. 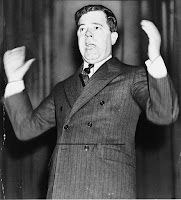 Back in the 1920s and 1930s Huey took on the oil and timber barons who ruled Louisiana and cut them down to size, claiming nearly dictatorial powers at times, it’s true, but along the way finally giving the state’s poor and working class a piece of the pie in oil-rich Louisiana. An assassin ended Huey’s life and rule in 1935, but Earl picked up the baton. He pushed for higher old age pensions and free school lunches, and like Huey resisted the racist ranting that other Southern pols like Theodore Bilbo and James K. Vardaman in neighboring Mississippi used to solidify their poor white support. 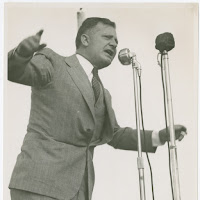 (To the left, Earl Long)

Edwards broke records in the number of African Americans he appointed to office and went after the oil industry that had grown rich in Louisiana. By linking oil taxes to the price of oil (and not volume), he boosted state coffers—at least during times when the industry was booming. In the mid-1980s, he helped retire his campaign debt by organizing a laissez les bons temps rouler trip to Paris, France, for his buddies and supporters. The price for a ride was $10,000 a person.

Edwards was no angel, but he brought some delicious spice to politics, and he represented a true populism, one that is progressive, not the right-wing kind that Donald Trump has come to symbolize. Trump-style “populists” are nothing more than old school Bourbons in disguise, serving the same wealthy interests that the old Southern gentry always served and that Republicans still do.

Posted by Joseph B. Atkins at 3:18 PM No comments: