Why are so many black politicians and civil rights leaders silent about the union vote at Amazon's Bessemer, Alabama, warehouse, where a majority of the workers are black?

(As a Feb. 22 addendum to this piece black Georgia Democrat Stacey Abrams, who made a strong bid for governor in 2018, posted on Saturday, Feb. 20, the same day the editorial below appeared, a strong endorsement of unionization at Amazon's Bessemer, Alabama, warehouse. That's a welcome show of support that the workers need. It'd be nice to hear from Vice President Kamala Harris, too, wouldn't it?)

Why is there a deafening silence among many black politicians and civil rights leaders regarding the historic union vote taking place at Amazon’s Bessemer, Alabama, warehouse?

On Feb. 8, the 5,805 workers at Amazon’s Bessemer, Alabama, warehouse began receiving ballots on whether to vote in the Retail, Wholesale and Department Store Union (RWDSU). Most of them are black in a 70 percent black city.  Ballots must be filed by the end of March.

Bernie Sanders, the senator from Vermont and erstwhile presidential candidate, and a group of U.S. House members led by House Education & Labor Committee member Andy Levin have been vocal in their support of the workers, who’ve been on the front lines risking their own health during the pandemic while frantically getting merchandise to customers who can no longer shop without fear of the COVID 19 virus.

Long-brewing issues with their working conditions and warehouse safety at the bustling plant have fueled a union drive that has deeply frightened anti-union Amazon even in a right-to-work, Deep South conservative state. The massive company has waged a bitter war against the effort that has even included an online campaign to determine who might be pushing for the union.

Levin got 50 members of the U.S. House to sign a letter to Amazon CEO Jeff Bezos expressing support for the union drive and asking the company to desist in its anti-union campaigning. Missing from that list of members are prominent Democratic black congressmen such as Bennie Thompson of Mississippi and James Clyburn of South Carolina, the self-styled kingmaker who helped Joe Biden make a sweep of the South in the Democratic presidential primaries.

Also little or nothing has been heard from the NAACP and the Black Congressional Caucus about the Bessemer vote.

Could the reason be Amazon money? The company boasted last July that it was matching the $8.5 million that its employees across 33 companies had donated to programs and organizations aimed at fighting racism. With an earlier donation of $10 million, the company said its contribution would total $27 million.

During the United Auto Workers’ drive to organize workers at Nissan’s giant plant in Canton, Mississippi, some years back, the company funneled plenty of cash into the NAACP, which partnered with Nissan for the 50th anniversary of the March on Washington in 2013. That same year Nissan gave $100,000 to the Medgar and Myrlie Evers Institute to commemorate the life of martyred Mississippi NAACP leader Medgar Evers. Although Hollywood actor and strong UAW supporter Danny Glover had been a featured speaker at past annual Medgar Evers dinners, he was significantly not invited at the 2013 event.

The NAACP’s Murfreesboro, Tennessee, branch was so thankful for Nissan’s monetary help in 2016 that it named the company’s North American operations “Organization of the Year”.

Yet Nissan, like Amazon, waged a fierce campaign against the organizing effort at its Canton plant, yet again an operation with a majority black workforce.

Posted by Joseph B. Atkins at 2:03 PM No comments:

(To the right, Anne Feeney) 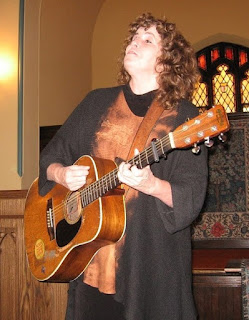 The American Labor Movement lost one of its greatest troubadours this week to Covid, Anne Feeney, the Pittsburgh songbird, activist, protester, and granddaughter of a violin-playing, labor organizing mineworker.  A trained lawyer as well as musician, she once lamented how workers in this country have lost a sense of labor tradition.

“So many lessons that we have learned—both bitter and glorious—are remembered in labor songs,” she wrote in a May 2008 column in The Guild Reporter. “One of the reasons we don’t know our history is because we don’t know our songs.”

Knowing history is to know that movements rise from the bottom up, not the top down. “Professionals, politicians and philanthropists are helpless to effect social change without mass movements behind them. … France has a fantastic labor movement even though its union density is lower than ours. But French workers have something that we do not have—class consciousness. This is something that has been drilled out of us by corporate America.”

A lot of labor buzz has been created by Democrat Joe Biden’s rise to the presidency. Calling himself “the most pro-union president you’ve ever seen,” Biden has promised that “unions are going to have increased power.”

As Anne Feeney told us, however, real power is going to depend on grassroots organization and mobilization. Here in the South, where workers have always faced what I call the “phalanx” of opposition by big business, politicians, religious leaders, and corporate media, such grassroots efforts have been paying off, paying off in a region with a proud-but-tortured-and-largely hidden labor history and one with its own strong musical tradition as well.

On Feb. 8, the 5,805 workers at Amazon’s Bessemer, Alabama, warehouse will begin receiving ballots on whether to vote in the Retail, Wholesale and Department Store Union (RWDSU). Although Amazon’s facilities in places like Germany and elsewhere in Europe are fully organized, the company is fighting like hell to make sure its Bessemer warehouse stays non-union. A pro-union vote in the Deep South, of all places, might inspire workers at other U.S. Amazon sites to go union. It’s enough to make billionaire Jeff Bezos have nightmares even if he’s relinquishing some of the reins of his power.

Organizers at Bessemer are “cautiously optimistic,” as people like to say when they want to remain clear-eyed even as they see rays of hope. Workers get paid comparatively well at the plant, but many feel the company needs to do more to protect them during the pandemic and that management makes too many arbitrary decisions about shifts and working hours without notice to employees.

Farm workers in the South these days tend to come from Mexico or farther south, and that makes them the most vulnerable of workers. Federal programs like the H-2A visa program put them under the control of employers who too easily and without consequence break promises on wages as well as living and working conditions. In recent years, however, organizations such as the Farm Labor Organizing Committee, Coalition of Immokalee Workers, and Southern Migrant Legal Services have used class-action lawsuits and pressure tactics on the long-insulated corporations that contract with growers and buy the products the workers produce to achieve significant gains for those workers—better wages and a better system to voice and resolve complaints.

As reported earlier in Labor South, nurses at Mission Hospital in Asheville, North Carolina, overwhelmingly won their union drive last September, a historic milestone for the allegedly anti-union South. Over the past 10 years, union membership here in Mississippi grew 2.6 percent, according to the Institute for Southern Studies' Facing South. Neighboring Louisiana saw a 1.6 percent increase. The Carolinas saw increases from 2019 to 2020.

(Ella May Wiggins, martyred labor troubadour and activist during the textile mill strikes in North Carolina in the 1920s)

What if these workers knew more about Southern labor heroes like Ella May Wiggins, Mother Jones, Lucy Randolph Mason, Howard Kester, Scipio Jones, H.L. Mitchell, or songsters like John L. Handcox, Hazel Dickens, Florence Reece, and Zachary Richard? They’re not taught in the classroom or played on the radio, but watch out once their words and their music are heard.  There’s a newly arrived songbird in heaven who knows what would happen.

Posted by Joseph B. Atkins at 3:48 PM No comments: