Pete Seeger knew the answer to the question: "Which Side Are You On?" 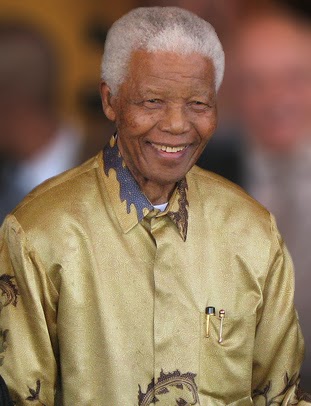 (Here's one more look at the late Nelson Mandela and the Southern senator who dismissed him as a communist. This was published recently in the Jackson Free Press in Jackson, Miss.)

When Nelson Mandela spoke to the U.S. Congress on June 26, 1990, the godfather of modern-day Republican obstructionism, the late U.S. Sen. Jesse Helms of North Carolina, wasn’t in the chamber.

I was there as a reporter, but “Senator No” was protesting. “Before we get his halo in place too securely, let’s examine this guy,” Helms groused.

Of course, Helms had made up his mind about the man who led the fight for freedom against apartheid rule in South Africa. Helms called Mandela a “communist,” much like he called Martin Luther King Jr. a communist, and he opposed sanctions against South Africa like he opposed civil rights legislation and a holiday named after King.

Helms missed a good speech. It came just four months after Mandela’s release from 27 years in prison. Mandela died last month at the age of 95.

Echoing King’s speech in the 1963 March on Washington, Mandela said South Africa “has known nothing but racism for three centuries,” but it could become “an oasis of good race relations, where the black shall to the white be sister and brother, a fellow South African, an equal human being.”

Mandela even invoked King in his speech, citing him along with George Washington, Abraham Lincoln, John Brown, Sojourner Truth, Frederick Douglass and others as having inspired South African freedom fighters in their “struggle to guarantee the people life, liberty and the pursuit of happiness.” 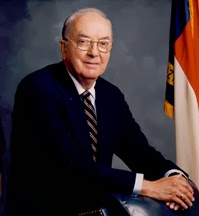 (To the right, Jesse Helms)

If Ol’ Jesse were alive today, what would he say about his philosophical successor, Tea Party hero and Republican U.S. Sen. Ted Cruz of Texas? “Nelson Mandela will live in history as an inspiration for defenders of liberty around the globe,” Cruz posted on his Facebook page Dec. 4. “Because of his epic fight against injustice, an entire nation is now free.”

Cruz has since caught hell from supporters even farther to the right than he is. Still, Cruz is no hero. Had he been a senator back in Helms’ day, he would have fought side-by-side with the owlish North Carolinian, raising Cain about commies in both the U.S. South and South Africa. It’s easy to praise someone after he’s safely entombed in the grave.

The world rightly mourns the death of a great leader in Mandela. Again much like King, he took his stand at a time when non-racist rule in his homeland seemed impossible. King spent time behind bars, and so did Mandela, nearly three decades of it. He even refused a pardon in 1985 when the condition for it was a renunciation of violence in the cause for freedom.

Like King, Mandela once believed nonviolence was the way to end racism, but the South African government’s own brutality convinced him the ANC had to arm itself and wage combat if it was to succeed. In the end, however, it was Mandela’s genius at negotiation and vision of a nonracial future, not violence, that won the day. He proved Mao Zedong was wrong when the old revolutionary insisted that “in order to get rid of the gun it is necessary to take up the gun.”

The struggle, of course, goes on, both in South Africa and here at home. Mandela helped end apartheid, but deep poverty continues. One out of every four South Africans is jobless. Racism in the U.S. South is no longer officially sanctioned, but blacks continue to be the poorest in what is still the nation’s poorest region.

At the height of the civil rights movement in the 1960s, public protests by churches and groups like the Student Nonviolent Coordinating Committee, Students for a Democratic Society and the Congress of Racial Equality forced Chase Manhattan and other major banks to withdraw some $40 million in financial support for South Africa’s white government.

Yet major banks today continue to be on the wrong side in social justice issues. The Farm Labor Organizing Committee’s divestment campaign against JP Morgan Chase for its support of Reynolds American finally forced the tobacco company in 2012 to agree to meet with FLOC regarding serious health and other issues among migrant workers in the tobacco fields.

Back in 1990, Mandela told Congress that he hoped the poor would never point a finger of accusation “at all of us because we failed to respond to the cries of the people for food, for shelter, for the dignity of the individual.” Mandela heard their cries. Who does today?

Posted by Joseph B. Atkins at 2:55 PM No comments:

Fighting the "Spirits of Darkness" in 2014: Insight from a 16th century magician