Looking to Charles Dickens' "A Christmas Carol" for hope in 2021

(Charles Dickens at his desk) 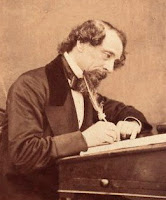 This is a rerun of my Christmas 2017 post, a column that looked to Charles Dickens to give us some hope for better things to come. What it says pretty much still rings true today, but let's take hope from Dickens' tale that 2020 will have opened some eyes and hearts, and indeed better things will come in 2021.

OXFORD, Miss. – I settled comfortably into my favorite chair one recent night and popped in a DVD of the best Christmas movie ever, the 1951 version of Charles Dickens’ A Christmas Carol.

Probably much like Mississippi’s Republican leadership. With their gutting of the state’s Workers’ Compensation protections back in 2012, then-Mississippi Gov. Phil Bryant and his fellow Scrooges in the state Legislature made sure workers here are the nation’s least compensated for work-related injuries and thus the least protected. They are among the country’s most at-risk workers. A Mississippi worker is twice as likely to be killed on the job as the typical U.S. worker.