Labor South Roundup: Loss of good friend and writer/teacher Jere Hoar; plus a look at how the state of Mississippi enriches its famous friends with federal welfare dollars

Labor South Roundup: Loss of a good friend and fine writer/teacher; plus a look at how Mississippi spends federal welfare money. 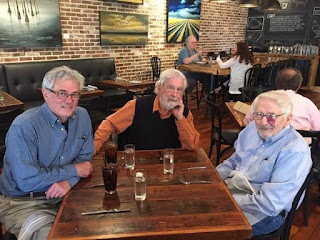 (Yours truly to the left, famed journalist Curtis Wilkie in the center, and Jere Hoar to the right)

I lost my good friend Jere Hoar recently, a legendary professor here at the University of Mississippi, a fine writer whose 2002 novel The Hit should be a hardboiled noir classic, and wonderful raconteur.

He was 91, a long life, and he was one of the last here in Oxford, Mississippi, who personally knew the novelist William Faulkner and his family. To go to Jere’s rambling farm home just off what is now called “Faulkner Highway” was a trip to that fabled past with his horses, his dogs, his hunting grounds, and his stacks of books and magazines everywhere, and his arsenal of guns! The walls of his living room were filled with original paintings of prized horses and bulls and dogs, signs of a love of the outdoors that endeared him to good friends like the noted writer Jim Harrison.

"I think I was happiest in the classroom teaching, in meadows and tamed woods hunting quail, and taking care (with my herding dog) of our flock of sheep," Jere once wrote in a Christmas card to my wife Suzanne and me. He taught journalism at the University of Mississippi for many years. On the card was a flock of sheep in the snow.

Here in the photos you see him with me and his Nawlins-born-and-bred scientist/writer buddy Ron Borne on an Oxford street, and another with the legendary journalist Curtis Wilkie, who lives in Oxford, for a joint writers outing at a restaurant in the tiny town of Taylor near Oxford. 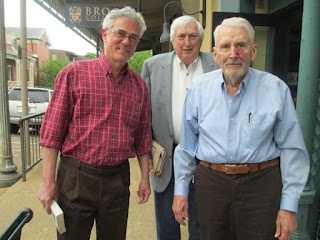 (To the right, yours truly, Ron Borne, and Jere Hoar on an Oxford, Mississippi, street)

Our good buddy and New York Times bestselling novelist Ace Atkins should be here among these photos but I couldn’t find one. The three of us were too busy in our regular gatherings at Jere’s house talking books, movies, and writing over glasses of Jack Daniels and plates of fried chicken to take photos!

Jere wrote an unforgettable blurb for my 2015 novel Casey’s Last Chance that might have served one of his own books well, whether The Hit or his 1997 collection of short stories Body Parts. “The sense of place … is palpable. The author knows the long dark stretches of blacktop between dim lights on Mississippi secondary roads, the dangerous sections abruptly encountered in our few cities, the little towns with photographs in filling station windows of mere boys and handwritten signs that say STOP THE KILLING.”

I feel sure that blurb alone sold more than a few books.

Jere once told me, “When you get old, you don’t regret what you did, you regret what you didn’t do.” One of Jere’s regrets came in the late ‘50s or early ‘60s when the Faulkner family asked then-young Jere to drive to Chicago (I believe that was the city) to pick up the Nobel Prize-winning author at the airport and drive him back to Mississippi. Jere’s uncertainty about navigating that long trip made him decline the request. He told me that story so many times I’m sure it was a decision he never quite forgave himself for.

Regrets are a part of life, and they’re mixed in with a myriad of other memories that bring us comfort, pride, happiness, a smile to our faces. Jere gave me a lot of those kinds of memories that I’ll never forget.

The state of Mississippi, perennially among the poorest in the station with an entrenched poverty that generations of conservative political leaders have done little or nothing to alleviate, has demanded that native son and football great Brett Favre refund some $828,000 in federal welfare funds that the state awarded him to make speeches and participate in a family-stabilizing” initiative. Favre says he already returned $500,000 of the $1.1 million that was granted him.

Problem was, as reported in Mississippi Today, Favre never even attended speaking engagements where he was scheduled to speak. For months, officials knew of the discrepancy but did nothing until State Auditor Shad White recently stepped up to the plate and made the demand.

Favre is one of 15 individuals and organizations to get letters from White’s office insisting on repayment of some $77 million in federal welfare funds doled out to them during the administration of former Mississippi Gov. Phil Bryant, a conservative Republican. Bryant was probably more than happy to award federal welfare grants to a Hall of Famer like Favre or retired WWE wrestler Ted DiBiase Jr., who owes $3.9 million. DiBiase’s dad, also a former WWE wrestler, owns $722,299.

Family member Brett DiBiase has already pleaded guilty to an alleged welfare scam and owes $225,950, according to Mississippi Today.

The Marcus Dupree Foundation, named after another football great and Mississippi native, owes $789,534.

Former Mississippi Department of Human Services Director John Davis authorized the $77 million handout and himself owes a whopping $96 million-plus! He faces embezzlement charges. Appointed to his post in 2016, Davis took his orders from Governor Bryant, but nobody is pointing a finger at Bryant—yet.

Most of these funds came through the so-called Mississippi Community Education Center, the owners of which also face huge multi-million-dollar refund payments.