In the pandemic and beyond, workers' greatest hope is when they stand together, and they can't depend on a political party to stand with them 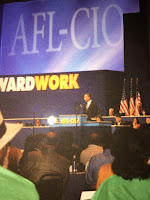 (To the right, Barack Obama at the 2005 AFL-CIO national convention in Chicago)

I remember being very impressed with the young senator from Illinois as he spoke at the 2005 AFL-CIO national convention in Chicago about the dignity of the worker and the bold history of the labor movement in this country.

“They could have accepted their lot in life or waited for someone else to save them,” Barack Obama told the crowd of thousands. “Through their actions they risked life and living. They chose to act. In time, they won. … It started with hope, and it ended with the fulfillment of a long-held ideal. A humble band of laborers against an industrial giant – an unlikely triumph against the greatest odds – a story as American as any.”

A few years later, as Obama became president, he saw those promises and dreams plunge into the abyss of the Great Recession as countless workers lost their homes and their livelihood. So what did the nation’s first African American president do? He assembled an all-star Wall Street insider group of advisers—Larry Summers, Timothy Geithner, Rahm Emanuel--to help him guide American Business back to safe harbor. Banks were too big to fail, and corporate bailouts were the order of the day.

As for those laborers whose praises Obama sang in Chicago, they got no bailouts and they struggled as best they could to survive.

Working class people in America today really have no safe harbor, even in a pandemic that has real unemployment hovering around 20 percent, the highest since the Great Depression. The Republican Party, as always, looks at them with deep suspicion that they’re all either freeloaders or potential freeloaders who want an easy ride on the back of the billionaire class that funds the GOP and the journalists and preachers who use their podiums to teach obedience.

In the White House is a renegade Republican who talked the talk to working people on the campaign trail but who never walked the walk. He serves the bosses, not the people who work under them. He orders meatpackers and poultry workers back to work but says nothing to the owners to make sure the workplace is safe. He has even promised owners protection from liability. Like your typical cookie cutter Republican, he is contemptuous of government oversight and safety regulations.

During the administrations of Franklin D. Roosevelt and Lyndon Johnson, workers could turn to the Democratic Party as a loyal ally. However, the party largely abandoned the working class after the 1960s and became the party of identity politics where one’s race, gender, and sexual orientation, not class, are paramount to one’s identity.

Obama and his vice president, Joe Biden, who now will lead the party in this year’s presidential election (among his likely advisers is Obama’s old hand Larry Summers), liked to boast their credentials as men of the people, but they led a party too beholden to its corporate donors and too bereft of a true uniting vision to speak to regular folks any more. That’s why many of those folks, out of desperation, turned to the empty promises of the demagogue who now occupies the White House. At least he offered them the illusion of a promise, certainly more than what Bill and Hillary Clinton ever offered.

Bernie Sanders was a ray of hope to working people, but he has largely joined the party machinery since his abdication. Perhaps he tired of being an outsider in the millionaires club that the U.S. Senate still is.

The current pandemic has exposed the ugliness of the American economy, where workers depend on the management class for their health insurance, which those workers lose when they lose their jobs.  Income inequality is at a 50-year high in the United States, which Donald Trump loved to boast as the world’s greatest economy before the coronavirus landed on our shores.

This is a nation where the prison system has become the world’s largest gulag, and struggling minorities and immigrants sit in its barbaric cells for months, even years, before they can receive a semblance of justice. Watch as those prisoners become an increasingly popular source of cheap labor. That’s what happened when sanitation workers in New Orleans went on strike earlier this month to protest their $10.25-an-hour average wages and unsafe working conditions during the pandemic. They were fired and replaced by prison inmates making $1.33 an hour.

Still more and more workers are rising up. Teamsters are once again revolting against the Hoffa dynasty that has compromised the union’s mission as a voice for laboring people. Smithfield Foods workers have protested the lack of safety measures in their jobs.

“At the edge of despair, in the shadow of hopelessness, ordinary people make the extraordinary decision that if we stand together, we rise together,” Obama told the crowd that day in Chicago in 2005. “And we do.”

He was right. Obama was always good at speeches. He told the truth, a lived truth and the only hope for American workers, and they don’t need a politician to tell them that it is true.