Mississippi with its poverty, lousy roads and ruling clique looks like the 1920s Louisiana Huey Long vowed to change 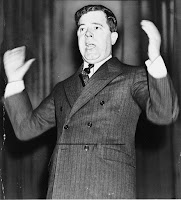 OXFORD, Miss. – When Huey Long first swept onto the political scene in Louisiana in the 1920s, the state was the quintessential Southern backwater. Ruled by a wealthy oligarchy of landowners, sugar and lumber magnates, and oilmen, it had less than 200 miles of paved roads.

It was sunk in a dismal swamp of poverty, isolation, corruption and ignorance. Its workers had little or no say over their pitiful wages or working conditions. Some 16 percent of its adult population was illiterate.

“The hierarchy was smug, satisfied with things as they were, devoted to the protection of privilege,” writes historian T. Harry Williams in his classic 1969 biography, Huey Long. “The ruling hierarchy was little interested in using what resources the state had available to provide services and was even less interested in employing the power of the state to create new resources so that more services could be supported.”

Then Huey Long bounded onto the political stage, first as railroad and public service commissioner, later as governor and finally U.S. senator. Hearing the cries of the voiceless, he chased the moneylenders out of the temple. He pushed through a severance tax on the pampered oil industry, revamped the state’s tax and bonding system, and used the money to put free textbooks into the hands of school children and 2,300 miles of paved roads and 111 new bridges across the state.

With its own ruling oligarchy entrenched in the Governor’s Mansion and state Capitol in Jackson, Mississippi is looking more and more like pre-Huey Long Louisiana.

Just like the ruling clique in Baton Rouge and New Orleans in the 1920s, the ruling clique that gathers in Jackson every legislative session is less concerned about public education, good roads and highways, public health, mental health, and child poverty than it is about corporate welfare and the proper pampering of the state’s wealthy.

With all the talk of charter schools and vouchers, the underfunding of public education in Mississippi has resulted in an adult illiteracy rate of 16 percent, exactly what it was when Huey Long began his political career. In the gulag that the modern-day South has become, Mississippi has always excelled in throwing people behind bars. Today 60 percent of the state’s prison inmates are functionally illiterate.

The Republicans in charge won’t raise taxes, so some of them now talk about instituting a lottery system to ease pressure on the shriveled state budget. Here’s a prediction: they’ll do the same with lottery revenues that they did with gambling revenues, which is to use the money as an excuse for another tax cut on the rich and corporations.

Look at Nissan, a global firm with a current market value of $38.4 billion. After an initial $363 million incentives package to get the Nissan plant in Canton back in 2000, Mississippi has provided the company with an additional $1 billion in tax breaks and other subsidies over the years.

Politicians defend such corporate welfare by saying it provides citizens with needed jobs. Yet when those citizens complain about poor working conditions and ask for a fair vote to decide whether they can have union representation, the politicians raise a hue and cry, and in the case of Gov. Phil Bryant, extend an invitation to outside groups to come in and help him fight against Mississippi workers who want a union.

Poor Ol’ Mississippi has the lowest median income in the nation, the highest poverty rate, and one of the highest child poverty rates. Her roads and bridges are terrible. However, she’s not so poor that she can’t continue to pamper Nissan and Toyota (beneficiary of an initial $356 million state handout) while handing out $274 million in tax breaks to Continental Tire the Americas and Edison Chouest last year.

“Where are the schools that you have waited for your children to have, that have never come?” Huey Long asked voters in his famous “Evangeline” speech in St. Martinsville, Louisiana, 90 years ago. “Where are the roads and the highways that you send your money to build, that are no nearer now than ever before? Where are the institutions to care for the sick and the disabled?”

After casting out the temple’s moneylenders, Huey reached for more and more power, and an assassin finally brought him down. Still, those questions he asked in St. Martinsville so long ago could be asked today in Mississippi.

This column appeared recently in the Jackson Free Press in Jackson, Mississippi.

Posted by Joseph B. Atkins at 2:27 PM No comments: