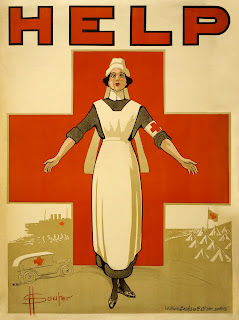 (A World War I poster)

Nurses at Mission Hospital in Asheville, North Carolina, voted overwhelmingly in favor of joining a union in their September 16 election. By more than a 2-to-1 margin, the nurses said yes to joining the National Nurses United (NNU) in the largest union victory at a Southern hospital since 1975.

The campaign was cited in an August 21 post on Labor South. The Mission Hospital had once been a proud non-profit operation beloved by the local community until its takeover in 2019 by for-profit HCA Healthcare, one of the nation’s largest hospital corporations.

Nurses complained as services declined, staff were let go, and quality of care became secondary to profits. When the hospital’s new corporate owners continued to turn a deaf ear to those complaints, four nurses began an organizing campaign that prompted a fierce reaction by HCA. HCA hired union busters at $400-an-hour to kill the effort, but they were unsuccessful in breaking the spirit of the determined nurses.

“Asheville nurses have set an example that will motivate and drive forward the many struggles breaking out in this period” of global pandemic,  said the North Carolina-based Southern Workers Assembly in a statement. The SWA was one of several organization supporting the unionization effort. “This victory will strengthen our movement to organize workers in NC and the South, as well as the movement to win Medicare for All, which NNU has been leading nationally.”

The Southern Workers Assembly also asked Labor South for a comment on the victory, and this was my response:

“This is a great union victory for the South and for the nation, for working people who want and deserve to have a voice in assuring the fairness, safety, and quality of their work places and working lives. Here you had a big national corporation come in from out of town to take over a beloved local hospital and turn it into a profit-making machine that placed the bottom line over regard for patients and staff. Four nurses stood up against this Goliath and inspired others to do so, and they won. Such victories provide inspiration for workers everywhere.”

Yours truly discussed this campaign during a September 4 interview on the podcast Keeping Democracy Alive with Burt Cohen. A key theme of that interview was that Southern workers defy the stereotype that they can’t be organized. They can. The South remains the nation’s least organized region because of the phalanx of opposition unions have faced, a phalanx that includes the South’s business and political leaders, churches, and media.  To win requires commitment and determination.

The struggle is greater, the stakes are higher, and the victories sweeter.

The Southern Workers Assembly, an organization of unions and various activist groups, and the United Electrical, Radio & Machine Workers of America (UE) are already targeting another ongoing campaign, that of sanitation workers in Virginia Beach, Virginia. Those workers shut down work on August 19 as they demanded hazard pay in the midst of the pandemic.

For more than two decades, the UE has been devising different strategies for organizing workers in North Carolina and Virginia.