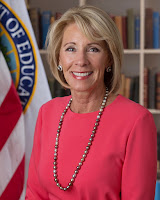 Here’s a short roundup of activity across the region and nation that caught Labor South’s attention:

U.S. Education Secretary Betsy DeVos, an heiress and billionaire's wife who came to office with a Gordian Knot of ties to debt collection agencies and for-profit education service companies, is pushing a new rule that will make it more difficult for student victims of fraudulent loan companies or for-profit colleges to get relief from their debts.

Claiming taxpayers shouldn’t bear the burden of that debt relief, DeVos wants to end an Obama-era program that provided federal assistance to students burdened with debt incurred from bogus colleges and barracuda-like loan operations. The new rule will put more of the burden on students to prove fraud with each case being considered independently and not jointly, as was often the case during the Obama Administration.

U.S. Sen. Lamar Alexander of Tennessee, a Republican and chair of the Senate Education Committee who once was considered a champion of public education, supports DeVos’ plan.

The Obama-era rule was implemented after the 2015 fall of Corinthian Colleges, which had lured students with bogus claims of job placements after graduation and then saddled them with debt that would take them years to retire.

During her confirmation hearings, DeVos had refused to say she would enforce federal rules protecting citizens from predatory institutions such as the ITT Technical Institutes and Trump University. As reported by The Center for Media and Democracy last year, Trump University had to settle a $25 million lawsuit accusing it of fraudulent activities. The Obama Administration shut down ITT Technical Institutes.

Student loan debt totals $1.5 trillion and is steadily increasing. Students who graduated in 2016 averaged $37,172 in debt as they went out searching for jobs and a new life. With Mississippi and other states across the South and beyond refusing to adequately fund state universities and colleges, tuition is rising each year, and so is the individual debt to attend those institutions.

In the past 10 years, the cost of attending the University of Mississippi has risen from $4,932 to $8,190 per year. Students in Mississippi have the fourth highest default rate—at 14.6 percent—in the nation.

Of course, if DeVos gets her way, the legal action sought by Hood and the Mississippi Center for Justice may be moot.  The U.S. Department of Education in February proposed a new policy that would put the federal government in charge of all oversight of student loan collectors and thus block states from their own regulatory oversight. As reported in The Hill, a dozen or more states have passed or considered passing legislation to regulate loan companies more closely.

LabourStart, the London-based organization that monitors and promotes workers’ rights around the globe, is waging a campaign to bring pressure on XPO Logistics to change a “toxic corporate culture” that LabourStart says has already claimed the life of at least one victim.

According to LabourStart, Lindo Jo Neal, a worker at XPO Logistics’ Memphis warehouse, “died on the shop floor after management denied her medical aid for 56 minutes” in October 2017. Other women have complained about issues at the company that include gender discrimination, sexual harassment, pregnancy discrimination, and unsafe working conditions.

XPO Logistics is one of the world’s largest logistics companies, and it has faced accusations both in Europe and the United States of anti-worker and anti-union actions.

LabourStart is working with unions representing workers at XPO across the world as well as the international trade movement to get the company to address the claims against it.

LabourStart is also a publisher and its published books include The Strangers Among Us: Tales from a Global Migrant Worker Movement, a 2016 collection of essays by writers around the world that was edited by Labor South founder, writer and editor Joseph B. Atkins.

Settling in at my desk now after a two-week journey through the South that included a visit to Lexington, Kentucky, where my wife Suzanne and I enjoyed the annual Harry Dean Stanton Festival. We watched several of Harry Dean’s classic films, heard lots of music from actor and musician friends like Dennis Quaid and Jamie James, and visited and chatted with family and friends like festival organizer Lucy Jones.

As Labor South readers may recall, I’m writing a biography of the iconic actor and musician for the University Press of Kentucky, so we also paid a visit to Harry Dean’s hometown of Irving and nearby West Irving, Kentucky, where he was born. This is where “the bluegrass kisses the mountains,” as they say around Irving, and I could see firsthand his classic Southern small town roots while also meeting cousins and former neighbors.

Then it was on to the Florida panhandle, where I got together with my own family in Pensacola and enjoyed a high-old birthday celebration given me, traded tall tales, enjoyed the beaches, and came back refreshed to wage battle once again with the corporate takeover of our nation.

Coming soon will be Labor South’s somewhat different take on the ongoing investigation into Russian interference into the 2016 presidential election, and a review of the U.S.’s own past involvement and sometimes catastrophic interference in the political affairs of other nations.