Is Biden's America starting to resemble Germany's Weimar Republic in the 1920s?

(To the right, a disabled German World War I veteran begging on a Berlin street in 1923)

In the mid-1970s I lived in Munich, Germany, and I used to love to hear Oma and Opa, my German grandparents Josef and Maria Stoller, tell stories of the old days. Still, many of those memories were painful. Tears would run down Oma's cheeks when she talked of the poverty and desperation of the 1920s, a time of out-of-control inflation, rising political extremism, and governmental incompetence.

“One day I was walking down a street to our apartment, and I saw a man feeding his horse a semmel (a Bavarian bread roll). I just stood there and watched. I was so hungry and I wanted that semmel so bad.”

Those were the days of the Weimar Republic, a period of some democracy in traditionally autocratic Germany but also one of great struggle with the impossibly punitive reparations France’s Georges Clemenceau and other Allied leaders had imposed after World War I. Another struggle was with the monarchal and industrial forces that still wielded power. 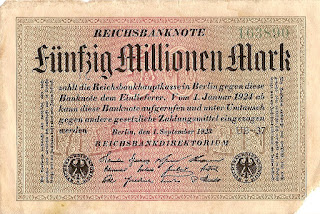 The value of the mark collapsed, inflation raged, and the Weimar government response was to print more money. By 1922, inflation topped 700 percent. “A wheelbarrow full of money couldn’t buy a newspaper,” the Britannica historical website says.

As the government floundered in finding solutions, the streets roared with political extremism and conspiracy theories.

Am I hearing echoes of the Weimar Republic across the United States today? Inflation, fueled by Western sanctions on Russia, has reached a 41-year high with energy prices rising 34.6 percent in May, fuel oil 106.7 percent, food costs ranging from 10 to 14 percent. The government in Washington, D.C., led by millionaires and financed by billionaires, is stalemated and grossly out of touch. It is willing to send $40 billion to Ukraine, thus further enriching the military-industrial complex Eisenhower warned us about, but unable to agree on spending an additional $10 billion for COVID-19 relief.

Crippled Germany saw political gridlock and a succession of leaders take over in the 1920s, but eventually the nation looked to an old war hero, Field Marshall Paul von Hindenburg, to lead it out of its morass. He was 78, the same age as Joe Biden when he became president. A monarchist with hardly a political vision, Hindenburg tried feebly to steer a course through the troubled political waters but, slipping toward senility and under the influence of close advisers, ended up handing the keys of power to the most extremist of all the upstarts around him, Adolf Hitler.

Fast forward to Joe Biden, who’s ostensibly holding the fort of America against a return of the autocratic extremist Donald Trump. Yet he has serious trouble getting his program through a divided Congress and is funding a distant war that has nothing to do with American security interests but that is doing serious damage to the nation and world’s economy. Biden talks about democracy and justice and his pro-labor, working class roots. Yet in his heart of hearts, he is a pro-corporate neoliberal whose foreign policies are enriching the rich while bringing suffering to average working class Americans.

Biden’s proxy war with Russia in Ukraine is an utterly misguided effort to continue U.S. post-Cold War dominance by weakening and humiliating Russia. It’s not working. Russia’s Vladimir Putin, tired of broken Western promises and continued military encroachment on his nation’s borders, is winning the war in Ukraine that the U.S. and NATO are largely funding. Ukraine is tragically a victim caught between competing world powers.

As in the other disastrous wars the U.S. has waged in the last 50 years, its political and military leaders don’t really know or understand their enemy. The same goes for the sycophantic mainstream, corporate-owned media—from the New York Times, Washington Post and Wall Street Journal to network news and CNN and Fox (BBC in England is no better). They are mainly mouthpieces for their government, publishing or broadcasting every memo from Washington or Kyiv whether validated or not.

Even when mainstream media begrudgingly acknowledges Russia’s gains—and Putin is close to complete success in the Donbas in eastern Ukraine—they never fail to remind us how Russia failed to take the capital city of Kyiv. They never explore the possibility that Russia did not want to destroy a city that is close to the heart and soul of Russian history and culture.

What are those lyrics from “Willkommen”, the theme of the 1966 Broadway musical Cabaret? “Leave your troubles outside. So life is disappointing, forget it! In here life is beautiful.”

Indeed life is beautiful where America’s oligarchs play. But, forget it, those of us on the outside are not “willcommen.”