Why hasn’t Koch Foods Inc. CEO Joe Grendys been placed under arrest? Apparently agents at the Immigration and Customs Enforcement (ICE) agency much prefer going after low-wage immigrant workers at poultry plants than fat-cat billionaires whose economic welfare is protected by their friends among the nation’s political elite.

Over the years workers at Koch Foods Inc. in Morton, Mississippi, and other poultry plants across the country have had to deal with harassment, sexual discrimination, refusal to allow bathroom breaks, charges for normal workday activities, and politicians from Donald Trump on down who’ve worked to reduce workplace safety controls and punish those who complain.

The massive raids and arrests of 680 Latino poultry workers conducted by some 600 ICE agents in Mississippi this month fit perfectly into a pattern that has existed for some time.

Just last year the Chicago-area-based Koch Foods, a $3.2 billion company, agreed to pay Latino workers $3.5 million as settlement of a lawsuit filed by the Equal Employment Opportunity Commission (EEOC) for racial and national origin discrimination and sexual harassment at its Mississippi operations. The settlement came after claims that supervisors would touch and make sexual comments to female employees and even strike workers physically. Those who complained were fired.

The recent raids in Mississippi came one the first day of school, thus separating parents from their children—a situation not unknown in the ongoing anti-immigrant-demagoguery of the Trump Administration. Friends and relatives begged the ICE against to “Let them go!” as they carried them off to unknown fates and possibly the concentration-like camps the federal government has allowed in its arrangements with the private prison industry.

Those cries for mercy may have been an embarrassing enough to force ICE later to release temporarily 300 of those arrested.

As far back as 2005, workers at the Koch Foods poultry plant in Morristown, Tennessee, were complaining of the dehumanizing conditions at the plant. When one female worker asked a supervisor for permission to go to the bathroom, “the supervisor took off his hard hat and told her, `You can go to the bathroom in this,’” a worker told New York Times labor reporter Steven Greenhouse.

Mississippians across the state have rallied on behalf of the arrested workers, collecting food and other items for families suddenly left without breadwinners and means to survive.

ICE is good at rounding up poor Mexican poultry workers but apparently maintains a hands-off policy on people like Koch Foods CEO Joe Grendys, a billionaire on the Forbes list of richest Americans. A raid at Koch Foods’ Fairfield, Ohio, plant in 2007 led to 161 arrests of undocumented workers, leading to a $536,046 fine for violation of immigration laws. The company maintains that it uses the federal E-Verify database to make sure its employees have proper documentation.

The nation’s political elite in the White House and Congress have no interest in arresting potential financial supporters like Joe Grendys. In fact, they see it as their mission to make life easier for him. Koch Foods is not related to the billionaire Koch brothers, although they seem to share the same attitudes about workers and worker rights.

Back in 2017, the Republican-led U.S. Senate, backed by President Trump, voted to eliminate a mandate to disclose injuries and even fatalities that occur at the worksite in poultry plants, which are among the most dangerous worksites in the United States. Three years earlier, the U.S. Department of Agriculture came up with plans to allow poultry plants to increase the speed of processing birds from 140 to 175 per minute. A coalition led by U.S. Rep. Bennie Thompson, D-Miss., led the fight against the new rules. In February of this year the USDA proceeded with allowing the greater speeds. 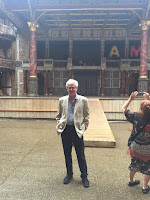 (Yours truly at Shakespeare's Globe Theatre in London)

LONDON – I complimented my Netherlands-stationed son Michael, who booked our hotel. It was in the perfect location. Southwark/Bankside, just south of the Thames, a red light district during the Roman Empire’s occupation of the area, called “Stew’s Bank” during Elizabethan times for the brothels then known as “stewhouses”. They stood alongside the bear-pits and bull-pits that were there. Also there were theatres like the Globe and the Rose, which hardly had a better reputation, but on their stages the plays of William Shakespeare, Christopher Marlowe and Ben Jonson were performed.

As I enjoyed a pint with my fish and chips at the White Hart pub, the wild-haired blond Boris Johnson was in another part of the city taking office as Britain’s new prime minister, promising that Brexit will be real in October and inspiring the same kind of sharp divisions that American citizens feel about Donald Trump. 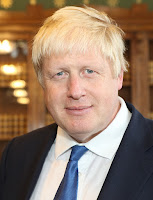 (To the right, Boris Johnson)

Like Trump, Johnson presents himself as a straight-talker and thus kind of a working class hero, but, again like Trump, he’s not. A former London mayor and once-star journalist who was fired by a major newspaper in London for telling lies in his stories, Johnson is brash, boorish, and brazen—sound familiar?—but his pro-Brexit stand understandably appeals to Britons tired of the European Union’s neo-liberal rule with its pro-corporate austerity policies and tone-deafness to the real concerns people have about poorly controlled immigration and the terrorist acts that have become associated with it.

Still, Johnson is part of the long-ruling Oxford-Cambridge-and-Eton-educated British elite, and for all his brashness, he “is not just a product of that system but an advocate for it,” writes journalist Gary Younge in The Guardian Weekly. “When we see him call for a massive tax cut for the rich, we see a candidate who has had much and wants more.” Sam Knight of the New Yorker says much the same. Johnson “seems to subvert the existing order but (his) persona—quintessentially English, amateur, clownlike—serves only to reinforce it. … He makes people in power, including himself, appear ridiculous, but that doesn’t mean he would dream of handing power to anybody else. He is a fully signed-up member of the tribe.”

During my recent visit to London, I asked an Englishman at a pub in Soho what he thought of Johnson. “No comment,” he snapped back with a wry smile. “What do you think of Trump?”

As Younge further elaborates, British is very much the class-based society it claimed it no longer was after World War II. Only 7 percent of the British population as a whole went to private schools, but nearly 40 percent of the nation’s elite did. The stretch between the wealthy and everyone else grows wider every day, not that this much concerns media elites, who went to the same schools as the politicians and business leaders they cover.

Although I lived in Germany for several years during the 1970s and have since traveled widely over the European continent as well as in Ireland and Scotland, I never visited London until this recent trip. The Queen, Buckingham Palace, tales of Charles and Diana and Harry and Meghan, the Changing of the Guard, and all that have never interested me. A failed philosopher, I was always drawn to the French and German existentialists, never to the dry-and-dusty analytic tradition that dominated British philosophy.

Still, I love literature and writers, and the city of Shakespeare and Dickens finally seduced me. Only a week there, and I agree with Samuel Johnson’s 18th century declaration that “when a man is tired of London, he is tired of life.” 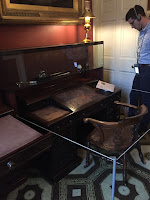 (To the right, Michael at Charles Dickens' desk, on which he wrote Great Expectations and A Tale of Two Cities)

Michael and I roamed the latest version of Shakespeare’s Globe and the site where the old Rose theatre stood 400 years ago. We went to the 130-year-old Garrick Theatre in West End and saw actor John Malkovich perform as corrupt Hollywood tyrant Barney Fein in David Mamet’s Bitter Wheat. We went to Dickens’ house on Doughty Street in Bloomsbury, where he wrote Oliver Twist, that great novel about a poor orphan caught in the malicious web of Industrial Revolution grime and greed. 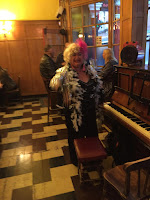 (Magic Betty and the Coach and Horses pub in Soho)

We spent a lot of times in London’s great pubs, including the Coach and Horses in Soho, one of many in the area where the Welsh poet Dylan Thomas drank and drank and drank. As the sky grew dark, the wonderful Magic Betty emerged in the pub full of spangles and smiles, sat at the piano, and banged away with “It’s a Long Way to Tipperary” and a hundred other songs in London’s great old Music Hall tradition.

That’s the London I came to see and saw--the great working class city that lies beyond the pomp and circumstance of Buckingham Palace, the city where Marx spent much of his life, where Churchill directed the war effort against the Nazis. There was a lot I didn’t see, of course. Seeing labor troubadour Billy Bragg would have nicely added to the experience, but maybe next time!