Monte Hellman, a master of "the language of the cinema" 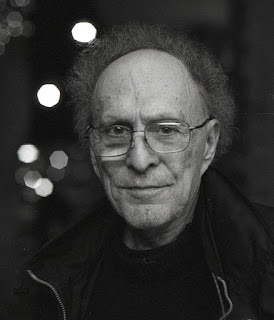 Monte Hellman, one of the best but also least well-known of the New Hollywood directors of the 1960s and beyond, died last week at the age of 91. With films like the ultimate road movie Two-Lane Blacktop (1971), Cockfighter (1974), the twin existential Westerns The Shooting (1966) and Ride in the Whirlwind (1966), and the neo-noir Road to Nowhere (2010), Hellman established himself as a daring minimalist in Hollywood, the Samuel Beckett of the Big Screen.

Hellman was trained in the theater, an intellectual whose Theatergoers Company  brought Samuel Beckett’s Waiting for Godot to the Los Angeles stage in a premiere production in the late 1950s. Working with producer/director Roger Corman early in his film career, Hellman cut his teeth on biker and terror films as well as in radio and television productions before emerging as a truly unique force behind the camera.

I spent a couple days at Hellman’s Airbnb in Hollywood’s Laurel Canyon back in March 2018. I was doing research for my biography of actor Harry Dean Stanton, whom Hellman had directed in three films: Ride in the Whirlwind, Two-Lane Blacktop, and Cockfighter. He wasn’t feeling well the day I interviewed him, but he sat down with me for probably an hour and talked about movies. 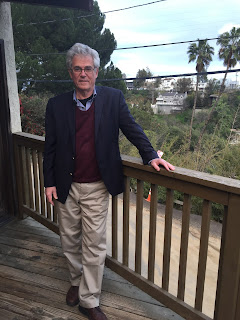 As he talked, I looked at our surroundings--books everywhere, a wide collection of Asian art, a workout machine, pool outside, a framed photograph of a young Jack Nicholson, whose career got its start via both Corman and Hellman.

“When I look back at my movies, I basically made movies unconsciously,” he told me. “I am an intellectual in other areas, but not in making movies.”

He said he never thought of his filmmaking as art. “We didn’t think of it as anything. The problem was getting through each day, getting your pages shot.”

I learned during the interview that Hellman could be contradictory, or maybe he was also playing with me a bit. He told me he hadn’t read British film writer Brad Stevens’ book on the director’s life and work, yet Stevens in his Acknowledgements thanks Hellman for his “thorough proof-reading/fact-checking of the manuscript.” Hellman frequently downplayed his own legacy. “In reality, I have always been a hired gun,” he said back in 1987. “I have usually taken whatever job came my way.”

Yet, in an interview with Notebook in 2017, he was quite critical of much modern filmmaking. “They aren’t learned in the language of the cinema," he said. “American films these days are designed by committee, by a team of people. … It’s true even in Europe nowadays. You’ve got a lot of people involved in making a lot of decisions, when it used to be one person’s call to make.”

As for independent filmmakers? “Of course, there are exceptions, but most independents are just another arm of the studio.”

Born Monte Himmelbaum in Brooklyn, New York, and educated at Stanford University and the University of California at Los Angeles, Hellman went to the South for two of his most important films, Cockfighter and Two-Lane Blacktop, the latter of which begins in California but ends up in Arkansas, Tennessee, and North Carolina. Cahiers du Cinéma called it “one of the greatest American films of the 1970s.” For Cockfighter, a film based on Charles Willeford’s novel, Hellman went to rural Georgia to tell the story of cockfighting champ Frank Mansfield, played by Warren Oates.

Hellman told me he had always been fascinated by subcultures like the rural South’s cockfighting world. “The people who were the cockfighters were really interesting. They actually contributed a lot to the screen. They were cockfighters, a lot of them.”

Hellman chuckled about the film’s alternate title Born to Kill. “I like to say `Hatched to Kill’.”

Hellman’s success as a director—a success that didn’t translate to big Box Office earnings—can in part be attributed to how he worked with actors like Warren Oates, Jack Nicholson, Millie Perkins, Laurie Byrd, and Harry Dean Stanton. “I think in order to make an actor comfortable in doing all the things they have to do to expose themselves in the process of acting, you have to make them feel like you are not going to hurt them, that you will protect them,” he told me. “Except for the very beginning, when nobody knew anything about me, I have managed to convey that to actors I’ve worked with.”

Hellman put his actors in austere settings—the American West, the rural South, the Philippine jungle—where everything is primitive, stripped down to its essentials.  Even the language is stripped down. It’s a stark, clear-eyed way of looking at life, a cinematic language as practiced by Hellman’s own favorite directors—Samuel Fuller, John Huston, Carol Reed—and one he mastered in his own life.

A battle was lost but not the war in the union defeat at Amazon's Bessemer, Ala., warehouse 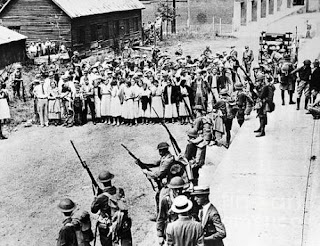 (A photo from the 1934 Southern textile workers' strike)

The woman’s face still haunts me. Lined from many years of work on the farm and then in the cotton mills, she is nameless in my memory, just another “linthead” in the eyes of the mill owners, “white trash” others might say, someone off the cow patch and now in a factory in some Southern backwater working 12-hour days.

In her eyes, however, was a spark of something, a flicker of hope, and it came from the union she and countless other cotton mill workers were desperate to join back in the 1930s. “We began to feel we could be a part of a great movement,” she said in filmmakers George Stoney, Judith Helfland, and Susanne Rostock’s landmark 1995 documentary The Uprising of ’34.

The film details the massive uprising of textile workers in the South against the medieval work conditions imposed on them by the mills that had lured them off the farms in the hope for a better life. They first struck in the late 1920s and then again in the 1930s, only to be brutally beaten down by gun thugs doing the will of the mill owners and their investors up North.

It would take decades and Crystal Lee “Norma Rae” Sutton before unions successfully organized in the textile industry in the South, forcing giants like J.P. Stevens finally to recognize workers’ legal rights to join together in a united voice in seeking a fair wage and decent working conditions.

It’s a lesson in history worth remembering now that the workers at Amazon’s giant Bessemer, Alabama, warehouse have voted down a union by a 2-to-1 margin. Organizing in the South requires a commitment for the long haul. It needs homegrown warriors like Sutton and back in the 1920s and 1930s like Ella Mae Wiggins, Howard Kester, and Lucy Randolph Mason.

The South has a long and tortured labor history, something not taught in the classroom, not preached from the pulpit, not discussed in legislative halls, news pages, or in the coffee shops. It’s a hidden history because that’s the way the phalanx of Southern anti-labor forces—the politicians, businessmen, preachers, and publishers—want it.

The effort by the Retail, Wholesale and Department Store Union (RWDSU) to organize the Bessemer workers only began last June. Amazon responded with the virulent anti-union campaign one expects from any company. Only this is a $1.7 trillion giant that is the veritable symbol of modern-day capitalism. What followed were forced anti-union sessions with workers, anti-union placards everywhere, online spying to see which workers are supporting the union, the hiring of Morgan Lewis & Bockius, one of those piranha-like law firms that specialize in destroying organizing campaigns.

The pandemic created a ton of stress on Amazon workers with sharp demands to deliver and deliver faster growing daily while safety conditions deteriorated. Amazon is organized in other parts of the world but like the foreign auto companies that dot the South tolerates no union in Dixie.

As in the United Auto Workers campaign at the giant Nissan plant in Canton, Mississippi, that failed by a wide margin in 2017, the workforce at the Bessemer warehouse is mostly black. President Joe Biden, prominent black Georgia Democrat Stacey Abrams and Black Lives Matter came out with strong support for the Bessemer workers’ effort, but precious little was heard from the NAACP. Perhaps Amazon’s largesse to their pet projects played a role in that silence. Amazon has boasted of contributing some $27 million to the NAACP and other organizations fighting racism.

Some strong condemnations from the NAACP and Black Congressional Caucus of Amazon’s treatment of its workers might have made a difference. Big corporations today are every bit as brazenly anti-union as J.P. Stevens was, but they’re scared to death of being called racist. That’s the kind of bad press that shakes them to their foundations.

I mean, my gosh, the NAACP is silent when even troglodyte Republican Senator Marco Rubio of Florida came out in support of the Bessemer workers?

Amazon head honcho Jeff Bezos is a kind of corporate hero these days, but his company recently got slapped with a $62 million fine for stealing tips from Amazon delivery drivers over a two-year period. Yes, that’s the kind of company Amazon is.

Some speculate that the union loss in Bessemer may give momentum to efforts to pass the so-called PRO (Protecting the Right to Organize) Act in Congress, a piece of legislation that would undo a lot of the damaging effects of the Republican-spawned Taft-Hartley Act of 1947, ending things like right-to-work laws and forced corporate anti-union sessions. The U.S. House of Representatives has already passed the bill, but at this point a small handful of Democratic senators, including West Virginia’s Joe Manchin, have yet to sign on. Ending the filibuster is key to its passage, since Republicans are bound to use the filibuster to try to kill it.

The Bessemer workers, by and large, bought Amazon’s line that they don’t need a union, that the company will look out for their best interests, that things will get better. They may for a while, then it’s back to what works best for the bottom line.

That’s why organizers need to stick around, not give up, keep their eyes on the prize, even if it looks like a distant phantom that may never become real. Workers need that flicker of hope in their eyes that I saw in that woman in The Uprising of ’34. Without hope, what is life?