Phil Ochs wanted Mississippi to "find another country to be part of." Now it's the very heart of America

OXFORD, Miss. – Way back in 1964, the year of “Freedom Summer” and the disappearance and death of three civil rights workers in Neshoba County, the “singing journalist” Phil Ochs offered this elegy:


“Here’s to the land you’ve torn out the heart of
Mississippi, find yourself another country to be part of”

More recently an anonymous writer who calls himself the “Socialist Wizard” composed and published a new version of Ochs’ classic with President Trump taking Mississippi’s place. In the song, the singer asks that the president find “another country to be part of”—another sign perhaps of what writer Peter Applebome has called “the Americanization of Dixie.”

As 2018 draws to a close, and 2019 looms ahead, Mississippi, as extreme as it has always seemed to many Americans, is indeed a microcosm of the nation. In the 2018 election, Mike Espy, a black Mississippian with impressive credentials as a former congressman and U.S. secretary of agriculture, came closer than any Democrat since 1982 to winning, garnering 46 percent of the vote in a racially divided state.

Still, he lost to Trump devotee Cindy Hyde-Smith, who made her president, gun rights and the evils of abortion and illegal immigration the most important election issues to her white supporters in the nation’s poorest state. No matter that Mississippi already has the nation’s most restrictive laws on abortion, or that illegal immigration is at a 12-year low.

Espy, hardly a wild-eyed radical as a former supporter of Republican Mississippi Gov. Haley Barbour and card-carrying member of the National Rifle Association, campaigned largely on the need to do something about the state’s (and nation’s) deteriorating health care system.

Nationally, the Democrats took over the U.S. House of Representatives in the elections, but they lost ground in the U.S. Senate, where Senate Majority Leader Mitch McConnell has already indicated he’s once again going after Social Security, Medicare and Medicaid along with the complete dismantling of the Affordable Care Act. The pretext for a renewed assault on Social Security and other popular safety net programs? The U.S. budget deficit, of course! Never mind that McConnell and his fellow Republicans deeply worsened that deficit with the gigantic 2017 tax cut they bestowed on the nation’s richest (and most solidly Republican voting) citizens.

With Democrats in charge of the U.S. House, new momentum in the longstanding investigation into Russian meddling in U.S. political affairs can be expected. Looking beyond just the 2016 election and Trump’s White House, let’s hope investigators will give close scrutiny to K Street lobbyists such as former U.S. senator from Mississippi Trent Lott, who gave up his office to join with his buddy and former Democratic U.S. senator from Louisiana, John Breaux, to form a powerful lobbying team in 2008. Lott and Breaux were principal lobbyists for Gazprombank, a subsidiary of Russia’s biggest natural gas supplier, in 2014, according to journalist Craig Unger’s new book House of Trump, House of Putin.

Unger goes on to write that Haley Barbour’s lobby firm, Barbour Griffith & Rogers, has been the beneficiary of $2 million in payments from the Russian conglomerate Alfa. These are all part of a wide-ranging network of Russia’s big money influence in Washington, D.C.

These days Trump is rattling his saber at General Motors for the firm’s recent announcement that it was shutting down five plants, four of them in the United States, and cutting 14,000 jobs, all in the wake of Trump’s self-ballyhooed deal to replace NAFTA with a  new, worker-friendly trade deal.

Just days before GM’s announcement, Nissan chairman Carlos Ghosn was arrested and soon to be fired in connection with allegations he had dipped into company coffers for his own further enrichment and at the same time underreported his earnings at the company.

Yes, this is the same Carlos Ghosn who bitterly fought workers’ efforts to organize at his plants in Mississippi and Tennessee and who was welcomed in Mississippi as a corporate hero for bringing Nissan’s giant plant to Canton.

Phil Ochs, what would you say to this turn of events? Mississippi, no need to find another country to be part of. You’re very much the heart of this one.

A version of this column will appear as my last regular monthly column for the Jackson Free Press, although I hope still to appear in those pages from time to time. My Labor South blog continues, of course, and I hope to be able to devote more time to it and make it stronger than ever. I’ve been writing a regular column for Mississippi newspapers for 35 years, the last six at the Jackson Free Press, but book writing, teaching and other duties have made it difficult to continue. The column has been a great ride, but I’ll be still firing away in this blog and elsewhere! Best wishes to all for a wonderful Christmas and Happy New Year!

Posted by Joseph B. Atkins at 8:22 AM No comments: 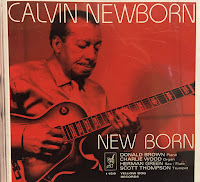 The best thing about Beale Street in Memphis some years back was at the King’s Palace where the great jazz guitarist Calvin Newborn played regularly. He was with organist Charlie Wood’s small band at the time, and he was the highlight with his wry smile and long, mellow, perfect riffs.

Long after Calvin left his native Memphis and moved to Florida, I found a copy of his CD New Born at Shangri-La Records on Madison Avenue. For the next few months, I rarely drove in, around, into or out of Calvin’s city without having “The Streetwalker’s Stroll” or “Spirit Trane/Omnifarious” playing on my car’s CD player. Both tunes had an urban vibe that matched the scenery around me, a uniquely Memphis urban vibe that’s never too far from the same rich Delta soil that has forever fed the city musically.

Calvin died this week at the age of 85 at his home in Jacksonville, Florida. With his passing goes a Memphis jazz dynasty that included his father, bandleader Phineas Newborn Sr., and his brother Phineas Jr., whom jazz critic Leonard Feather once called “the greatest living jazz pianist.”

(To the right, Phineas Newborn Jr.)

Even in death, Calvin remained somewhat in the shadow of his more famous brother. Phineas Jr., whose troubled story was beautifully told in Memphis-based writer Stanley Booth’s classic 2000 book Rythm Oil: A Journey Through the Music of the American South, suffered mental problems his entire life—he had his first nervous breakdown before he turned 30—yet produced music of such surpassing beauty and genius that Count Basie and another Memphis jazz great, bandleader Jimmie Lunceford, became two of his biggest champions. Phineas Jr. and Charles Mingus joined to do the soundtrack for John Cassavetes’ 1959 film Shadows.

Among my vinyl treasures is a copy of Phineas Jr.’s album Solo Piano with its cover depicting the pianist as the Sphinx he truly was in life.

Calvin and Phineas grew up in the working class Orange Mound neighborhood in south Memphis, where “on nearly every block, there’s a reputed crack den covered in gang graffiti, or a few stray bullet holes from a recent drive by shooting,” writes Andria Lisle in the liner notes to New Born. “In the summer time, the kids play outside, but not too far from their own doorsteps.”

Their father was a famous bandleader who would hang out with traveling musician friends like Count Basie and Jimmie Lunceford when they came through town. When the boys got old enough, they’d play in their father’s band at Plantation Inn in West Memphis, where whites went to party at night. Then they’d cross the river back into Memphis and go to Mitchell’s on Beale Street, where they’d jam into the early morning.

Phineas Jr. was a year older than Calvin, and the two boys were as different as night and day in many ways. Phineas Jr. was quiet, cerebral, withdrawn, all he wanted to do was sit at the piano and play, play, play. Calvin was like his grandfather, who played electric guitar at the Church of God in Christ and jumped around the altar shouting the glory of God to the hand-clapping, foot-stomping congregation. Memphis writer Robert Gordon tells the story through the eyes of the boys’ mother, Mama Rose, in his recent book Memphis Rent Party.

“That’s why Calvin’s got to move,” she said about her youngest son, who never knew his grandfather. “It was just in ‘em both to move! And it was in their daddy and me, too. I used to dance and play the piano, played organ at church. Just music lovers.”

Calvin was the extrovert all right, full of antics and jumping high on stage. “I was about six feet in the air, playing the guitar” he told Robert Gordon.

Phineas Jr. just sat at his piano, the Sphinx weaving beautiful melodies or bebop magic with his gliding, sliding, jumping fingers, letting those fingers do the acting up.

By the time I got to Memphis and saw Calvin, he had slowed down a bit, no longer jumping six feet high, calm in his chair, watching his fingers glide and slide up and down the neck of his guitar. Still, he’d glance up at the audience from time to time, a little grin on his face, a glint in his eye that told you he was still his own man, and he still might jump if he had a mind to.