What would Jesus the Migrant say to Mississippi politicians this year?

In her new book Jesus Was A Migrant, writer Deirdre Cornell says migration is central to “biblical spirituality” and the chosen people themselves were “displaced, uprooted, homeless” migrants. Joseph, Mary and Jesus were refugees as well as migrants when they fled to Egypt to escape Herod’s tyranny.

“Jesus belonged to a people indelibly marked by stories of Exodus and exile,” Cornell writes. “His life and ministry are framed by these narratives.”

Moses tells us in the Old Testament’s Deuteronomy our duty to migrants: “You shall also love the stranger, for you were strangers in the land of Egypt.” 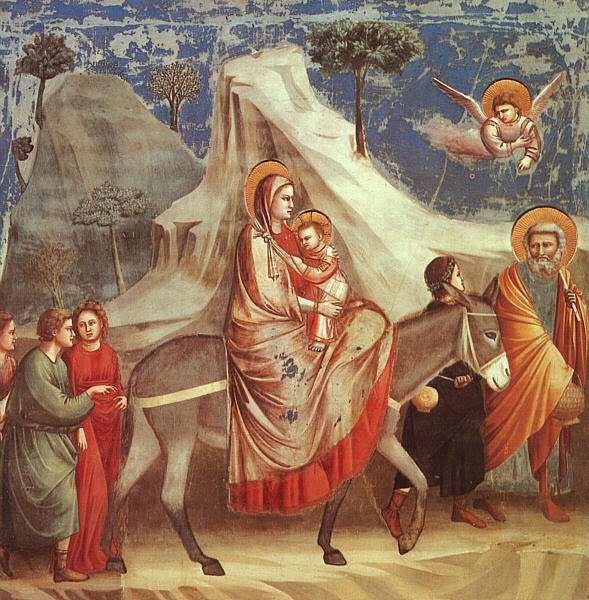 (Giotto's depiction of the Holy Family in exile)

I’ve got a feeling that migrants are not going to be feeling the love in Mississippi in 2015. Gov. Phil Bryant is up for re-election, and that’s not good news for migrants.

After the bruising 2014 midterm elections that saw veteran U.S. Sen. Thad Cochran, R-Miss., defeat Tea Party candidate Chris McDaniel in the Republican primary, Bryant is going to have to mend some major fences for his support of Cochran. He boasted his Tea Party credentials when he got elected governor, but then when push came to shove he supported the well-oiled Country Club wing of the party.

As deeply bitter as Tea Partyers are about Big Money Republicans like Cochran and former Mississippi Gov. Haley Barbour, they may like undocumented migrant workers even less. In his role as state senator, Chris McDaniel “authored scores of anti-immigrant bills,” according to the Mississippi Immigrant Rights Alliance, which anticipates a “backlash of racist, anti-immigrant proposals (to) come through in the 2015 Legislative Session.”

Bryant built his political career in part on demonizing undocumented migrant workers. As state auditor in 2006, he issued a report claiming they cost the state millions of dollars in education, health care, and other undeserved benefits.  Yet a 2013 Immigration Policy Center study shows they also generate nearly $600 million in economic activity even though they remain excluded from most government benefits.

Last July Bryant wrote a letter to President Obama declaring his intention to “prohibit the federal government or its agents from housing large numbers of new illegal immigrants” in Mississippi. Apparently he has no problem with housing thousands of them in prison. Mississippi even has a special prison for immigrants, the for-profit, 2,500-inmate Adams County Correctional Center in Natchez, one of 13 such facilities in the country.

In his response to the huge crisis of migrant children seeking shelter in the U.S. from violence and abuse in their native Honduras and El Salvador, Bryant declared he would no longer accept children in Mississippi as part of the federal Unaccompanied Refugee Minor Program.

Obama told the nation in November that he would offer up to five million undocumented workers protection against deportation and a pathway to getting legal work permits, and the Republican outcry was immediate. Cochran, U.S. Sen. Roger Wicker, R-Miss., and other GOP leaders in the state blasted Obama for what they considered a power play and abuse of office.

“While the president grants amnesty to countless illegal immigrants, millions of American citizens are still struggling to find work,” U.S. Rep. Steven Palazzo, R-Miss., said in a statement. “It’s time for the president to stop playing politics and instead put the American people first. I will do everything within my power to prevent this unconstitutional and unwelcomed action.”

Coming after years of congressional inaction, Obama’s executive order—and the president quoted scripture in his message to the nation--is expected to affect about 45 percent of the nation’s 11 million undocumented workers. An estimated 9,000 migrant workers in Mississippi will be eligible for protection and/or work permits under Obama’s order.

Changing demographics that include a fast-growing Latino population have national Republicans worried that the anti-immigrant politics of conservative Tea Partyers will hurt the party’s chances in future elections. Corporate-minded Republicans like Haley Barbour value the cheap labor pool migrant workers provide. However, those demographics aren’t changing fast enough in Mississippi to worry Bryant and Tea Partyers like Chris McDaniel unduly.

Too often missing in the debate are the migrants themselves. Their voices are rarely heard. Writers Russell King, John Connell and Paul White eloquently described those voices in their 1995 book Writing Across Worlds:

“The migrant voice tells us what it is like to feel a stranger and yet at home, to live simultaneously inside and outside one’s immediate situation, to be permanently on the run, to think of returning but to realize at the same time the impossibility of doing so … . It tells us what it is like to live on a frontier that cuts through your language, your religion, your culture. It tells of long-distance journeys and relocations, of losses, conflicts, powerlessness, and of infinite sadnesses that severely test the migrant’s emotional resolve.”

Posted by Joseph B. Atkins at 9:55 AM No comments: