Union vote at Nissan in Canton, Mississippi, set for August 3-4

Thousands of workers at the giant Nissan plant in Canton, Mississippi, will be able to cast their ballots on whether to join the United Auto Workers in an election set for August 3 and August 4.

A petition had been filed earlier for a July 31/August 1 vote, so the actual election will come only a few days later.

The vote marks the culmination of a 12-year struggle by workers for an intimidation-and-threat-free union election at the plant, where the workforce is 80 percent African American. Local Nissan managers have strongly opposed unionization even thought the company ownership claims neutrality. Workers have been forced to watch anti-union videos, and pro-union workers have complained of harassment on the job.

With the rallying cry "Labor Rights Are Civil Rights", the campaign has include a widespread community grassroots effort with local ministers, civil rights-era veterans and students from nearby Jackson State University and Tougaloo College as well as the University of Mississippi standing side-by-side with the workers. International attention has also focused on the campaign--from as far away as Brazil and also France, where the government controls a percentage of Nissan's partner firm, Renault, and thus has influence on Nissan operations.

However, Mississippi Gov. Phil Bryant and the Republican leadership of the state Legislature in Mississippi, along with the Mississippi Manufacturers Association and outside groups such as the influential Koch Brothers, can be expected to use their influence to help defeat pro-union forces. This is what happened in Chattanooga, Tennessee in 2014, when workers at the Volkswagen plant sought a union. U.S. Sen. Bob Corker, R-Tenn., even promised that Volkswagen would expand operations if the union was voted down. Workers narrowly rejected the union in the vote.

Workers in the South are standing up for their rights and making gains. Autoworkers at the giant Nissan plant in Canton, Mississippi, this week asked the National Labor Relations Board for a vote on July 31 and August 1 on whether to join the United Auto Workers. This marks the culmination of a 12-year campaign, which Labor South has followed more closely than any other news outlet. An NLRB petition for a vote requires that at least 30 percent of the workforce approve the vote. A union victory requires 50 percent plus one. 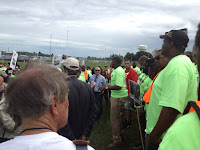 (To the right, civil rights-era SNCC activist Bob Zellner in sunglasses at the center and actor Danny Glover to the right of him at a pro-worker rally at the Nissan plant in 2014)

In North Carolina, farm workers have made steady gains in securing worker rights with the help of organizations like the Farm Labor Organizing Committee. However, the state's arch-conservative legislators, backed by deep-pocketed anti-union moguls like Art Pope (North Carolina's version of the Koch Brothers), aim to destroy those gains. LabourStart, the London-based international labor activist network and publisher of my recent collection of essays by writers around the world on the migrant worker issue, The Strangers Among Us: Tales from a Global Migrant Worker Movement, recently filed this report from the U.S. South, asking for help in keeping those farm workers' hard-earned gains. Labor South posts this call for help on behalf of Eric Lee, who heads LabourStart: 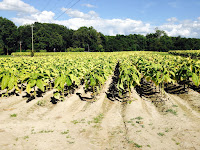 (To the left, a typical North Carolina tobacco field harvested by migrant workers from Latin America)

Following a series of recent farmworker wins in the southern United States, farmers elected to the North Carolina State Legislature are trying to use their legislative power to stop workers on their own farms from organizing for better wages and working conditions.

On 28 June, the North Carolina General Assembly passed Farm Bill S615 with no debate. The bill aims to stop the progress that farmworkers are achieving by making it illegal for farmers to deduct dues from union members as well as making it more difficult for farmworkers to win union contracts.

The bill would make it illegal for farmworkers to ask growers to sign an agreement with their union as part of settling a lawsuit over wage or labor violations.

US farmworkers are excluded from the National Labor Relations Act and other worker protections like minimum wage, child labor, and workers compensation laws, among others.

However, through the efforts of the Farm Labor Organizing Committee (FLOC), farmworkers have won union contracts that include wage increases, job security, and improved working conditions.

This bill aims to roll back this progress.

Please join FLOC and the International Union of Foodworkers (IUF) in calling on North Carolina Governor Roy Cooper to veto the bill. Your message will be sent by email to the Governor and delivered as part of a signed petition.

And please share this message with your friends, family and fellow union members.

Eric Lee
Posted by Joseph B. Atkins at 7:53 AM No comments:

A visit to Munich and a reminder of the poor state of mainstream U.S. journalism--from Fox News propaganda to MSNBC's Russia obsession