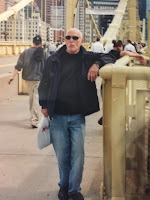 (To the right, Marty Fishgold in Pittsburgh in 2009)

My late friend Marty Fishgold was an old-time union man who brooked no nonsense in his fight for the working stiff. A Brooklyn native and descendant of Russian socialist immigrants who’d escaped the Czar’s pogroms for a new life in the USA, Marty could be as tough on union bosses as he was on corporate bosses.

It’s these guys at the top with their big houses and their big cars, he’d warn me as we talked into the wee hours on the struggles of the labor movement. A former president of the International Labor Communications Association and longtime editor of The Unionist in New York City, Marty wasn’t talking about CEOs. He was talking about union leaders.

I thought about Marty when I heard the news that workers at the Volkswagen plant in Chattanooga, Tennessee, narrowly voted down an opportunity to join the United Auto Workers at the June 12-14 election. The vote was 833 no and 776 yes. Just 29 more yes votes would have swung the election the other way, a closer margin than even the 712-626 vote at the plant in 2014.

Why did I think of Marty? Maybe this April 2 headline in the Detroit News had something to do with it:

In that story, former UAW vice president Norwood Jewell pleaded guilty to labor conspiracy in an investigation that tagged him as enjoying wine and cigar parties costing up to $30,000, $7,000 steakhouse meals, and other luxury life benefits on the tab of executives at Fiat Chrysler. In exchange, the executives wanted Jewell’s cooperation in getting his union to agree to contract concessions for Fiat Chrysler workers. Jewell is one of several UAW officials targeted in the federal investigation.

“I wasn’t perfect. I was getting stuff from Chrysler and I can’t do that,” Jewell admitted in the courtroom.

“I have to wonder if crap like this may have swung enough votes away from the UAW in Chattanooga to give VW/Republicans the win,” my good buddy and stalwart labor news source Lew Smith pondered in an email to me. A former seafarer, Smith is a lifelong union man.

Just how much the UAW scandal affected voting workers is uncertain, just as the effect of VW’s own scandal regarding diesel emissions—former VW boss Martin Winterkorn faces related fraud charges—is unclear. What is certain, however, is that it gave the entire phalanx of government officials, including Tennessee Governor Bill Lee, outside anti-union groups, and VW supervisors plenty of ammunition with which to attack the UAW in the days leading up to the election.

What has been interesting in the unfolding story of union organizing activity at VW in Chattanooga is the position of the German-based company itself. Organized in 43 of its 45 plants, VW has always boasted an open mind toward labor and pledged neutrality. Behind the scenes, however, its supervisors at the plant did their best to scare workers and talk trash about the union. The company refused to sit down at the bargaining table after the pro-union vote by skilled trades workers at the plant back in 2015, a source of subsequent litigation.

My suspicion is that the seeming VW turnaround on neutrality had at least something to do with pressure from Lee and other top Tennessee officials. The Republican leadership in that state, much like everywhere else in the South and beyond, see unions as the devil incarnate, the ultimate challenge to their oligarchical control not only the Southern economy but also Southern politics. Once Southern workers develop a union culture, what would that portend for the corporate subservient political leadership across the entire region?

I wrote about this kind of thing in my book Covering for the Bosses: Labor and the Southern Press back in 2008. In 1984 the Japanese firm Mazda wanted to locate a plant in Spartanburg, South Carolina, something you’d think would have local officials dancing in the aisles. What happened, however, is they stepped in the shadows and let the area’s largest employer, textile baron Eugene Stone, inform Mazda officials that their company was not welcome. Mazda’s coming would only force an increase in wages overall in the area, putting pressure on Stone and other local employers, and up the chances of an invasion by the UAW. When Mazda decided to locate the plant instead in Flat Rock, Michigan, the local Greenville News ran a story with the headline “Saved from Mazda”!

Beyond all this, however, is the UAW’s own culpability in the loss in Chattanooga. Perhaps exhausted after the 12-year-long losing struggle at the Nissan plant in Canton, Mississippi, in 2017, the union waged a limited campaign at the Volkswagen plant, depending heavily on radio and television ads to counter the barrage of anti-union ads bombarding viewers. Missing was the national and international campaign it waged on behalf the Nissan workers in Canton. Also missing was the kind of retail, gut-level campaign that worked successfully for the United Food and Commercial Workers at the Smithfield Food plant in North Carolina in 2008 and helped overcome the fierce efforts by anti-union forces to divide black, Latino, and white workers.

That election in North Carolina showed that Southern workers will join unions. Heck, the rise of the UAW back in the 1930s actually began with a strike at GM’s Lakewood Plant in Atlanta, Georgia, not in Flint, Michigan. 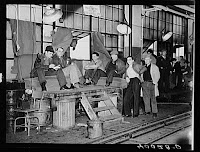 The UAW today is just a shadow of what it was under the long leadership of Walter Reuther, whose own rise as a labor leader paralleled that of the UAW.  When the union agreed some years back to a two-tiered wage system that divided veteran workers and new hires, it lost some of its soul.  It’s still today struggling to find its soul again.