An Editorial: Bipartisanship, Filibustering & the Ghosts of Thurmond and Helms

In calling for a bipartisan spirit on Capitol Hill--issued in his State of the Union address and later to a House Republican retreat in Baltimore--President Obama is a voice crying in the wilderness.

Surely he knows by now that the spirits of Strom Thurmond and Jesse Helms are what drives today's Republican Party. Yes, the Senate's champion filibuster and its "No" master. Thurmond, the ol' Dixiecrat seg from South Carolina who led the charge to change the South from solid Democrat to solid Republican, and Helms, the raging North Carolina ex-TV exec who earned the moniker "Senator No" for opposing practically everything that a South American dictator wouldn't want for his country.

Obama's trying to be above it all, a leader of all the people--that's what presidents are supposed to do--but he's also got to practice realpolitik. He needs a dose of manhandling Lyndon Baines Johnson to deal with Republicans, none of whom have any desire or intention to work with him or any Democrat for that matter. Why would they do anything that might remotely score a victory for the White House?

That's why Mississippi Gov. Haley Barbour's claim today on Face the Nation was disingenuous at best. He had the temerity to say that Republicans are willing to work with Democrats as long as they can find common ground on the issues. Barbour knows this is untrue, host Bob Schieffer knows this, and so does anyone else with any feel for American politics today.

This is an election year, and Republicans sense they might have a shot at regaining a lot of lost ground in Congress. They want Obama to fail, regardless of what that means to the nation. They don't care. That's the reality. Rush Limbaugh was the first to admit it, and he essentially is the leader of the Republican Party today.

What Democrats this past year should have done--here employing my 20-20 hindsight vision--is push as many bills to the Senate floor--health care, Employee Free Choice Act, jobs bills, etc.--that they could muster together. Let the Republicans filibuster, and let the nation see it. Let the nation see firsthand their self-serving obstructionism, that they're willing to let the nation go to hell in a hand basket if that's what it takes to score points for their side.

Thurmond, still the Senate's filibustering record-holder, and Helms are smiling from their graves, enjoying their one true, lasting legacy: the modern-day Republican Party.
Posted by Joseph B. Atkins at 12:55 PM No comments:

Wal-Mart's "Happy New Year!" to 11,000 of its workers this week was an announcement that they are all losing their jobs. The announcement came just two weeks after the company revealed plans to close 10 Sam's Club stores across the country (none in the South). The leopard doesn't change its spots, and Arkansas-based Wal-Mart is still Wal-Mart, which is to say something other than the bogus imagery of Mr. Sam, the Wal-Mart cheer, and the smiling, happy "associates" who, company PR insists, work there.

The real Wal-Mart is the miserly, union-busting,sweatshop-coddling mom-and-pop bankrupter that is telling those 11,000 "associates" they will get no severance pay unless they agree to waive any right to sue the company for discrimination, whether for age, race, or gender, according to today's Huffington Post. As a consolation prize, company officials have told these workers they can now apply for jobs at the company's new product sampling partner, Shopper Events (also Arkansas-based), which is hiring as many as 10,000 new workers. Hey, what do you think the chances are of a non-waiver-signing former "associate" landing a job with Shopper Events?

What is the subtext here? What sort of lawsuit is Wal-Mart worried about? I devoted a chapter to Wal-Mart in my book, Covering for the Bosses, and I learned a lot about this outfit. The company was hit with a class-action lawsuit in 2004 that claimed sex discrimination on behalf of 1.6 million former and current female employees. An internal audit that same year revealed thousands of labor violations, including the employment of minors during school hours and the working of employees through breaks and lunches.

Wal-Mart's founder, Sam Walton, once lamented the following: "I was so obsessed with turning in a profit margin of 6 percent or higher that I ignored some of the basic needs of our people, and I feel bad about it."

It's too late for Walton's crocodile tears. His successors aren't even shedding them.
Posted by Joseph B. Atkins at 6:30 PM No comments:

Memphis composer's a piano player for hire ... in a tux 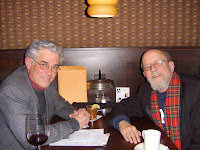 Happy 2010 to followers and readers! This first entry of the new year is a feature column about a Memphis composer who's also a regular working stiff--a piano player for hire ... in a tux. It's a little different from your typical labor story, but that's okay. This blog aspires to be a little different even as it pursues its central mission (for that, see the Manifesto, one of the blog's earliest entries). In the photograph, taken recently by my wife Suzanne at The Majestic, my favorite downtown haunt in Memphis, you see Boatner (to the right) and yours truly.

MEMPHIS – The new year is still a quarter-hour away, and our small group has gathered around the piano at Judd Grisanti’s Trattoria to hear John Boatner play As Time Goes By one more time. I’m a hopeless Casablanca fan, and, in my mind, Boatner is every bit as good as Sam was that night he played it for Rick.

As the clock ticks on to 11:57 or so, we all know what we want to hear next. Just as Boatner strikes the first notes of Auld Lang Syne, however, some philistine flips on the sound system and out comes Mylie Cyrus. We’re not to be deterred.

And he does, and we all enjoy our champagne and sing in 2010 with Auld Lang Syne.

The next time I see John Boatner is at The Majestic, a wonderful downtown haunt that offers diners silent films on a giant screen as well as great steaks and Sazeracs. He’s wearing a black coat with a red plaid scarf, drinking black coffee, and answering my questions about his long career as a pianist, composer, conductor, and teacher.

“Life would be hell without music,” he says. “You need three things in life: music, humor and laughter, and children.”

He’s the father of two grown sons, he’s got a hearty laugh, and he’s devoted to music.

You may have heard him if you’ve been in the famous lobby of The Peabody Hotel. He played the ivories there for 28 years as well as nine years at one of the city’s premier French restaurants, Paulette’s. He’s often in my hometown of Oxford, Miss., usually performing at the Downtown Grill on Homecoming Weekend.

Trained in classical and sacred music at Columbia University and Union Theological Seminary, Boatner spent years in New York working in ballet studios and churches before returning to the South, where he has produced and directed dozens of concerts, including the first public concerts of black and female composers presented in Memphis.

He has composed 20 published works—from cantatas and ballets to experimental music and theater pieces such as his Toot Sweet Trilogy. His Easter Cantata For An Unbeliever, performed at St. Francis of Assisi Catholic Church in Cordova, Tenn., in June 2009, incorporated rock rhythms on percussion as well as guitar folk music. Ever lyrical and deeply spiritual, he can also be as experimental as an Edgar Varèse or John Cage.

But classical composition rarely keeps food on the table—even if your works have been performed as far away as Germany, the Czech Republic, and Bulgaria. So Boatner is also a working stiff , piano player for hire—in a tuxedo. “Erik Satie is kind of my mentor,” he says. “He had to make a living playing piano.”

I ponder Boatner’s mustache and goatee. He even looks a little like the turn-of-the-century French composer, who also had a penchant for giving strange titles to his compositions, titles like Next-to-Last Thoughts and Pieces in the Form of a Pear. Satie kept food on his table by banging on the ivories in a Montmartre cabaret.

But years at the public piano can produce a bottomless well of stories. Boatner has played for Billy Joel, Barry Manilow, and President Clinton. He probably played for my wife Suzanne and me the evening I proposed to her at the Peabody lobby. “People come up to you and ask you for anything and everything, and you have to be ready.”

One evening after taking a break at the Peabody, Boatner returned to find one of the hotel guests picking out a tune at his piano. He went up to the man and said, “I think I look better than you do here.” When the man stood up to move out of the way, Boatner realized who he was. “By god, you’re Jon Voigt!” he said to the Academy Award-winning actor. Voigt wasn’t angry. “He was as nice as he could be,” Boatner recalls.

And after the exchange, Boatner sat down to play while Voigt listened.
Posted by Joseph B. Atkins at 11:10 AM 1 comment: