Saint Nick, that jolly old elf, the antithesis of greed, said some prayers for workers in 2021

(To the right, German immigrant artist Thomas Nast's depiction of Saint Nick in 1881.) 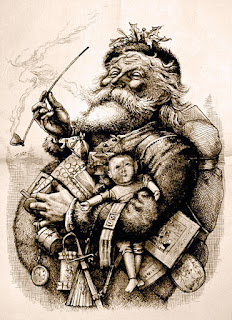 Old Saint Nick is not only alive and well in the hearts and minds of countless children as Christmas approaches but maybe many of the rest of us, too. He’s surely been saying some prayers for working people.

The jolly old elf is a counter-cultural hero in these modern times.  Fat and bearded with a red nose that attests to a real appreciation of spirits and food, he’s religious, loves his pipe, and doesn’t mind smudging his shiny red suit with chimney soot if it means bringing smiles to the faces of his most devoted followers. He’s the antithesis of greed, the very soul of helping and thinking of others, not himself.

We’ve almost forgotten his roots as a 4th century bishop and monk from what is today Turkey. During his life, he was devoted to the poor and became famous for providing dowries for three sisters of a poor Christian family who faced a life of prostitution without his help. He’s the patron saint of bakers, pawnbrokers, archers, sailors, and, of course, children. Wherever he goes, he reminds us to be considerate of those in need and thankful for our blessings even in hard times.

As 2021 comes to an end, another year in the grip of the deadly Coronavirus and one of sharpening political and economic divisions that seem to threaten not only the nation but also the world, regular working folks can look to some milestones that give encouragement for the year ahead.

Kellogg workers in Memphis and other cities ended their 77-day strike with a contract that got them cost-of-living raises and provisions to improve conditions for lower-tier workers. The 1,400 members of the Bakery (Thank you, Saint Nick, for those prayers!), Confectionery, Tobacco Workers and Grain Millers International Union (BCTGM) braved the cold weather and union-busting management to stand up for their rights and to proclaim their solidarity with all workers, whether rookie or veteran.

My former student, Jaz Brisack, was in the middle of another union fight way up north in Buffalo, New York, where workers at her Starbucks location voted for union representation, a first for the giant company. She was even featured in nationally televised reports about the historic victory. Jaz took seven courses that I taught at the University of Mississippi and went on to become a Rhodes Scholar and earn a master’s degree at Oxford University.

Workers across the land in 2021 showed new muscle as employers complained about labor shortages and blamed COVID-related government checks. “Help wanted” signs appeared on the front doors of many businesses. One benefit of the pandemic has been a new awareness of worker rights, a demand for better wages and working conditions, and the benefits of a real home and family life away from the workplace. Strikes, walkouts, and protests have been the proof of that new awareness.

Far to the south in Chile, the country where the CIA helped engineer a right-wing coup back in the 1970s that sunk it into the brutal dictatorship of Augusto Pinochet, voters elected this week progressive presidential candidate Gabriel Boric with a 56 percent majority. Only 36, Boric gained fame a decade ago as a student protester. He’s a supporter of women’s rights and gives hope to the nation’s long-ignored poor.

Of course, it’s not all roses in the land as 2022 approaches. Mainstream U.S. media continue to ignore the dismal treatment of WikiLeaks publisher Julian Assange even as they decry anti-press actions in Vladimir Putin’s Russia. U.S. Senator Joe Manchin threatens to destroy the Biden presidency to keep his corporate financiers happy.  Donald Trump continues to cast a dark and threatening shadow across the nation’s political future.

Old Saint Nick knew hard times himself. During his life, he suffered during the rule of Roman emperor Diocletian. What’s important, however, is to remember that the message he sends us is not only one of thanksgiving but also hope.

Posted by Joseph B. Atkins at 8:08 AM No comments: