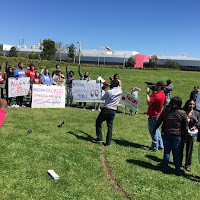 CANTON, Miss. - Students and activists marched past the front door of the main office of Nissan’s mile-long plant here Saturday chanting a modern-day version of Florence Reese’s Great Depression-era labor anthem, “Which Side Are You On?”

“Which side are you on?” began the call-and-response by students from the University of Mississippi, Tougaloo College, and Jackson State University. “On the people’s side!” they shouted.

The rally by 30 or more students and veteran activists aimed to bring attention to poor working conditions within the 5,000-plus employee plant, which has resisted a decade-long unionization effort by the United Auto Workers and a growing grassroots organization of workers, ministers, civil rights-era veterans, and college students.

“Students have always been the cornerstone of any movement,” said Michelle Wheatley, a senior at Tougaloo College. “We ask students to take a stand. To have Ole Miss here means a lot.”

Prior to the Saturday rally, pro-labor student activists came primarily from historically black colleges and universities like Tougaloo College and Jackson State University, both in the Jackson, Miss., area. On Saturday, a half-dozen or more students from the state’s flagship university, the University of Mississippi, joined them. An estimated 80 percent of Nissan’s workers in Canton are African American. 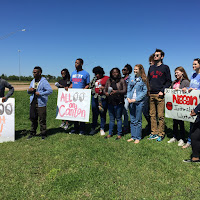 (To the right, University of Mississippi students join Saturday's protest)

“When you have a company that’s exploiting its workers, that company needs to be held accountable,” said Buka Okoye, who heads the NAACP chapter at the University of Mississippi. “When we speak against oppression, we speak against exploitation in general.”

“The labor movement is not dead! Unions are not dead!” said Dominique Scott, who heads Local 121 of Students Against Social Injustice at the University of Mississippi. “It’s important that we students acknowledge the power that we have and be in solidarity with workers.”

Former Mississippi Rep. Jim Evans, also a veteran labor organizer, said student solidarity with workers is very important. Nissan needs to “live up to its promises” and make good on taxpayers’ huge investment in bringing the company to Mississippi by allowing workers “to have respect and a voice at work,” Evans said.

Sources say that a union vote at the Canton plant is likely to take place within the next three months.

Although Nissan workers earn comparatively good wages for Mississippi workers, they have complained of harassment and poor medical treatment of workers injured on the job, the hiring of temporary workers (estimated at up to 50 percent of the workforce) at lower pay and minimal benefits, and punitive actions against those who express pro-union sympathies. Workers and activists say that the company showed employees at the Canton plant an anti-union video as recently as last month.

United Students Against Sweatshops, the Mississippi Student Justice Alliance, Young Democrats of America, and students activists and organizers with the national AFL-CIO in Washington were among the groups organizing the rally, the latest in a series of events in Canton and around the world challenging Nissan’s anti-union policies in the U.S. South.

A UAW delegation left for Paris, France, Saturday to meet with French parliamentary members about Nissan’s anti-union stand in Mississippi. Nissan workers are represented by unions at company plants around the world. Yet the company has joined other foreign-owned automobile manufacturers in resisting unions in the U.S. South. The French government owns nearly a fifth of the shares in Nissan stock with double-voting rights and thus has significant power to influence company actions.