Bernie Sanders' plan to bring back real journalism. We're sure not getting much of it in the mainstream corporate media

I’m an old reporter who began his career in the 1970s banging away at a typewriter, pasting the sheets of my copy together, and handing it over to a white-haired copy editor whose red ink marker never missed a comma splice or misspelled word. Even before I could articulate it, I felt an allegiance to the working stiff, the little guy who got pushed around, not the fat cats who hung out with my publisher at the country club. In other words, I was a typical reporter.

I made mistakes. I once wrote an obituary for someone who hadn’t died. A frail, wizened man came in the next day to clear up the confusion. It was his similarly named brother who had died, not him. The old fella was nice about it--and I don't know if it was my or the funeral home's mistake--but my editor's eyes were shooting poisoned darts at me from the other end of the newsroom.

Somehow I survived that fiasco to go on to a career that brought me to Washington, D.C., as a congressional correspondent, my national news service’s chief reporter covering the entire U.S. South, and later my three-decades career teaching journalism at a major Southern university.

So why is it today I can hardly read a newspaper or watch the news on TV without wincing? What has become of my craft? Sure, Fox News has always been a propaganda machine for the GOP and now Donald Trump. That’s what you expect. I used to go to MSNBC for fresh air.  Rachel Maddow seemed to bring a steely eye to the issues of the day. No more. I can no longer watch her or MSNBC. Eight million “Russiagate” stories killed that for me. If Russians were behind exposing the Democratic Party’s insider efforts to skewer Bernie Sanders’ campaign chances in favor of Hillary Clinton four years ago, then good for the Russians! I’m glad somebody exposed that rotten deal. Besides, Rachel, what about Yemen and Saudi Arabia’s destructive U.S.-aided war against that nation? What about the continued corporatization of American life and politics, Rachel? What about the saddling of an entire generation of Americans with lifelong student debt to feed Wall Street’s bottomless greed? There are other issues, Rachel!

Now we have U.S. House Democrats pursuing the impeachment of President Trump for using his office to try to get the Ukrainians to investigate Joe Biden’s son Hunter and his involvement with the Burisma Group gas company in that nation. I don’t like Trump. I’d like to see him impeached for a variety of reasons, but I’d also like to know more about what the hell Hunter Biden did to get himself into a top dog position with a Ukrainian gas company. What’s the real deal  with that, and how was the Biden name going to help that company? What favors could it expect from Washington? What I hear on most reports—print or broadcast—is a quick dismissal of any corruption evidence without really checking whether there is or not.

Thank goodness for alternative media and feisty (if I do say so myself) little online publications like Labor South that challenge the existential malaise that has the rest of U.S. media in a credibility tailspin. 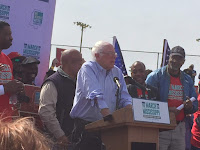 Good ol’ Bernie Sanders (to the left). The Democratic Party and corporate media may not like you, but you’ve got some darned good ideas, including ideas about how to reform media. He laid out a few in an op-ed piece in the New York Times back in August. Let’s review them. A Sanders Administration would do the following:

-       - Make future media mergers more difficult and impose a moratorium on them until their effects are clearly understood.
-       - Require major media corporations to disclose whether mergers will cause significant layoffs.
-       - Give employees the opportunity to purchase media outlets through employee stock ownership plans.
-       - Get a new FCC board that’s not bought-and-paid-for by the industry.
-       - Limit the number of stations broadcast giants can own in each market and nationwide.
-       - Work to strengthen labor rights and union rights at media organizations.
-       - Enforce antitrust laws to prevent “hedge fund vultures” and corporate conglomerates from cannibalizing news organizations.
-       - Increase funding for programs that support local public media news operations.

At my university, I teach media history, and we just finished the chapter on the “muckrakers” at the beginning of the 20th century, folks like Lincoln Steffens, Ida Tarbell, Upton Sinclair, Ray Stannard Baker. More than a century ago, they were taking on the corporate moguls, city machines, racist landowners, and, above all, the system, and they changed America for the better. They’re all smiling at you from heaven, Bernie.

Posted by Joseph B. Atkins at 3:23 PM No comments: