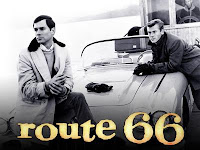 (To the right, George Maharis as Buzz and Martin Milner as Tod in Route 66)

I was just 12 years old when the idea of a Route 66 first entered my impressionable mind. It was the fall of 1960, and I was sitting on the floor in front of our television as Nelson Riddle’s jazzy moving-down-the-road theme first filled the room and the screen filled with Tod and Buzz making their across America in Tod’s Corvette.

Nothing, to me, was better than the CBS series Route 66, and I was a happy soul the other day when my complete DVD set of all four seasons by the Shout! Factory arrived. This was “the iconic television series of the 1960s,” writes Nat Segaloff in his biography of screenwriter Stirling Silliphant, whose hip, existential, Zen-like scripts made the show television’s own crossroads between 1950s Beat and late ‘60s Hip.

This was a series that put Yale-educated Tod Stiles, played by Martin Milner, and Hell’s Kitchen survivor Buzz Murdock, played by George Maharis, on the road every week “looking not for adventure but … for meaning,” journalist Michael Ventura has written. “Route 66 was not a television show, it was a promise. A weekly training film. A way out and through and over.”

Tod and Buzz traveled America, that vast, story-rich landscape many New Yorkers and Angelenos dismiss as the “flyover”. They went down the same road Woody Guthrie hitchhiked with his guitar, the same road John Steinbeck’s Okies in The Grapes of Wrath traveled in the Great Depression, the same road yours truly hitchhiked in 1969 and wrote about in a 2009 short story Alfred Hitchcock Mystery Magazine liked enough to submit for an Edgar Award. 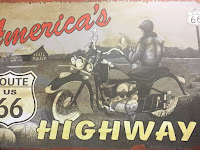 This was a working class show. Every week Tod and Buzz would roll their sleeves up to do a job on an oil rig or in a chicken farm or on a shrimp boat. A favorite character actor would usually join them—Keenan Wynn, Janice Rule, Susan Oliver, Robert Duvall, Whit Bissell, Martin Balsam, Nina Foch, Mike Yellin, Lois Nettleton. Occasionally a Sam Peckinpah or Robert Altman would direct. Silliphant’s magic pen, also seen in the earlier landmark TV series Naked City, made sure that plot didn't overrule character and also that the show always had something to say.

The pilot for the series took place way off Route 66 in Mississippi, where a local boss played by Everett Sloan rules his town like a little Mussolini. Another early segment puts Tod and Buzz on a shrimp boat at Grand Isle, Louisiana, where Charlotte Duval, played by Janice Rule, proves herself in a man’s world by saving her suitor’s boat during a hurricane.

Back in those days, the network execs gave Silliphant and producer Bert Leonard total control, a kind of artist’s paradise. Silliphant hit the highway ahead of cast and crew for the on location filming, staying in hotels and motels along “the mother road,” checking out the local hangouts and talking with folks about local stories and legends.

When the gig finally was up—Maharis left halfway through the third season, replaced by Glenn Corbett, and the show never quite recovered—and the last segment aired on March 13, 1964, the execs decided they’d allowed all the artistic license they could stand. “Before long, network executives whose hands-on experience had been limited to changing the channel were demanding to approve not just finished teleplays but story ideas, casting, locations, production crew, and even the costumes and wallpaper,” Segaloff writes. “Focus groups replaced intuition and experience.”

Hardly any life after life followed the end of the road for Route 66. Original negatives were hard to find. Lawyers and corporations tied up opportunities to show it to a new generation. When Shout! Factory came out with the DVD collection in 2012, the media paid little or no attention. “Route 66 represents something of an evolutionary dead end for the TV drama,” writes Todd VanDerWerff. “It was an attempt to blend the closed-off, social-issues-based storytelling of the best anthology series with the recurring characters of a more traditional drama series. It’s an approach that still works in other countries—Doctor Who springs to mind—but has more or less died out in the U.S.”

The show’s fate has been similar to the road that gave it its name. Route 66 was named one of the nation’s most endangered historic places in 2018, a victim both of development and neglect.

What television viewers saw in Route 66 was an “embrace of an American counterculture that was slowly moving into the mainstream eye,” VanDerWerff writes. “Characters on Route 66 did drugs or agitated for political positions that would have been seen as far left even a decade prior.” In other words, Route 66 was shaking things up years before the Sixties became the Sixties. Maybe that’s one reason my 12-year-old self liked it so much.