Former SNCC leader Bob Zellner and labor organizers Richard Bensinger and Rose Turner talk about "The Future of Labor" at University of Mississippi campus: Grassroots organizing can overcome both fear and "right to work" laws 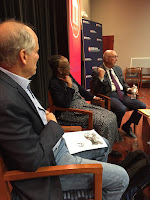 Civil Rights Movement SNCC leader and social activist Bob Zellner joined veteran labor organizers Richard Bensinger and Rose Turner last Friday for a panel discussion of “The Future of Labor” at the University of Mississippi’s Overby Center. A central point in their discussion was that grassroots organizing can overcome "right to work" laws as well as anti-labor forces' greatest weapon: fear.

Sponsored by the campus Radical South organization, which seeks through panel discussions and other events in April to provide an alternative view of the South from that of conservative politicians like Mississippi Gov. Phil Bryant, the panel offered a lively discussion on the status of labor today in the South and across the nation.

Bensinger, a top national labor organizer who helped coordinate the United Auto Workers’ recent campaign at the Nissan plant in Canton, Mississippi, and other auto campaigns in the South, said “right to work” laws across the region aren’t a good thing but also shouldn’t “stand in the way” of a successful campaign. Bensinger co-founded the Institute for Employee Choice, establishing organizing principles for both employers and unions to follow during union campaigns. He advises unions on organizing and experimental organizing strategies in the service sector.

Turner, who led the successful and historic catfish workers strike in the Mississippi Delta in 1990 and has continued to work with catfish and nursing home workers in the region ever since, said organizers “have to organize” and get down to the grassroots level with workers. Turner currently serves as organizing director and executive assistant to the president of the United Food and Commercial Workers Local 1529, based in Memphis.

Zellner, who fought side by side with Martin Luther King Jr., Rosa Parks, John Lewis, Stokely Carmichael and other civil rights leaders during what he calls “The Second Emancipation” of the 1960s, said fear was the great weapon anti-civil rights forces used back then and it is the same weapon anti-labor forces use today. Zellner helped organize the Freedom Rides of 1961 and was the first white Southerner to serve as field secretary of the Student Nonviolent Coordinating Committee.  He continues to be active in the Poor People’s Campaign and the Moral Monday movement in North Carolina with the Rev William Barber.

Fear can be defeated at the workplace just like it was in the South back in the 1960s, the panelists agreed.

Labor South’s Joe Atkins moderated the panel discussion, which included topics ranging from the current teacher strikes and student protests against gun violence to how corporate money has compromised groups such as the NAACP in their support of labor campaigns such as the one at the Nissan plant in Canton.

(To the right, at Ajax restaurant in Oxford, from left to right, Joe Atkins, Bob Zellner, pro-UAW workers from the Nissan plant in Canton, Mississippi, Richard Bensinger and his activist wife Virginia Diamond) 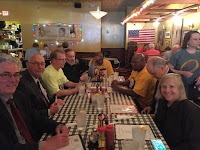 The panelists’ visit to Oxford, Mississippi, featured dinner and lunch the next day on the city’s famous Square as well as opportunities to sing labor songs such as “I Dreamed I Saw Joe Hill Last Night” and “Union Maids” with fire-breathing, labor organizing, Truman Scholar-winning University of Mississippi student Jaz Brisack. Also joining the group for lunch were several Nissan workers who had campaigned for UAW membership at the Canton plant.

OXFORD, Miss. – The great writer and champion of social justice Dorothy Day once said that “fighting for a cause is part of the zest of life.”

She didn’t stop there. “What we need is a revolution. Each one of us can help start it.” A lifelong pacifist, Day wanted a “revolution” that would “build a new society within the shell of the old,” borrowing a slogan from the “Wobblies” in the turn-of-the-century Industrial Workers of the World union.

I remember doing a lot of “fighting for a cause” in my salad days—and later. I shouted, chanted, carried signs, sat in, demanded, wrote letters, and argued and plotted endlessly into the night with my fellow “revolutionaries”—whether the cause was civil rights, Vietnam or worker rights.

That’s why it gladdened my heart when I saw young people across the land—including students of mine like Jaz Brisack--marching and demanding an end to politically sanctioned gun lawlessness in the recent “March for Our Lives” in Washington, D.C., here in Oxford and Jackson, Mississippi, and across the nation.

“We’re not children anymore. We’re warriors,” 16-year-old Oxford High School junior Anna Claire Franklin told the University of Mississippi’s Daily Mississippian. The students are “letting our lawmakers on a state and national level know that the upcoming generations … won’t stand by and allow the ease of buying firearms to be prioritized over the safety of our nation’s students.”

How ironic that the protests took place as Mississippi legislators gave strong support to a bill allowing guns on college campuses. The protests have led to greater gun restrictions in Florida, where the deaths of 17 young people at Majory Stoneman Douglas High School in Parkland February 14 prompted the national outrage against the political bullying of the National Rifle Association.

Also tickling this old revolutionary’s heart are the massive protests by school teachers in West Virginia and Kentucky that have challenged the Koch Brothers and American Legislative Exchange Council-led effort to destroy public education by starving it of funds so that privately run charter schools can take its place.

That nine-day wildcat West Virginia teachers strike forced the state’s billionaire governor and GOP-led legislature to cough up a 5 percent pay hike for all state employees although the politicians planted enough poison in the deal to make sure teachers get blamed for cutbacks in Medicaid and other services.

Kentucky teachers followed suit this month, marching out of their classrooms en masse after state GOP political leaders proposed cutting their benefits. Under pressure, the Republicans dropped their plan although some cuts still loom on the horizon.

Mississippi’s Republican leadership, like their counterparts in Kentucky and West Virginia, get their cues from the Koch Brothers and ALEX on public education just as they do on a host of other issues. They’ll never admit it, but the end of public education is their goal.

So should Mississippi teachers go on strike?

Well, I covered the last major strike by Mississippi school teachers back in 1985. Thousands of teachers across the state marched on Jackson during the 11-week strike, and they finally got the Legislature to agree to a $4,400-over-three-years pay increase. However, it came with a provision that they would never strike again. If they do, they could lose their licenses and their teacher organizations could face fines of up to $20,000 a day.

But, you know, those teachers in West Virginia and Kentucky faced risks, too, just as students protesting against NRA gun lawlessness have already come under attack from right-wing political groups.

When people get fed up enough to go to the streets, they take risks. They know there may “be a price to pay,” Dorothy Day wrote, “sometimes a heartbreaking price. … Neither revolutions nor faith is won without keen suffering.

A shorter version of this column ran recently in the Jackson Free Press in Jackson, Mississippi.