The passing of Hazel Dickens, and the ongoing grand tradition of the music of the people 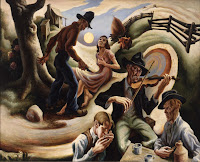 (The painting you see is Thomas Hart Benton's 1934 The Ballad of the Jealous Lover of Lone Green Valley, which is located in the University of Kansas Spencer Museum of Art in Lawrence, Kansas.)

I remember the first time I heard Hazel Dickens sing her classic Black Lung and thinking how rare it is you hear such raw, honest emotion in a song. It's a song that's primitive, like honesty often is, and angry and full of good old righteous indignation at social injustice.

"He went to the boss man, but he closed the door," she sings about the worn-out coal miner who's the subject of her song. "It seems you're not wanted when you're sick and you're poor." Later, after that coal miner dies, the boss man shows up "with his little bunch of flowers." To that, she says, "take back those flowers. ... The die has been cast."

Dickens died April 22, another milestone in the rich history of people's music in this country. A lot of people may have never heard of her. One of a family of thirteen who lived in a three-room shack in Montcalm, West Virginia, she was a living link to singers like Ella May Wiggins, the labor minstrel during the Depression-era textile strikes in North Carolina who was shot to death by anti-labor goons. The last words of the 29-year-old mother of five were: "Lord a-mercy, they done shot and killed me." Her murderers were never brought to justice.

This is the real America, the one beneath the shiny veneer the Wall Street public relations types put out there.

It's a tradition goes at least back to John Henry, and it's one that should be taught be in schools. Did you learn about it when you went to school? I doubt it. There's about as much chance of that as there was you got a scintillating lesson on what happened at Haymarket Square in Chicago in 1886.

How rich is this tradition? Listen to Sarah Ogan's Come All You Coal Miners from 1944. The first time I heard that song I wondered, "How in the world did she get away with that?" Talk about class consciousness in the Southern working class. Listen to her lyrics:

Coal miner, won't you wake up and open your eyes and see
What the dirty capitalist system is doing to you and me.

Of course, the tradition includes Florence Reece and her Which Side Are You On?, the anthem of labor protest that has reached far beyond the coal mine industry injustice that inspired it. Like Dickens and Ogan, Reece knew whereof she sang. She was the wife of a coal-mining labor organizer who was hunted by Sheriff J.H. Blair's thugs.

Better known are Woody Guthrie, Joe Hill, and their many labor songs. They're all part of an international tradition that goes back to the French Revolution's La Marseillaise and the Paris Commune's L'Internationale. When the Polish shipyard workers created the anti-Soviet, freedom-seeking Solidarity movement in the 1980s, their minstrel was Jacek Kaczmarski, the Bob Dylan of Poland, a poet as much as a musician.

One of my prize possessions is a rendition of the immigrant song "De Colores" by Baldemar Velasquez and Aguila Negra, itself an anthem for Latino workers in this country.

All forms of music have had their rebels who composed, sang, and performed on behalf of the people--Beethoven and Mussorgsky in classical music, Kurt Weill in popular opera, Charlie Haden in jazz, Jimmy Reed's Big Boss Man in the blues, Steve Earle in country music, Rage Against the Machine in rock. These are some who come to mind, but the list is too long to include all.

This is the tradition Hazel Dickens represented. Too bad you didn't read this in your newspaper or see and hear it on the TV and radio news.
Posted by Joseph B. Atkins at 7:07 PM