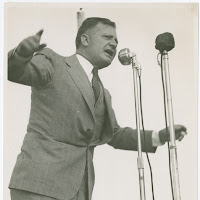 (To the left you see a photograph of Earl K. Long on the stump, provided with permission from the Leon Trice Political Photographs Collection, Louisiana Research Collection, Tulane University. You can check out the collection online.)

“Uncle” Earl K. Long, three-time governor of Louisiana and premier Southern prophet and philosopher, once gave a speech in Alexandria, La., that blasted the “fiscal conservatives” of his day who ranted and raved about too much government and high taxes at the same time they were stuffing the people’s money into the pockets of the rich.

“Some sapsuckers talk about cutting down taxes,” Earl bellowed to an approving crowd of thousands one hot day in 1959. “Where are they going to start cutting expenses? … On the little children, enjoying the school lunches? Or on those fine old people, white-haired against the sunset of life?”

Meanwhile, Earl said, the wealthy “sit there swallowing hundred-dollar bills like a bullfrog swallows minners—if you chunked them as many as they want they’d bust.”

Re-reading A.J. Liebling’s classic book, The Earl of Louisiana, recently gave me a new appreciation of Earl Long, and it made me realize how much the South and the nation are slipping back to the days that gave rise to Longism in Louisiana and populist revolts across the land, days when a handful of financiers and other Wall Street types controlled the legislatures and Congress while people struggled to survive on low wages, no benefits, and no protection from government.

Earl Long never met the billionaire Koch brothers, but he knew their kind, the behind-the-scenes backers of anti-union, corporate boardroom politicians like Wisconsin’s current Republican governor, Scott Walker, the man who pushed through $140 million in tax breaks for corporations and then went after public employee unions on the pretext of fixing his state’s failing budget.

Later, Walker’s colleague from Wisconsin, U.S. House Budget Committee Chairman Paul Ryan, R-Wis., got his fellow Republicans in the House to back a budget deal that finances a $4 trillion handout to corporations and the rich by cutting $6 trillion from programs like Medicare and Medicaid. Don’t doubt for a minute that Social Security is next on the GOP chopping block.

In other words, “those fine old people, white-haired against the sunset of life” get the shaft while Charles and David Koch get richer.

And what an inspiration Walker has been for his fellow Republicans in the South.

Georgia, the state that recently aped Arizona’s anti-immigrant, circle-the-wagons hysteria by cracking down on brown-skinned construction workers and field hands, has a state House-passed budget under consideration that slashes education funding at the same time it lowers income taxes for the rich. Florida and South Carolina are considering similar proposals.

Mississippi, the nation’s most conservative state according to some polls, continues to be an inspiration, too. Politicians in Virginia are hoping to embed the state’s anti-union “right-to-work” law in its constitution, much like Ol’ Ross Barnett was able to do here back in the early ‘60s.

Thank goodness, people are finally standing up to these assaults. Everyone knows about the 100,000 protesters who filled the state Capitol in Madison, Wis., during Walker’s attack on workers there. Other protests have followed in other states, including Southern states like Tennessee. Here in Mississippi, striking steelworkers with Omnova Solutions in Columbus recently marched to a shareholders’ meeting in Cleveland, Ohio, to protest a company that could give its CEO a 90 percent pay raise (to $3.5 million a year) at the same time it moved to strip seniority and other worker rights.

In the South, these clashes have given rise to some of the age-old issues that have always plagued the region. Some have questioned whether the GOP’s anti-public employee campaign might have a racial angle. Some 14.5 percent of public employees are black, and 23 percent of working black females are in public administration. The myth of the pampered, overpaid, underworked public employee isn’t that far removed from Ronald Reagan’s depiction of the “welfare queen.”

Race is another issue Uncle Earl would recognize. Too bad we don’t have him on the stump telling it like it is.
Posted by Joseph B. Atkins at 7:36 AM