Race & Immigrants on tap as issues in the 2012 presidential election 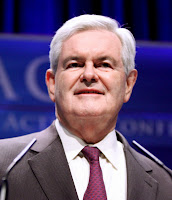 (To the right is a photograph of Newt Gingrich speaking at CPAC in Washington, D.C., on Feb. 10, 2011. The photograph is by Gage Skidmore)

Welcome to the opening act of the 2012 presidential election, an event guaranteed to inundate voters with an ocean of talk about the evils of government handouts, the hordes of immigrants who take our jobs and whose children threaten our schools, the president who may still be a foreigner despite that Hawaii birth certificate he recently produced.

And if that doesn’t work, surely there’ll be a gay marriage or two somewhere in the West to reignite those never-resolved fears of a homosexual takeover of the nation.

We all need distractions, don’t we? Is there a better time than a presidential election? We don’t want to have to think about some of the real issues that are out there—the 44 million Americans (one out of every seven) who live in poverty, the 50 million Americans either foreclosed out of their homes or facing possible foreclosure, the deepening divide between Wall Street and Main Street.

Let’s indeed not focus on what crusading journalist Robert Scheer calls the “Wall Street casino”, the bankers, investors, and speculators who created the “trillion dollars’ worth of toxic mortgage-based securities at the heart of the nation’s economic meltdown,” or their enablers in Washington—both Democrat and Republican—who’ve worked to take down the protective wall of regulation FDR established to prevent such disasters.

Former Georgia congressman and U.S. House Speaker Gingrich helped set the stage for the presidential election this month when he called it the most important since 1860 and derided Obama as a left-wing “food stamp president.” A year ago he criticized what he called Obama’s “Kenyan, anti-colonial behavior.” Please tell me: When did “anti-colonial” become a bad thing?

Gingrich went on to praise General Electric for paying no corporate taxes last year, and he endorsed the defunding of the National Labor Relations Board for ruling against Boeing’s effort to punish strikers at its plant in Washington state by setting up operations in South Carolina. Let’s see if he’ll campaign on getting rid of Medicare, like some of his fellow Republicans want to do.

On the same day Gingrich gave his speech at the Georgia Republican Party convention, Georgia Gov. Nathan Deal signed into law an Arizona-style anti-immigration bill that gives local law enforcement power to demand immigration papers from anyone they suspect to lack such papers. Those without papers will be jailed.

Two days later, rock musician Santana appeared before thousands at major league baseball’s annual “Civil Rights Game” and used the opportunity to blast the Georgia law. The crowd booed him loudly, but Santana held his ground and told them “you should be ashamed of yourself.” My response was to start humming Black Magic Woman with new appreciation.

Georgia, Alabama, and Florida are doing their best to get on the Arizona bandwagon, and it seems children are often the target. In the spirit of those Arizonans who’ve pushed to overturn the 14th Amendment to the Constitution and deny citizenship to Latino children born here to undocumented workers, the Alabama state Senate passed a law denying prom participation, the 4-H club, and other extracurricular activity to undocumented children.

It’s all a prelude to what’s to come. Politicians like Gingrich will base their campaigns on fear, on thinly veiled allusions to race, including Latinos, and the sense of “us against them.” Was this not the heart of the “birther” issue regarding Obama’s own citizenship, an effort to make the president someone who’s not one of “us”?

Polls show that 72 percent of Americans support sensible immigration reform, and most Americans don’t feel threatened or alarmed by the presence of immigrants in their midst unless politicians and the media stir up such feelings.
Posted by Joseph B. Atkins at 1:10 PM