Occupy Memphis: From lawyers to the homeless, a protest against the plutocracy

(To the right is the logo for the Occupy Wall Street movement that was created by Kalle Lasn and others. Lasn is a native of Estonia and resident of Canada who edits the magazine Adbusters.)

MEMPHIS - William Newton is a 59-year-old Memphis lawyer whose specialty is mortgage banking, corporate mergers and loan recovery. In the 1960s, he was a right-wing Barry Goldwater supporter and hawk on the Vietnam War who flunked his physical for the military.

Now he's a self-proclaimed "anarchist"--a hot-button term but one that he defines as calling for "no rulers," not "no rules." Newton believes "the political process is completely broken" and "the banks own both parties." That's why he is camping out across from City Hall in downtown Memphis as part of the Occupy Memphis protest. Approximately 40 protesters spend every night here. The group swells to as many as 80 on the weekends. When a march is called, their numbers top 120.

"I'm here because I couldn't (otherwise) live with myself," he said on the morning after Thanksgiving day, standing in front of a small village of blue, green and white Occupy Memphis tents near the trolley line on north Main Street. 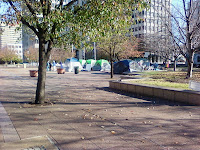 He pointed to City Hall across the street. "This is a police state we live in. They would treat us like Oakland if they could get away with it."

He referred to the hardline crackdown by police on "Occupy Wall Street" demonstrators in Oakland, Calif., and other cities.

Newton is one of the comparatively small-but-impressive army of "Occupy" protesters who are proving that the spirit of protest is alive and well in the South as well as in New York, Oakland and other cities and regions. "We are seniors, teachers, small business owners, clergy, and union members," proclaims The First Declaration of Occupy Memphis. "We are clerks, firefighters, nurses, police, and immigrants. We are service workers, veterans, entrepreneurs, students, and unemployed, and recipients of Social Security benefits."

They are also the homeless. "This is worldwide," said Donna Crawford, 59, an Arkansas native who has been homeless "off and on" every since her "first divorce" 10 years ago. "All these cutbacks. The ministries are not helping. I worked for them."

Crawford sees the protest in a very personal way. The richest nation in the world offers little to the marginalized, the poor, the ones who fall through the cracks. Homeless "women everywhere have nowhere to go," she said. 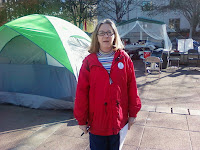 Occupy Memphis, like its counterparts around the country, denounces "the control of our government by the 1%. We the People have a right to govern ourselves; that right has been usurped by corporations, big banks, Wall Street, the Federal Reserve, and the wealthiest 1% of our population," the First Declaration says. "These elites put profit over people, self-interest over justice, and oppression over equality."

They're not people who simply need a bath, as Republican presidential contender and former Georgia congressman Newt Gingrich says.

Everything that comes out of Gingrich's mouth requires more than a few grains of salt. This is what he said back in 1995 about workers' compensation: "If you are not at work, why are we paying you? It's not called a vacation fund."

Who is more real in our world today? William Newton and Donna Crawford, or Newt Gingrich?

The time has come, as Martin Luther King Jr. once said, to "begin the shift from a thing-oriented society to a person-oriented society. When machines and computers, profit motives and property rights, are considered more important than people, the giant triplets of racism, extreme materialism, and militarism are incapable of being conquered."
Posted by Joseph B. Atkins at 5:42 PM