Occupiers in 2012: Continuing the fight for progress "from the bottom up"

Among the stacks of books, newspapers, and magazines that crowd my office is a collection of century-old editions of Populist Party leader Tom Watson’s The Jeffersonian. What caught my eye as I recently browsed through them were artist Robert Carter’s drawings on pages 4 and 5 of the Jan. 9, 1908, edition.

On page 4 was a gathering of well-dressed, big city New Year’s Eve revelers—top hats, glowing gowns, expensive furs, happy smiles—under the caption “The Wine Line” and with this description: “While Caruso sang the `Chime Song’ at the Plaza, and the great ones of society clinked glasses … something very different was going on at the back door.”

The “back door” scene was on page 5 under the caption “The Bread Line”. Here a bedraggled gathering of women, children, and old men, faces down-turned, their clothes ragged, waited patiently. “At nearly all the restaurants the unfortunate straggled and shivered waiting for 1 o’clock, when the passing out of the free bread and coffee would begin,” read the description.

Watson’s Atlanta-based weekly was one long critique of the excesses of “the captains of finance on Wall Street” and the equivalent of what we’d call today the “1 percent”. At its heart, before it disintegrated into racism and bogus monetary issues, the Populist movement was a stirring precursor to the Occupy Wall Street movement and the strongest challenge in the nation’s history to our Wall Street-beholden two-party system.

As the year 2012 looms, the protest that began in September against the “captains of finance” who nearly destroyed the nation’s economy in 2008 promises to continue to shape the political dialogue in a crucial election year and steal some of the thunder from the corporate-sponsored Tea Party movement.

“I’m here because the political process is completely broken,” Occupy Memphis protester William Newton told me one chilly morning recently. “The banks own both parties. We have a small presence here, but we are the nucleus of the next step.” 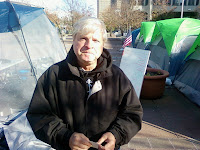 An attorney with a background in mortgage banking and specialty in corporate mergers, Newton, 59, is a former “hawk” and “Goldwater supporter” who has seen the modern-day corporate world from the inside and didn’t like what he saw. “Our country has been high-jacked. I’m here because I couldn’t live with myself otherwise.”

The validity of Occupier complaints has been confirmed in several recent studies.

According to the non-partisan Congressional Budget Office, the top 1 percent of the population (in wealth) has seen its income grow 275 percent since Ronald Reagan first took office. As for the rest of us, our income grew less than 40 percent. But the wealthy do give. For example, they contribute $7 to every $1 small donors give to political campaigns, a 2010 study by Common Cause showed.

No wonder two-thirds of the nation believe wealth should be re-distributed to make it more fair, support higher income taxes on the wealthy, and oppose tax cuts for corporations, according to a New York Times/CBS News poll in October. Seven in 10 say Republicans in Congress primarily support the rich.

Yet you won’t get much of a feel for the growing class resentment in this nation from Fox News. It took what writer David Love called the “Bull Connor” tactics of the police in New York, Oakland, and other cities against Occupy protesters even to get mainstream media’s attention to the movement.

With his fiery, populist-sounding speech in Osawatomie, Kansas, in early December, President Obama indicated that he is now ready to take on the true powers-that-be in this nation and fight tooth-and-nail for the little guy. However, the continuing presence of Wall Street insiders like Treasury Secretary Timothy Geitner in the president’s inner circle, the legacy of his many concessions to congressional Republicans, and his projected $1 billion campaign kitty can’t help but breed a certain amount of skepticism.

Even progressive politicians spend “most of (their) time on the phone asking rich guys for money,” musician, Rage Against the Machine member, and activist Tom Morello told The Progressive magazine recently. “I’ve never been a fan of waiting around for some President or Supreme Court panel to wave a magic wand and set things right.”

Progress comes from the bottom up, Morello said, not the top down. William Newton knows this. That’s why he’s “occupying” Memphis and preparing for “the next step.”
Posted by Joseph B. Atkins at 9:00 AM