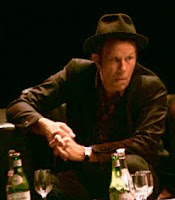 (To the left is Tom Waits during an interview in Buenos Aires, Argentina, in 2007. Photo from Theplatypus)

I’m going through a real Tom Waits phase right now. A belated discovery for me, Waits is one of our geniuses. The great storyteller, musician, performer, actor, and man of the times, who has waged holy war against major corporations that tried to appropriate his music for their advertisements, has some good advice for the social movement taking shape in this country and around the world: “You gotta get behind the mule in the morning and plow.”

(Check out Tom Waits' amazing 2008 performance of "Get Behind the Mule" in Atlanta on YouTube. Tried to link it but no luck)

And that’s exactly what a lot of folks are doing, plowing for their rights, whether it’s “Occupy” sites around the country or in Southern towns like Greenville, N.C., home of my alma mater, East Carolina University. An old tobacco town in North Carolina’s poorest region, Greenville is where the lowest of the low-paid, sanitation workers, have taken a stand in their fight for better pay and conditions.

“Just because we pick up garbage doesn’t mean we have to be treated like it,” says nine-year-veteran sanitation worker Harold Barnes in a recent online letter from the United Electrical, Radio and Machine Workers of America (UE). “We are all grown men, not children, and this is the day we decided we are going to stand up for what we actually believe in.”

Barnes and other sanitation workers began an occupation of their workplace on November 9 that forced the city to sit down and bargain with them. The work action was inspired by training conducted by UE’s Research & Education Fund (UEREF) and its Southern Workers International Justice Campaign (SWIJC).

A key issue for SWIJC and UE is the collective bargaining rights denied public employees in North Carolina, Virginia and West Virginia.

“The ban on collective bargaining in the public sector has led to the unmistakable prevalence of widespread race and sex discrimination in the workplace … as well as racial and sexual harassment,” proclaimed the International Labor Organization of the United Nations in 2007.

In Greenville, according to the UE letter, SWIJC “helped the workers connect with community allies and city council members, organize themselves democratically and talk with the media. Their actions forced city management to meet and negotiate over their issues and ensured that no one suffered retaliation despite the fact that strikes by public employees are illegal in North Carolina.”

Despite what writer David A. Love recently called “Bull Connor” tactics by police in various cities to quell the “Occupy” protests, the movement is growing and taking on a deeper resonance. Labor writer David Bacon says the movement is embracing the “planton tradition” of protest in places like Mexico, El Salvador and the Philippines, where workers and strikers are “living at the gates of the factory or enterprise where they work.”

Bacon says “each planton is a visible piece of a movement or organization—a much larger base” that includes “unions, students, farmers, indigenous organizations and other social movements.”

UE is a legendary militant union with a proud tradition, having survived ostracism during the McCarthy era and gone on to be at the forefront today in the building of a truly international labor movement. This year marks the 75th anniversary of UE’s soldiering for social justice.

Truly an international movement is underway. Witness the recent walkout by 7,000 workers at the Yucheng factory near Dongguan in southeastern China. They are protesting the Taiwanese owners’ recent dismissal of 18 section managers, new rules that eliminated worker bonuses, and plans for a possible relocation.

On Nov. 23, 1,000 workers at a Guangdong factory that makes keyboards for Apple and IBM went on strike to protest overtime policies that required workers to work as late as 2 a.m. in addition to their regular shifts. According to China Labor Watch, workers sometimes put in as many as 120 hours overtime a month at the factory. Even so, the factory has managed to avoid paying legally required double (overtime) wages by forbidding the workers to work on Saturdays.

The Economist reported in its Oct. 29 edition that rural migrant workers within China are growing increasingly angry at companies that withhold pay when the companies get short of cash. Even though the government has passed a law forbidding financially viable companies from doing so, “this has done little to protect the more than 150 million rural migrants who perform most of the country’s manual labor,” the magazine reported.

Workers and activists around the world are indeed getting “behind the mule” and plowing hard for their rights these days. Organizations like the UE should be praised for helping these workers see that theirs is a global fight that needs global solidarity.
Posted by Joseph B. Atkins at 11:40 AM