(In this modern world where the ideology of neoliberalism has replaced the "old-fashioned" ideas of Karl Marx and Adam Smith, we have Marx on the left (from a Chicago Tribune interview in 1878) looking to the right, and we have Adam Smith on the right below looking to the left. Maybe both would say today, "What happened?") 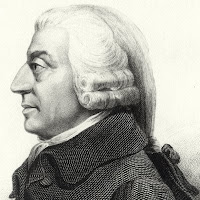 I'll soon be filing a report from my recent trip to Chicago, where I participated in the Working-Class Studies Association 2011 conference and presented a paper titled An Under-the-Radar Labor Movement Taking Root in the Global South.

This paper, which I'm converting into a magazine piece, details some of the work that is going around the Global South, including the U.S. South, on behalf of migrant workers and other workers at the bottom of the supply chain in today's neoliberal economy. In the U.S. South, the Farm Labor Organizing Commmittee, Coalition of Immokalee Workers, Mississippi Immigrants Rights Alliance, and other groups are making headway against enormous odds, forcing mega-corporations to pay attention and act to preserve a good corporate image. This blog has tracked many of these efforts, which get little attention in mainstream media.

However, similar actions are taking place around the world, particularly Asia, that region where the once-Southern textile industry now resides and where the lowest wage workers on the globe are rising up and asserting their rights. Just one example is the Asia Floor Wage Alliance, a grassroots movement founded in India to establish a pan-Asia minimum wage for garment workers. The alliance now claims member organizations from 11 Asian nations as well as from the United States and Europe.

This blog has already reported on groups within the Migrant Empowerment Network in Taiwan (MENT) and on the Transient Workers Count Too (TWC2) in Singapore and their successful efforts to get government involved on behalf of "the least of people," to use the words of Father Peter Nguyen Hung Cuong of Bade City, Taiwan.

More will be coming. However, to understand the challenge these groups and their under-the-radar movement face one must understand neoliberalism, the true religion of modern-day global capitalists, the mantras of which politicians ranging from Ronald Reagan, Margaret Thatcher, Bill Clinton, George W. Bush, and Tony Blair, to, yes, it sadly appears, Barack Obama have chanted and are chanting with the passion that only high-dollar campaign contributions can inspire.

What this religion preaches is free trade, the free, unfettered flow of capital to promote investment, and ultimately the accumulation of yet more wealth by its practitioners. What it depends on, however, are the same peasants who provided the backbreaking labor to build the infrastructure for the mercantilism that Adam Smith so despised, those docile peasants whose cheap labor enables the vast accumulation of wealth of the few.

Yes, neoliberalism reaches beyond the old ideologies of Smith and Marx in its utter sanctification of greed, and that's why you have the leaders of the world's largest communist country, China, embracing it enthusiastically.

But read about neoliberalism from someone much more astute that this writer. Very informative is Anup Shah's essay A Primer on Neoliberalism, which I've now linked to this page. Here is the link as written: http://www.globalissues.org/article/39/a-primer-on-neoliberalism.
Posted by Joseph B. Atkins at 1:48 PM