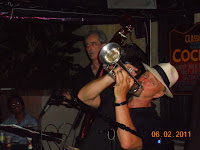 (To the right you see a photo of Steamboat Willie playing his horn at the Cafe Beignet on Bourbon Street. The photo was taken by my wife Suzanne Centenio Atkins.)

Here's a little July 4 feature about a hard-working jazzman in New Orleans.

NEW ORLEANS – When the goateed man in the Panama hat puts his trumpet to his lips and plays Do You Know What It Means to Miss New Orleans, you know he knows. You hear it in every note--when he plays and when he sings. You miss it, he tells you, “because that’s where you left your heart.”

I never go to this city without stopping at the Café Beignet in Music Legends Park on Bourbon Street, where, just beyond the statues of Pete Fountain, Al Hirt and Fats Domino, Steamboat Willie performs every night. Check out this link: http://www.youtube.com/watch?v=B0trKp_3SEQ

On Bourbon Street, it can be hard to find the music that made this city famous. Along the daiquiri bars and strip joints you’re more likely to hear electric blues, rock, and Memphis soul. What Steamboat Willie gives you is in the song.

the moss-covered vines, those tall sugar pines
… that lazy Mississippi … that moonlight on that ol’ bayou

“I’m in a lovely little park, with children, people in wheel chairs, people who might want a cup of coffee, not necessarily a drink, little children dancing in front of my stage,” Steamboat says about his nightly gig. “The music is as lovely as we can make it. … I am doing what I’m supposed to be doing. I am in the right place. God gave me something that I could do, and I am giving from the heart.”

It was a long, convoluted path that led the 60-year-old East St. Louis, Ill., native to Music Legends Park, however, and even after he got there, he almost lost it all. It’s a story worth telling.

Born Larry Stoops “on the poor side of the tracks,” he was the son of a mechanic and a homemaker. He learned to sing and play in the Pentecostal Church. “I was eight when I started playing. My brother had a cornet in the house. We just taught ourselves how to play.” As for singing: “my two sisters put me on a slab porch and wouldn’t let me off till I sang harmony.”

With the $50 Nash Rambler his father bought him—on condition that he himself re-build the motor—he took off to Tupelo, Miss., to study at the Pentecostal Bible Institute. He sold Kirby vacuum sweepers and worked at a local Big Star Grocery for $1 an hour to put himself through school. His first job after graduation was selling Bibles.

Married at 20, he got a post as an assistant pastor in Maine but “just couldn’t make it,” he says. “I couldn’t make enough money to feed myself or my wife. One day I got a six-pack of beer, called the pastor, and let them know I quit. I didn’t even drink. They bought me a bus ticket … and sent me back to Illinois.”

Then God gave him a cornet. “I was making car seats and coming out of the office when this lady put a cornet in my hands and said, `I can’t play it. You keep it.’” He took the instrument and one night sat in with a jazz band at a country club in St. Louis. That was his start. Eventually he found his way to New Orleans, picking up his nickname “Steamboat Willie” during a gig in Biloxi, and he figured he never leave the Big Easy—at least until 2005 when Hurricane Katrina sent him on an itinerant journey from Texas to Virginia, New York, Massachusetts, and Oregon.

“A nightmarish situation,” he recalls. “You don’t want to talk about it too much. Every time you look on the news and see water on top of everything, to realize that your life has ended and you don’t know if it is ever going to come back. I cried a lot. I still cry sometime.”

The stress from Katrina eventually contributed to a heart condition that might have killed him if he hadn’t met Dr. Sam Fillingane, a Jackson, Miss., physician who treats cardio-vascular illnesses. “He nursed me and got me back” to good health, Steamboat says.

“Steamboat’s a good fella,” Fillingane says about his former patient. “Let’s keep him tooting that horn.”

That’s what Steamboat plans to do. “I want to use my music to help children, or (treat) cancer … doing something in a bigger way, so that when I lay down to die, I feel I’ve done something that God wanted me to do. That’s my goal in life.”
Posted by Joseph B. Atkins at 7:18 AM