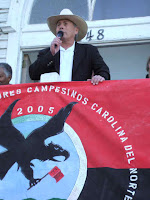 Last summer Farm Labor Organizing Committee activist Diego Reyes Jr. told me he was hopeful about the future for migrant labor in North Carolina and elsewhere in the South despite all the odds. "I believe there is going to be a change," he said. "That's where change begins."

Reyes' faith in the future may be justified. FLOC scored another in a long line of victories for migrant workers in May when tobacco giant Reynolds American announced it would meet with FLOC and other groups in an effort to assess working conditions in the fields. The agreement was a milestone in a three-year effort by FLOC to get Reynolds to take action.

FLOC officials said they plan to make sure the company lives up to its agreement to look for abuse in its supply chain and to work with FLOC and other groups. "While this is a vindication of the past three years of struggle, the campaign will continue until real progress is made," FLOC officials said in a statement.

Statistics from FLOC and the National Farm Worker Ministry indicate that 24 percent of tobacco pickers (traditionally known as primers in the world of tobacco) suffer from nicotine poisoning each season. Exposure to harmful pesticides and crowded, unsanitary living conditions in labor camps and remote, substandard trailers add to the woes of an estimated 100,000 immigrant tobacco workers in North Carolina.

"As workers, we have suffered a lot in the field," said Reyes' father, Diego Reyes Sr., a 46-year farm worker who travels each year from his home in San Luis Potosi, Mexico, to work on a farm near Sanford, N.C. (In this photo are Reyes Jr. on the left and Reyes Sr. on the right. They are sitting in the remote trailer that Reyes Sr. shares with five other Latino workers.)

During the past three years, Reynolds consistently refused to meet with FLOC officials, saying it wasn't responsible for what happened in the fields of its suppliers. "We cannot enter a bargaining agreement on the workers' behalf," a Reynolds Board of Directors statement said. "They are not our employees."

It's a view that's typical in the neoliberal model for the global economy followed by Reynolds American and other major corporations, and it echoes a tactic used during the era of U.S. and European colonialism: hiring subcontractors to supply workers and thus avoid responsibility for worker abuses. During the days of the East India Company in British-controlled India this was known as the sardari labor system, and while possibly effective in alleviating guilt feelings among absentee landlords in Britain it only worsened the lot of the dark-skinned workers on the plantations and in the mines of the colonies.

JPMorgan Chase itself has been fighting battles on several fronts in the wake of the 2008 Wall Street crash and the ongoing recession. Hundreds of activists, workers, and religious leaders have protested in more than 200 cities against the company's role in massive home foreclosures. According to the Wall Street Journal, JPMorgan Chase has nearly $20 billion worth of home loans in foreclosure.

In late April, FLOC was successful in getting the British American Tobacco company to agree to a meeting. BAT owns 42 percent of Reynolds American.

Founded and led by the charismatic Baldemar Velasquez, FLOC has scored a number of agreements with major firms, such as Campbell, Vlasic, Heinz and Deans Foods. Perhaps its largest and most significant victory came in 2004 with its agreement with North Carolina-based Mt. Olive Pickles, the largest labor agreement in the South.
Posted by Joseph B. Atkins at 12:51 PM