A Rolling Stones fan says goodbye to Charlie Watts, remembers six decades of fandom and encounters, including winning an argument circa 1965 that they would outlast the Dave Clark Five! 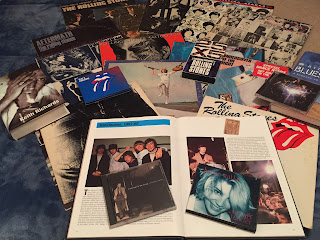 Presenting in the accompanying photo yours truly’s Rolling Stones creds.

I loved this group before I even heard them. As a young teenager I saw a magazine article headlined “Would You Let Your Daughter Date A Rolling Stone?”, and that got me Rolling, then I heard “Not Fade Away” on the radio and there was no turning back.

Charlie Watts’ recent death at 80 is like a personal loss. A great drummer who didn’t like drum solos or the spotlight, jazz man as well as rock ‘n’ roll legend. I had just bought two of his jazz CDs—“Long Ago & Far Away” and “Warm & Tender”—when I heard about his passing. Love you, Charlie.

I’ve seen them three times, including in Raleigh, North Carolina, in 1965–see my $3 ticket stub near bottom right of the photo. Brian Jones was still with them then. “Get Off My Cloud” was their latest hit at the time.

Met Bill Wyman when he came to my town of Oxford, Mississippi, in 2001 to push his blues book, Bill Wyman’s Blues Odyssey, and tightened my lip a tiny bit when the notorious lecher looked at some length at my beautiful daughter Rachel and said, “I’ve always heard the Ole Miss girls are very pretty.”

I once made eye contact with Mick Jagger when he passed by me at the much-respected Lindberg Music Store in Munich, Germany, in circa 1974, where I was working and he was shopping. I didn’t know what to say so I just let him pass by. I had been working upstairs in the store’s warehouse/storage section when my German-born sister Evi, a saleswoman downstairs, came up and said, “Joe, have you ever heard of Mike Jagger?” I said, “Do you mean Mick Jagger?” She nodded. I rushed down, and there he was!

Lindberg was a store famous in Munich for its famous customers. During my four-year stint there—I doubled as a student at the University of Munich—I saw jazzmen Oscar Peterson and Count Basie, French chanson singer Georges Moustaki (almost ran him down as I was dumping trash and didn’t see him on the other side of the big trashbox!), King Hussein of Jordan, orchestra conductor Herbert von Karajan, and many others walk through Lindberg’s doors.

None made the impression that Mick Jagger did, however!

I loved the Beatles, but the Stones were all about grit and rebellion, working class guys who played the blues with a vengeance. Mick’s maracas, and Brian’s harmonica, Bill’s electric base held upright like a shield, Keith like a whirling dervish knees bent and pointing his guitar like the Rifleman’s sawed-off shotgun, and then Charlie, cool, calm, and collected behind it all, laying down the beat that held it all together.

They rocked & rolled hopping country blues like “I Just Want To Make Love To You”, “Little By Little”, and “It’s All Over Now”, Chuck Berry tunes like “Around And Around” and “You Can’t Catch Me”, preached rock ‘n’ roll gospel with Solomon Burke’s “Everybody Loves Somebody”, and rumbled ‘n’ rolled with Bo Diddley’s “Mona”. They made those minor chords cry in songs like “Empty Heart”.

Years later they sang revolution in “Street Fighting Man” and made “Paint It Black” the unofficial score to the Vietnam War. Then showed the Bee Gees and the rest of  that crowd how to really disco with “Miss You”.

The music in their more recent CDs like “Rainfalldown” and “Blue and Lonesome” are excellent , but no one buys CDs any more.

Just this past year, my filmmaker buddy Tom Thurman came for a visit from his home in Lexington, Kentucky. As I was taking him back to the airport in Memphis, he asked me to take him to see a good friend of his in Memphis for a short visit. Lo and behold, that friend was the great music writer Stanley Booth, who wrote what many consider to be the definitive book about the Rolling Stones, True Adventures of the Rolling Stones, back in 1984. The long-haired scribe lives in a modest home with the walls lined with music, books, posters, paintings, the artifacts of a life devoted to art. He signed my copy of his book.

As a young teenager in Sanford, North Carolina, in the early-to-mid 1960s, I defended the Rolling Stones against all attacks. A good buddy of mine once insisted the Dave Clark Five would be around long after the Stones were gone and forgotten. I’d like to pick up on that conversation today!