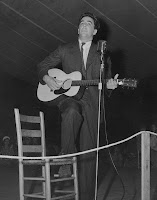 (Alan Lomax at a festival in Asheville, N.C. Library of Congress)

In a 1987 interview, folklorist Alan Lomax told me this great story about meeting Depression-era bluesman Robert Johnson’s mother. Lomax talked to her in her lowly shack in Sledge, Miss., and she described to him how her son got religion before he died in 1938.

Remember: this is the famous bluesman who, legend has it, sold his soul to the devil at the Delta crossroads of highways 61 and 49 in order to master his guitar. According to another legend, he died after a jealous lover (or her jealous husband) poisoned him on the night of a performance at a juke joint in Three Forks near Greenwood, Miss.

“When he was dyin’, they called me there,” she told Lomax. “When I walked in, my son was on his dyin’ bed. He said, `Mama, look on the wall, my guitar is hung up there. I’m givin’ up that devil’s instrument.’”

I thought about that story as I watched another legendary preserver of Southern folklore receive some well-deserved recognition this week. Photojournalist and music promoter Dick Waterman is featured in the cover story of the latest edition of the magazine Mississippi Observer, a product of the Magazine Innovation Center at the University of Mississippi. He also was honored during an event marking the magazine’s launching at the university’s Overby Center for Southern Journalism and Politics.

(Dick Waterman this week at the University of Mississippi's Overby Center)

Waterman, perhaps even better known for his photography of blues and rock musicians like Mick Jagger, Ray Charles, Bob Dylan, and Willie Nelson, has always been a strong champion of musicians’ rights and worked hard to protect often-illiterate bluesmen from financial exploitation. “I don’t like bullies, male bullies, female bullies, financial or corporate bullies,” Waterman once told me. “I tried to be fair.”

The South may be forever the nation’s poorest region, but it is also arguably the nation’s richest in the music and art of its folk culture. A certain fragility always hovers around such culture. People become ashamed of its close association with poverty and rural backwardness. “Progress” always threatens, as does the nation’s corporate culture, which only values what is profitable.

Texas-born Lomax, who died in 2002, traveled the South and beyond in the 1930s and 1940s, discovering bluesman Muddy Waters on a Delta plantation and recording for the first time wandering troubadour Woody Guthrie. His amazing collection of thousands of hours of recordings and film and thousands of photographs and videotapes are now being made available online. In January, the label Global Jukebox released a collection of Lomax’s field recordings to honor what would have been his 97th birthday.

In my interview with Lomax, he told me about his historic discovery of McKinley Morganfield, better known as Muddy Waters, whom some consider the greatest of all blues musicians. Morganfield “was barefooted and he didn’t even own a guitar. I lent him mine.”

Lomax said this about his work. “The whole point was to give voice to the voiceless. This is the century of communication. We (whites) have monopolized the whole communication system. It is a much more severe kind of exploitation than economic exploitation. I have devoted my life to give equity to the situation.”

Dick Waterman has fought a similar battle. He battled lawyers and corporate heads to secure for bluesman Big Joe Williams a 27-year copyright renewal on his classic song Baby, Please Don’t Go. He didn’t want Williams to end up like other bluesmen who went empty-handed while others made millions on their music.

Waterman traveled 4,000 miles in his successful search for Son House, the singer and guitarist who had inspired Robert Johnson, bringing House out of obscurity and into national recognition while he was still alive and able to enjoy it.

In their own way, Lomax and Waterman are working-class heroes. They traveled across the South and knew that beyond its poverty was an unfathomable richness, and they devoted their lives to preserving it and protecting it.
Posted by Joseph B. Atkins at 1:22 PM