From China to Spain to Mississippi, it's "a fight from the cradle to the grave." 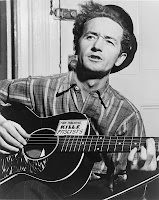 (To the right is Woody Guthrie in a 1943 photograph)

The great balladeer Woody Guthrie pretty much hit the nail on the head in a letter he wrote to Folkways Records chief Moe Asch in 1946:

“I have always said in my songs and ballads that this old world is a fight from the cradle to the grave. … I believe that the real folk history of this country finds its center and its hub in the fight of the union members against the hired gun thugs of the big owners.”

Guthrie, whose 100th birthday will be celebrated in July, was recently redeemed and forgiven by his home state of Oklahoma--after decades of exile--for his pro-worker views. The public in Tulsa now get to see the archives of the composer of “This Land is Your Land” as a result of actions by the Guthrie family and the purchase of the archives by the George Kaiser Family Foundation.

In this round-up of labor activity in the U.S. South and in the Global South, a round-up that shows how both are indeed interlocked and share the same issues and challenges, the truth of Guthrie’s words is validated.

A long-awaited report from the Washington-based Fair Labor Association this week eliminated any doubt about the poor working conditions of the Chinese workers who help produce those iPads and iPhones we enjoy so much, exposing the ugly truth hidden under all the hagiography given the late Apple CEO Steven Jobs.

Those conditions include 60-to-70-hour work weeks at minimal pay, conditions that have led to a number of suicides and which the Apple corporation and its partner in China, Foxconn, say they’re going to remedy. Let’s see if they do. Foxconn has a 1.2 million workforce.

Elsewhere in Asia, working-class folks are being encouraged to stand up for their rights. Political and religious leaders in the Philippines recently urged Filipinos to finish their three-decade-old revolution against tyranny by ridding the country of the corruption left in ousted ruler Ferdinand Marcos’ wake. This comes at the same time of the 35th anniversary of the death of Larry Itliong, the Filipino immigrant who helped Cesar Chavez launch the farm workers movement and the United Farm Workers in the United States in the 1960s.

These events remind me of the Filipino activist workers I encountered during my trip last year to Taiwan, an inspiration to me.

“If you are a caregiver, you work very long hours,” Nelva Baldon, a 32-year-old caregiver and activist from the city of Iloilo in the Philippines, told me in Taipei. “The government needs to do more. We don’t have the laws protecting us. If we are sick, we have nothing. … The employers treat us like slaves. We understand we are workers, and we have to work, but they treat us like slaves.”

Filipino workers like Baldon and Mayanoia are at the forefront of the cause for workers’ rights in Taiwan, said Sister Eulalia P. Loreto of the Migrant Workers’ Concern Desk at St. Christopher Catholic Church in Taipei. “Filipinos think they have to be heard. They are vocal, and they insist on their rights.”

Another interesting and related development is growing interest in the novel, For The Win, by Canadian writer and blogger-activist Cory Doctorow. The novel, discussed in a recently aired National Public Radio report, depicts a “virtual” uprising by young people in China, India and California against their government and corporate bosses, an uprising that may be “virtual” but with broad implications for real-life worker rights.

Certainly a real-life uprising is taking place in Spain, where millions of working-class people have taken to the streets to protest European Union-mandated austerity measures and the anti-labor policies of Prime Minister Mariano Rajoy. In a nation where 25 percent of workers and close to 50 percent of young people have no jobs, workers filled the Puerta del Sol Plaza in Madrid and other locations across the nation this week, waving red union banners, stalling public transportation, shutting down schools and factories, and demanding political accountability as to why leaders see “austerity” as the only solution for Spain and Europe’s economic woes.

Here closer to home, Mississippi legislators, now dominated by conservative Republicans, found themselves facing growing opposition to proposed draconian Alabama-style anti-immigrant legislation after business interests complained about the potential loss of cheap workers and law enforcement officials complained about the impact on their jails. That didn’t keep state House members, however, from reversing an earlier vote on workers’ compensation and approving a bill that, among other things, does the following:

- Requires employees to provide employers with medical proof that an injury or illness is directly job-related.

- Allows employers to test employees for alcohol and drugs whenever an injury on the job takes place.

Jackson, Miss., labor attorney Roger K. Doolittle said the bill is a direct and blatant attack on workers’ compensation and workers. Ironically it comes after a recent non-partisan state government study that showed that workers already get the raw end of the deal as a result of rulings and actions by the existing Mississippi Workers’ Compensation Commission.

Like Woody said so long ago, it’s “a fight from the cradle to the grave.”
Posted by Joseph B. Atkins at 10:37 AM