The year 2012 promises to be an interesting and potentially pivotal one for workers in the South and nation as politicians on the national level vie to steer voter disgust with Wall Street excess to their own advantage, state-level politicians wrestle with the ramifications of their demagoguery, and unions and protesters seek to keep the “Occupy” momentum going. Let’s look at some of the developments unfolding.

“We want our immigrants back!”

In the South, the states of Georgia and Alabama are already paying the price for the racist, anti-immigrant ranting of their political leaders, ranting that led to Arizona-style legislation in both states and a resulting disaster on the farm.

The irony is that illegal immigration is down in this country. The New York Times reported this month that arrests along the U.S.-Mexico border are the lowest since 1972. Immigration continues because poverty continues to push workers away from home in search of jobs. However, the poor economy and the anti-immigrant backlash in the United States is forcing many Latino workers to those places in Mexico, Chili, Argentina and Brazil where there are jobs waiting.

Up in Georgia, meanwhile, “millions of pounds of watermelons were left to rot in the fields” last summer, “along with peaches, blackberries and cucumbers” because of a new anti-immigrant law that scared farm workers away, wrote Coalition of Immokalee Workers (CIW) co-founder Greg Asbed and Sean Sellers in The Nation magazine.

Asbed and Sellers say the same is happening in Alabama, which went a step beyond Arizona and passed what many consider the most draconian anti-immigrant law in the nation. A Mercedes manager, visiting the state where the German automaker has built a huge plant, was even arrested and taken to jail for failing to have his papers, an offense under the new law.

Small towns dependent upon immigrant labor are drying up across the South, fruit is left to die in the fields, and now politicians have to figure out how to undo the mess they created. It’s not that easy. For example, the watermelon picking so necessary to the farm economies of Georgia, Florida and other states is actually skilled labor. Latinos who’ve done it for years know the intricacies of distinguishing various levels of ripeness among watermelons. Replacement workers have made crop losses even worse because of the lack of such knowledge, Asbed and Sellers say.

Republican politicians brought this about, yet they still hope they can pull a rabbit out of the hat. On the national level, they’re touting conservative Latinos like U.S. Sen. Marco Rubio of Florida—a potential vice presidential nominee--in an effort to prove the party’s credibility. However, Rubio comes out of the comparatively small and very conservative Cuban community in Florida and thus is hardly representative of Latinos as a whole.

Mississippi’s newly elected Republican governor, Phil Bryant, earned his political stripes in part by his demagoguery of the immigration issue, pushing, for example, a discredited study showing the alleged high cost of illegal immigration to the state. As a result of the elections, Mississippi now also has a GOP-controlled House and Senate. Will the state learn by Alabama and Georgia’s example regarding immigration? State Republicans like Bryant signed a lot of IOUs to their Tea Party constituencies, and the pressure will be on to deliver.

The UAW targets the South … again 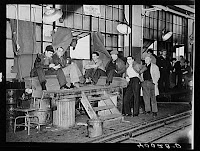 The struggling United Auto Workers, its membership down 75 percent from 30 years ago, is hoping to gain traction in the U.S. South by targeting German-owned automakers in Alabama and Tennessee for organizing drives.

According to Reuters, the UAW sees the Volkswagen plant near Chattanooga, Tenn., and the Daimler-owned Mercedes plant near Tuscaloosa, Ala., as potentially easier to organize than the Japanese and Korean-owned plants in the region. UAW already represents workers at Daimler’s Freightliner trucks plants in North Carolina and other states.

Automative News reports IG Metall “wants to keep the United States from becoming a cheap-labor alternative to Germany” and thus is also working with the United Steelworkers in its efforts to organize a ThyssenKrupp steel plant in Alabama.

UAW tried unsuccessfully to organize workers at Nissan's Tennessee plant and did preliminary work for a possible campaign at the Japanese automaker's Mississippi plant as well as at Toyota's plant in Kentucky. None of these efforts has borne fruit yet, however.

Mini-editorial: The UAW and other major unions have to rediscover their fighting roots, and that means dumping the term “middle class”. Like Barack Obama, Democrats in Congress, all Republicans, and most mainstream media types, union leaders love to talk about the “middle class”, that oh-so-comforting way to describe working people in this country, a term that tells them they’ve climbed a notch or two in our supposedly classless society and which separates them from the lumpenproletariat. No one every fought a revolution or even started a movement with a euphemism meant to mollify rather than inspire. We’re working class, and so is the UAW’s targeted constituency. Call them that, Bob King!

Walmart: Reform or image-building? Oh, come on. You know the answer

After winning its day in court with the U.S. Supreme Court’s rejection of the Dukes class-action sex discrimination suit, Walmart apparently decided its public image needed some more sprucing up. Thus we now have the Global Women’s Economic Development Initiative, a Walmart Foundation creation that supposedly seeks female empowerment through training centers for retail and garment workers in India and Bangladesh and by encouraging women entrepreneurs.

According to The Nation, Walmart President Sylvia Matthews Burwell will head the project, yet she will report to Walmart Corporate Affairs Executive Vice President Leslie Dach.

Hmmmm. Is this one of those wait-and-see, the proof-is-in-the-pudding situations?

I’m not encouraged by the fact that Walmart, after responding to earlier criticism and improving its poor benefits to employees, announced in October that it was cutting back health care coverage significantly for part-time workers as well as raising premiums for full-time employees. Just as discouraging is the fact that Walmart fired 22 workers in Chili for taking part in a nationwide general strike to promote tax reform, new labor laws, and other social justice issues.

Walmart was the only company in Chili that fired its workers for joining the nationwide protest.
Posted by Joseph B. Atkins at 10:08 AM