Lady Day at Emerson’s Bar and Grill, a review 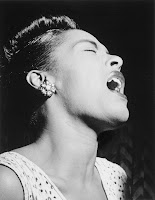 (To the left is Billie Holiday, a 1947 photo from Down Beat magazine)

MEMPHIS - Billie Holiday rocked America when she first sang “Strange Fruit” back in 1939. Radio stations banned the song, Southern politicians fumed, and black people nodded their heads with admiration at a black female singer who had the guts to tell the true story of the evil of lynching in the U.S. South.

So when jazz singer Joyce Cobb sang “Strange Fruit” during her performance Thursday night as Holiday in the Hattiloo Theatre production of Lady Day at Emerson’s Bar and Grill, I was struck by the power that a great protest song can have 70-plus years after it was conceived.

Lady Day at Emerson’s Bar and Grill is a rich and intimate experience for those who come to the tiny theater near downtown Memphis, just a stone’s throw from the Sun Records studio. The Hattiloo offers black repertoire theater and is becoming one of the cultural treasures in the city on the bluffs of the Mississippi River.

Written by Lanie Robertson and directed by Emma Crystal, the play features Cobb in the lead role backed by Gerald Stephens on piano and 17-year-old Philip Andrew Joyner III on stand-up base. The scene is the Philadelphia, Pa., nightclub where a broken Holiday sang just months before she died in July 1959. Years of heroin and alcohol abuse had cost her a year of freedom in a West Virginia rehab center and the loss of her license to play in New York’s jazz clubs. When she took to that stage at Emerson’s, she was a shadow of the star with the gardenias in her hair who had performed at Carnegie Hall and with Count Basie, Benny Goodman, and Artie Shaw.

Cobb, a nationally known jazz singer who lives in Memphis, is a natural in this role even though she sings in her own voice and doesn’t try to mimic Holiday. On stage, she magically becomes Holiday, damaged goods and all, a pretty wreck you want to rescue but know you can’t. It’s too late. You see it when Lady Day returns from her break, another shot in her veins, voice slurred, her will fighting, however, through the fog to finish what she started.

Stephens plays her lover as well as her pianist, and he’s good on both counts. Holiday always had a lover, usually to her detriment. You hear that, too, when Cobb does “Don’t Explain”, a classic that’s still a bit scary, even masochistic, in its utter submission to a lover’s will.

Stephens’ piano does occasionally overpower Cobb, but maybe that’s something that happened at Emerson’s, too, back in 1959. I’ve got a copy of Holiday’s last album, “Lady in Satin”, the once-great voice trembling, sometimes breaking up. Wasn’t much needed to overpower it.

I also have a tattered paperback copy of Holiday’s 1956 autobiography, Lady Sings the Blues, which she wrote with William Dufty. Some say you can’t believe everything she writes in it, but it has one of the greatest openings of any book ever written: “Mom and Pop were just a couple of kids when they got married. He was eighteen, she was sixteen, and I was three.”

Holiday’s life was indeed a tale worth telling. Born in Philadephia in 1915, she grew up in Baltimore, was raped by a neighbor at the age of 11. Her mother worked in a series of brothels, taking her daughter along. After Holiday got her start in music, she rose quickly, getting her nickname “Lady Day” from Mississippi-born saxophonist Lester Young. A boyfriend and fellow musician turned her on to heroin in the 1940s, and she was never the same. When she died in 1959, 3,000 attended her funeral in New York.

Hers was a tough, scary, hardboiled way to live a life, and Cobb admitted during a conversation with the audience after the production that playing the singer with truth and honesty takes a lot of commitment and lots of practice. For Holiday, that was just life, and a lot of times she wasn't very successful at it.
Posted by Joseph B. Atkins at 12:50 PM