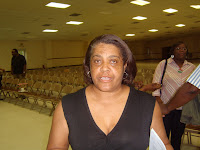 Two years after the North Mississippi Rural Legal Services laid off workers, slashed wages up to 19 percent, and eliminated needed programs for the poor, the agency is now shutting down its office in the region's largest city and eliminating a unit that handles public benefits issues.

"The struggle for legal services in North Mississippi goes on," said Elaine Lantz, regional organizer with the National Organization of Legal Services/UAW Local 2320. The union represents workers at the agency.

The agency covers 39 counties across northern Mississippi and helps clients with food stamps, Social Security, Medicare and Medicaid, evictions, and other needs. Dependent on federal and state grants and other funding, it has faced budgetary cutbacks now for years, resulting in decisions two years ago to eliminate a unit that helped those facing eviction from their homes and to transfer half its small staff of lawyers off courtroom duty and onto full-time "hotline" telephone duty.

With the budget crunch still continuing to deepen, the NMRLS board this week decided to shut down its Tupelo, Miss., office--which served 10 counties--and relocate its services to the agency's office in Oxford, Miss. "Cuts necessitated that one office must be closed," NMRLS executive director Ben Cole told the Oxford Eagle in Oxford. "The overall effect this will have on legal aid services is not yet known, but it is going to directly impact clients in the Tupelo area."

With the closure of the office in Tupelo--north Mississippi's largest city--the NMRLS will have four remaining offices across the region, including the Oxford office.

Lantz said "one thing that is very bothersome" is that the board of directors is currently raising "outside" non-program money to build a new building for its offices in Oxford. "In a time when funds for legal services are shrinking, it does not make sense to spend time raising money for a new building. Any fund raising efforts should go toward maintaining client services."

In a public hearing on NMRLS cutbacks in August 2009, Nancy Jones, then 54, a mother of three and grandmother of six, said legal services helped get her unemployment checks restored and eliminate a $4,100 fine imposed on her by the state because she had unknowingly failed to meet a requirement that she re-register with a temp service after a series of layoffs from several jobs.

"We were out in the street, looking for a job, unemployed for eight months," Jones said. "I was already poor. A lot of us out there don't have no job, no money. I know I didn't have money to pay for an attorney. ... I don't know what I would've done."

At that same hearing, veteran paralegal Henry Boyd warned, "You've got the wolves out there waiting for the NMRLS to go down. Who's going to serve these people? Let's don't cut our help to poor folks."
Posted by Joseph B. Atkins at 8:44 AM