Money rules, and that's why we should "Occupy Wall Street" 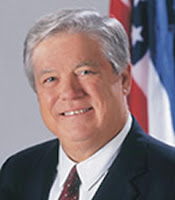 (To the left is Mississippi Governor Haley Barbour)

Haley Barbour, the stalwart Republican and former Washington lobbyist who is now ending his second term as Mississippi’s governor, has no problems with the big money now pouring into political campaigns.

“Money is speech in American politics,” Barbour told a crowded auditorium at the Overby Center for Southern Journalism and Politics at Ole Miss recently. “What we need are unlimited contributions that are transparent and made public in real time.”

Furthermore, big money is the best weapon conservative Republicans have against the manpower labor unions can put into an election on behalf of Democrats. Labor unions were able to put 10,000 volunteers on the streets during an election in Cook County, Illinois, last year, the governor said. “Their political strength was manpower.”

In other words, deep pockets versus people.

The governor is a smart politician. He knows the ways of politics today. It’s a system he helped put in place during his days as a Republican operative and then a well-heeled lobbyist in the nation’s capital.

In that system, money is everything. Politicians spend the lion’s share of their time begging for it, and then when they get it, they spend the rest of their time serving those who gave it to them. It not only buys air time for political ads, it buys entire television networks like Fox News and radio programs like Mississippi Super Talk Radio, where the corporate agenda is pushed onto people whether they want it or not.

“Wealth is virtue,” says the gangster Vautrin in Honoré de Balzac’s novel about greed, Père Goriot. That’s the philosophy today for the 1 percent that essentially rules this nation, and that’s why protesters have gathered in Zuccotti Park—renamed Liberty Square--in New York to “Occupy Wall Street” and why protesters from Jackson to Memphis to Madrid have joined them. What about the other 99 percent?

“Those who worship money believe their buckets of cash, like the $4.6 million J.P. Morgan Chase gave last week to the New York Police Foundation, can buy them perpetual power and security,” author Chris Hedges wrote in The Occupied Wall Street Journal, the newspaper of the protesters in New York. “Masters all, kneeling before the idols of the marketplace, blinded by their self-importance, impervious to human suffering, bloated from unchecked greed and privilege.”

The Koch brothers are major supporters of the American Legislative Exchange Council (ALEC), an organization that writer Mark Pocan calls “a dating service” that matches “legislators and special interests, culminates with the birth of special interest legislation, and ends happily ever after.” ALEC’s corporate friends include Walmart, British Petroleum, Chevron, State Farm, and, of course, Koch Industries, Inc.

ALEC tries to do on the state level when the Koch brothers are doing on the national level. Aiding them are political bosses like Art Pope of North Carolina, the multi-millionaire C.E.O. of Variety Wholesales whose deep-pocketed political machine helped Republicans win 18 of 22 legislative races and take over the General Assembly in North Carolina in 2010. One of Pope’s key targets is higher education in North Carolina, which he feels is too dependent on state funds and too populated by liberals. His goals also include embedding pro-corporate courses championing conservative writers like Ayn Rand and Friedrich Hayek in university curriculums.

To check out the good investigative work that the North Carolina-based Institute for Southern Studies is doing on Pope, who also has played a role in Herman Cain’s rise to prominence, go to http://www.artpopeexposed.com.

In view of Pope’s activism in North Carolina, the actions of the so-called “Forward Rebels” group in Mississippi bear watching. The group is talking football now, using newspaper ads to blame the University of Mississippi football team’s losses on the Ole Miss administration, but its chief media officer, Lee Habeeb, is a conservative radio talk show boss who recently spoke at a Tea Party rally in Oxford. What is its ultimate agenda? Some believe it's to make Ole Miss a conservative think tank where right-wingers like the Koch brothers and Art Pope can come and be treated like royalty.

Only time—and maybe money—will tell.
Posted by Joseph B. Atkins at 7:23 AM