Wal-Mart vs female employees, and Wal-Mart vs. retail workers in South Africa 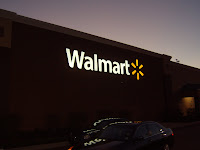 Wal-Mart greeter Betty Dukes' nine-year-old discrimination case against her employer has finally reached the U.S. Supreme Court, and a decision is expected any day now as to whether she and thousands of other female employees actually have a basis for a class-action claim against the company.

Wal-Mart, the world's largest retailer and strongly backed by the U.S. Chamber of Commerce, claims lower court rulings accepting the class-action suit are wrong and that allegations of a systemic practice of discrimination against women is ridiculous. Dukes and others say many female workers at Wal-Mart not only get the short end of the stick in pay raises and promotions but are subjected to discriminatory and insulting treatment by management at the workplace because of their gender.

Remember: this is the same Supreme Court that in January opened the floodgates to the corporate financing of American politics, so Betty Dukes and her colleagues are up against a Goliath indeed.

Meanwhile in South Africa, leaders of the 150,000-member South African Commercial, Catering and Allied Workers Union (SACCAWU) have threatened to go on strike if Wal-Mart is successful in its efforts to take over Massmart, which has discount retail stores spread across the continent with plans to open dozens more.

Wal-Mart is positioned to take majority control of Massmart shares if shareholders agree to it, setting the stage for a major invasion by the virulently anti-union, Arkansas-based retailer to spread the gospel of Sam (Walton, the company's founder) to Africans: cheap goods provided by a cheap multi-billion-dollar company whose low-paid U.S. employees often have to depend on Medicaid and Food Stamps to survive.

It'll be interesting to see how a stand-off between corporate Wal-Mart and a union with strong connections to government in Africa might turn out.
Posted by Joseph B. Atkins at 4:41 PM